Yesterday HBO Max add Chuck series, to the streaming service, staring Zachary Levi! I had never seen the show, but will finally get to watch it soon.

By the way DC Universe Infinite has a 6 part comic based on the series, here’s the first issues… 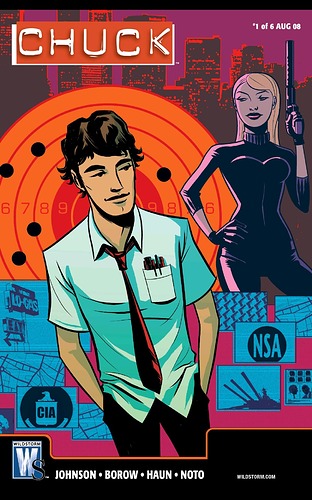 I hope the show is worth watching.

I didn’t know the comic was a DC property - how neat!

Zachary Levi! Interesting. (How am I supposed to watch this without pointing to the screen every 5 seconds and yelling “SHAZAM!” ?

I’m also gonna start that comic today! Thanks for bringing it up @Reaganfan78. It sounded familiar since I’d only faintly heard of the original series, but I didn’t know it was a comic, much less one available to me right here

I didn’t know the comic was a DC property - how neat!

It technically isn’t. WildStorm published the comic, but they’ve published comics based on properties that had nothing to do with DC before, chief among them some Star Trek books, along with Friday the 13th and A Nightmare on Elm Street.

Chuck as a TV show was pretty damn great (and why Yvonne Strahovski hasn’t been a LA Black Canary is a mystery, because she’d be perfect for it) while the comic, if memory serves as I haven’t read it since it came out, was pretty good, and did a serviceable job of capturing the flair of the show on the page.

My favorite dialogue exchange from Chuck (the show):