Check Out Jackson Hyde's Coming of Age Tale in Aquaman: The Becoming 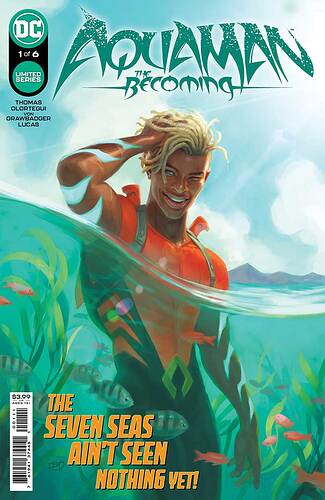 It should be a good time to be Jackson Hyde. After existing under the radar for much of his life, the young hero has found acceptance and honesty in his relationship with his mother, made peace with the truth about his father and been embraced by Aquaman, Mera and the people of Amnesty Bay. Now, with Aquaman focused on raising his daughter, Andy, Jackson is ready to step up to become the hero the people of Atlantis and the world will need.

And then it all comes crashing down on him.

Written by Brandon Thomas and drawn by Diego Olortegui, Aquaman: The Becoming is a six-issue miniseries that will shine the spotlight on the DC Universe’s newest Aqualad for the very first time. However, as Jackson’s quickly growing fanbase can tell you, this character symbolizes far more than just the continuation of Aquaman’s legacy. As a Black, gay hero who’s destined—at least according to DC Future State—to mentor and fight alongside the also LGBTQ+ Andy Curry when she eventually becomes Aquawoman, Jackson is primed to lead one of the more fascinatingly diverse corners of the DC Universe. The future of the DCU’s Atlantean superheroes is decidedly queer, and it starts this September 21st with the release of Aquaman: The Becoming #1.

To read an interview with Brandon Thomas and learn more about this coming of age tale, head over to DC Comics!

Are you excited for this new miniseries? Let us know in the comments!

I like the character and the art looks good but I’m disappointed that DC is going with Future State. I liked those books as miniseries but it’s not a storyline I want to see become permanent (not that anything does with heroes). With the exception of aged up Jon Kent, I think these characters would all be interesting to follow but not as they become replacements for the classics.

When this was announced I was curious but a little cautious. Loved Aqualad, both as Kaldur in YJ and Jackson in the comics, but I wasn’t sure about him being THE Aquaman, since it feels like it hasn’t been that long since he was introduced proper in the regular comics.

But from what I’m seeing from this interview, it seems like they’re creating this with that apprehension in mind, really testing Jackson’s mettle to prove he’s worthy of the title. I’m definitely curious to see where this goes.