Check out Babs all grown up! (Gotham)

Little Barbara Lee Gordon aka Batgirl/Oracle all grown up.

Pic from the promo of the last episode, the season finale of GOTHAM!!! 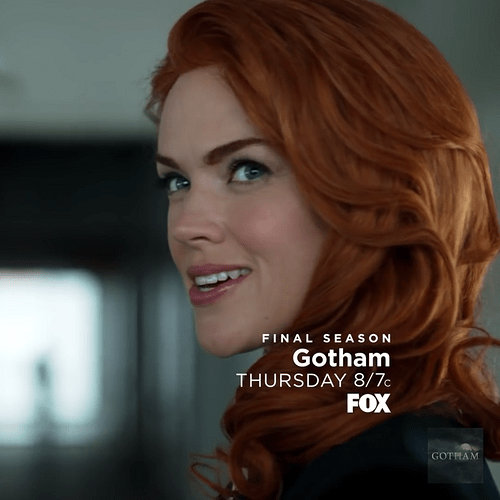 Did they just put a red wig on the woman they have playing Barbara Keene?

Yeah, and she looks amazing as always<3

I’m glad they just let her play the daughter because she has the right look for it and is virtually capable of pulling off any look.

Unless they casted Kacey Rohl, a red wig on Erin Richards was truly the best choice

I’m not sure that’s supposed to be the young Barbara grown up. Mind you, I could be very wrong here, but I remember at New York Comic Con they said the time jump would be ten years. So unless Ivy gave a ten year old the same chemicals that aged her up, I’m gonna say this is just an older Barabara Keane who managed to turn her life around.

Again, I could be wrong and we won’t know until Thursday night.

That being said, she looks very pretty as a red head.

Yeah. I was wrong, it’s only a 10 year jump into the future so this is to reveal that Barbara Kean is a natural redhead so that people don’t question Barbara Gordon having red hair - so maybe they’ll have a kid Barbara running around that they haven’t revealed yet.

@Gibbyhertz I agree. I’m glad she survived because I thought for sure when Nyssa found her and the baby that she was gonna be a goner. She earned her redemption.

Barbara Keane looks great in the flashforward! I agree, that Barbara went with her natural hair color to match with her baby girl. I do think they showed 10 year old Barbara Gordon in the promo. There is a quick shot of Jim hugging a little girl with a light purple sweater on, and I could’ve sworn that the little girl had red hair.

So Barbara Keen finally turned fully good and married Jim or is she still a villain and a baby mama?

Yeah, that was already established long ago…

Now Barbabra and Lee are basically inseperable, really good friends despite the past. Gotham has a way of doing that with characters, making enemies into friends that is. Like Penguin and Riddler.

Unfortunately, there’s no edit button yet so… :-/