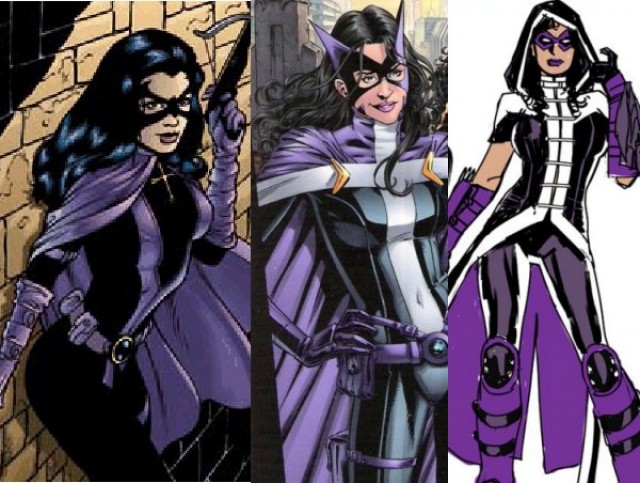 HELLO ONCE AGAIN CHARACTERS OF DC MEMBERS. WE HAVE REACHED WEEK FOUR AND THE CHARACTER OF THE MONTH FOR FEBRUARY IS HELENA BERTINELLI AKA THE HUNTRESS.

She was born into a mafia family and turned herself into a tool for vengeance after her family was murdered leaving her the only survivor. As the Huntress she hunts down those who would prey on the innocent. She also had a brief stint as Batgirl during the No Man’s Land storyline and has been a member of the Birds of Prey and also was the Matron of the spy agency Spyral in Grayson.

There were other Huntresses before her the most famous one being Helena Wayne who was wiped out in COIE.

WHO IS THE HUNTRESS YOU ARE MOST FAMILIAR WITH?

Readings for this month :

If there are any questions feel free to DM me @JasonTodd428.

That’s all for this month folks!

I’m going to confess something up front here and now. I was not a fan of Helena Bertinelli’s Huntress back in the day. I always felt she was nothing more than a usurper taking on the mantle of a character who who was sent to limbo. (Sound familar to anyone.) I also hated the fact that here was the first Italian character I’d run across that was not an outright bad guy and she was sterotypically the member of a mob family even if she has no love for the mob. (I’m of Italian decent and it annoys me to no end whenever I see Italians portrayed as being part of the mob in media as if that is the only possible option.)

Having said all that I have to say that reading these selections has given me a new perspective and appreciation for the character.

Cool – I’ve read a nice chunk of her later appearances, but never really read any of her early appearances. This should be fun.

I’m not a fan of some of the art here but the early stories were fun to read for me, especially given that the passage of time has softened my original stance on the character.

I prefer Helena Wayne over either version of post-Crisis Huntress (and I prefer Barbara Gordon over both, for that matter), but I think the 1989 origin for the character works better for me than the tweaked one that appeared in the early 2000s. I’m also not a fan of how the character turned into little more than someone for Batman to scold all the time.

I do prefer Helena Wayne Huntress to later versions but I liked the 89 origin of Helena B. better than the tweaked one fron the 2000s.

I was a bit too young to have a real appreciation for the Helena Wayne version. I did read America vs the Justice Society and the first Crisis in real time, so I was familiar with her, but that was about it. So I Bertinelli was my Huntress so to speak. I collected this first series but it’s been a long time since I read them and, truthfully, they didn’t age well from me perspective. I like the broad strokes of this origin, but, man, that was a bit of a slog to get through. Part of that may have been the art…I really wasn’t feeling that.

Yeah, the art in those issues wasn’t my cup of tea either. I also didn’t really care for the costume much either.

Yeah, not too into her costume in this series. It’s funny that in the second issue one of the cops refer to her as a flying nun when I’ve never seen a nun show off her thighs like this.

I tend to prefer either the redesign that Nicola Scott gave her in the tail end of Simone’s BOP (and it’s tweaked version from just before Flashpoint and who we thought was Helena Bertinelli wore in the New 52 Huntress mini-series): 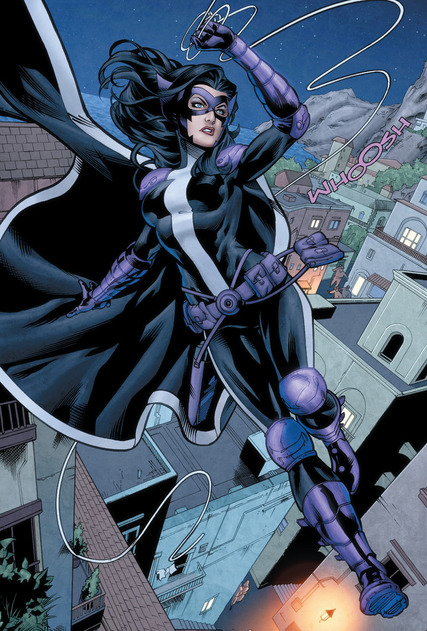 And her current Rebirth-era outfit: 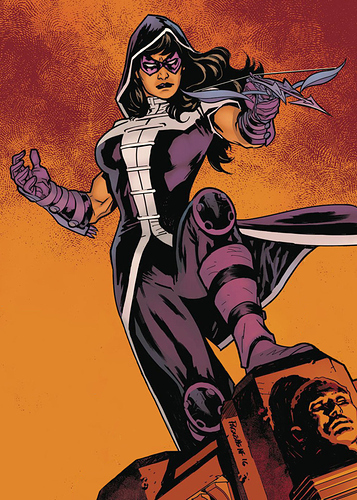 Yeah that bit of dialog was odd.

I also really like those later costumes. I thought the Rebirth redesign was a really good one.

So I finished up the reading for this week, and overall I thought it was decent. Not as good as some other Huntress focused books, but still, it was pretty interesting to read the first Helena Bertinelli story, and I’m half-tempted to keep going with this series after, especially with the promise of wilder things to be revealed after Helena got her revenge.

Though one thing about this origin that I’m not sure I like is the childhood molestation aspect. While I get that it’s something that sadly happens, it almost feels like “too much” and yet not really properly talked about, if that makes sense. Like if they’re going to go that direction, they should make that more of a forefront than a minor plot point.

Though one thing about this origin that I’m not sure I like is the childhood molestation aspect. While I get that it’s something that sadly happens, it almost feels like “too much” and yet not really properly talked about, if that makes sense. Like if they’re going to go that direction, they should make that more of a forefront than a minor plot point

I feel that way about this particular plot point too. If a writer wants to bother mentioning something like this then they definitely need to follow through with it.

Yeah, I think if they wanted to use that, they should have had Helena directly confront her abuser, not have it be explained away that her trainer took the guy out before she even knew who he was.

That’s the thing. Writers mention some sort of trauma a character has gone though and maybe even shows us the event and then they blow it off with something like this and the victims are okay not only with that but are also seemingly fine overall. It’s irratating.

Hi everyone! I’m back after some work craziness. I’m looking forward to getting back into the comics; but I can’t get any of the links to work. Does anyone know how to make them connect? Thank you!

@AlexCarr The links seem to be working for me. The links are taking you to either the main pages for comics listed (such as The Huntress (1989) or they are linked to the first issue of a group of them that we are reading.(such as Birds of Prey (1999). There is a character limit to posts and it includes the characters in links so unless it’s absolutely necessary I will not be linking each individual issue anymore.

I was able to get it to pull up in a different device. I’ll have to see why the app isn’t working. Thank you!

Glad to hear you got it working @AlexCarr. I look forward to hearing what you think of these issues.

Dove into the first three issues of the 1989 series. I do like both Bertinelli and Wayne. I remember Helena Wayne well from her Earth 2 stories and she along with Power Girl acted as a bridge in age between the original heroes and Infinity Inc.
While the Huntress 89 is mired in late 80s comic bookness, it’s still a very good idea. You should be able to describe your superhero’s story and motivation in a single sentence. “Surviving member of a mob family massacre seeks revenge and justice.” That’s good. The mechanics of how she got their will get improved later in books like BoP.

Started the second week of books with Robin III. So far she doesn’t seem to be much of a big part of this, but as a Tim story it’s okay – first appearance of Adrianna, a sort of would-be girlfriend for Tim, that was interesting to see.