The recent topic about old 1930s-40s comics got me thinking, what DC characters that were introduced before Superman or Batman are still around or have made recent appearances? As a big history nerd I was shocked to see Slam Bradley appear in the Batwoman TV series! That’s a character that debuted in Detective Comics #1! And of course there’s the Crimson Avenger, debuted in Detective Comics #20 and made a bunch of appearances (and a 1988 mini-series). So what other more obscure characters can you think of that originally were created in these early days of comics that are still around in some way today or in recent years?

Rose Psychic, who was introduced alongside Dr. Occult in 1935, plays a major role in the current Books of Magic series!

Zatara, who debuted in the same issue as Superman, is a major part of Zatanna’s ongoing character arc in Justice League Dark.

The original Tigress also dates back to those early Zatara stories in 1938. Today she’s been reinvented as the mother of Artemis Crock in DCU’s Young Justice.

Slam Bradley was based in Cleveland before they moved him to Gotham. Gotham was originally a version of Cleveland. However, it was placed in NY. I love Slam. Trail of the Catwoman was a great comeback for Slam. A love interest rarely discussed was him & Selina.

Robotman was a different character during the original Tigress/Sportsmaster days too. Also, he was a constant pain for Alan Scott .

It would be fun to see the original Robotman show up in Doom Patrol Season 2.

Zorro was around since 1919, not sure if he count, in my opinion he did make way for Batman who came 20 years later.

Look at the topic below the Road to the Trinity

This topic is the prequel to my Super Hero History Topic. This topic explores mythological, fictional, pulp magazines, silent films and radio shows that influenced the creation of the Trinity: Superman, Batman and Wonder Woman. Please review and correct.

DC has Speed Saunders, who first appeared in Detective Comics #1, and was more of an adventure character. However, in the late '90s, he was retconned into being the grandfather of Kendra Saunders (Hawkgirl). 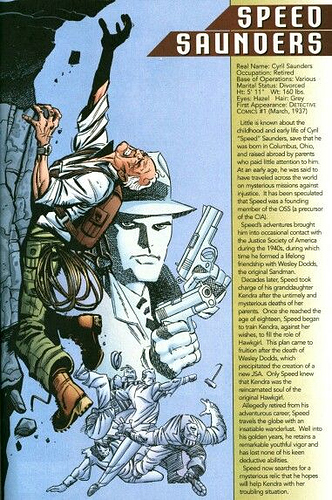 Stopping outside of DC Comics, there are two important comic strip heroes, both created by Lee Falk: Mandrake the Magician (1934) and The Phantom (1936). The latter character is still featured in new strips and is extremely popular in Australia and the Nordic region. The Phantom is also considered to be the first fictional hero to 1) wear a skintight costume and 2) to wear a mask with no visible pupils (both of which became superhero standards).

From my other topic

History of the Super Hero genre by medium

As shown above, Siegel and Shuster had worked for the Company that became DC Comics for two years before Action Comics 1. They were not unknown teenagers to DC but known, experienced talent.

I did not know about these characters thx

It’s my fan! And also I think the Phantom might of came before them, but I may be wrong

The phantom was actually one of the characters that inspired batman.

Oh ok, thank you for helping me out there