Do you absolutely need to know where to find the complete history of a character you’d like to read up on? Look no further than CHARACTER CHRONOLOGY, my feature detailing every appearance of your person of interest!

Today, we explore the publication history of the man who gets you where you need to go, from Takron-Galtos to Supertown, New Genesis: Space Cabbie!

MYSTERY IN SPACE #21, 24, 26-29, 31-47 (1956-1958): Created by Shazam! scribe Otto Binder, the first Space Cabbie stories appear in this silver age science fiction anthology, and against all odds proved to be one of the magazine’s most enduring recurring features. Until recently, Space Cabbie (also spelled Space Cabby, real name unknown) was a denizen of the 22nd century, and all of his stories took place in the nebulous future of the DC Universe.

DC CHALLENGE #7-8 (1986): In 1983, a bizarre idea was born during a party amongst DC’s staff at San Diego Comic Con: what if there were a round robin comic series, each issue by a different writer and artist, where the next team was forced to pick up wherever the last one left off, no matter how complicated? Three years later, DC Challenge was born - an increasingly convoluted 12 issue romp to the very outer limits of the DC Universe. Along with many, many others, Space Cabbie figures into the story in Paul Kupperberg’s issue to help Alanna Strange out of a jam, a role which continues into Gerry Conway’s issue.

TWILIGHT #3 (1991): In this early 90s miniseries, writer Howard Chaykin aims to give closure to many of the DC’s discarded sci fi characters of yesteryear. Here, Chaykin seals the fate of Space Cabbie alongside such Silver Age heroes as Manhunter 2070, Star Hawkins, the Knights of the Galaxy, the Star Rovers, and Tommy Tomorrow.

THE BOOKS OF MAGIC #4 (1991): In the final issue of Neil Gaiman’s miniseries exploring time and magic in the DC Universe, the enigmatic Mr. E guides the young Tim Hunter further and further into the future, until they reach the end of time. But well before their terminus, Space Cabby drops by to say hello.

LOBO #21 (1995): The first post-Zero Hour appearance of Space Cabbie affixes him in the modern day DC Universe, as Lobo is forced to call on his services when his hog breaks down.

STARMAN #55 (1999): In this Rashomon-style tale told from multiple perspectives, the Silver Age sci-fi heroes Space Ranger, Ultra the Multi-Alien, and Space Cabbie himself all tell tales of rescuing Starfire from space pirates alongside Jack Knight (Starman) and Mikaal Tomas (Starman). But which “Starfire” do they mean? You can read this one on DC Universe now to find out.

SUPERMAN AND BATMAN: WORLD’S FUNNEST #1 (2000): Pretty much every version of every character who’s ever existed appears in this multiverse-wrecking brawl between Bat-Mite and Mr. Mxyzptlk, and Space Cabbie is no exception.

JUSTICE LEAGUE ACTION Ep. 32, “Boo-ray for Bizarro” (2017): Bizarro becomes Earth’s last hope when Amazo attacks the Justice League, and calls upon the greatest hero he can think of for help: Space Cabbie, naturally.

HAL JORDAN AND THE GREEN LANTERN CORPS #14-17, 23, 44, 46-47 (2017-2018): On the back of Space Cabbie’s newfound popularity from Justice League Action, Robert Venditti reinvents Space Cabbie as a Han Solo-like smuggler with an ear to the galactic underworld who can get you anywhere in the universe, no questions asked, for the right price. He also happens to drive a black and yellow checkered space cab. I love comics.

THE KAMANDI CHALLENGE #12 (2018): Remember the DC Challenge from 1986? Publisher Dan DiDio loved the idea so much, that he wanted to try it again. 12 teams of writers and artists, each picking up where the last left off, but it would all focus around Kamandi, the Last Boy on Earth. In the final issue, Brother Eye gives Kamandi a glimpse into an entire spectrum of alternate possible futures - one of which includes our favorite driver.

ADVENTURES OF THE SUPER SONS #3-4 (2018-2019): Stranded in deep space, Robin and Superboy hitch a ride with Space Cabbie back to Earth.

MYSTERIES OF LOVE IN SPACE #1 (2019): In this year’s sci-fi themed Valentine’s Day anthology special, Space Cabbie finds unexpected romantic attention from his onboard computer, in a tale appropriately titled “GPS I Love You”.

Is there a character you’re chasing down to learn more about? Let me know and I may feature them in the next CHARACTER CHRONOLOGY! 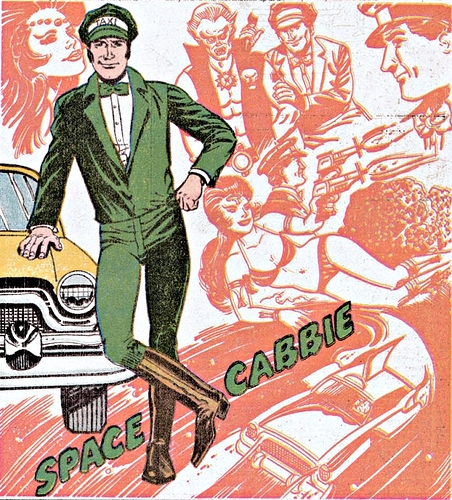 This was a lot of fun, look forward to more of these.

Thanks for the deets HCQ. I had that issue of JLU SC appeared in but never recognized him at the time.

Thanks to CountMacdaft for the character suggestion!

Thanks! I dug out my copy of Lobo 21 (not really, its in digital but it sounds better this way) last night and reread it. Loved it all over again. Plan to check others out later to see what else I might have.

Thanks for the work you put into this!

Justice League Action was were I was introduced to Space Cabbie & I thoroughly enjoy the character. Induces Smiles for me Everytime! Have only caught tidbits of info on him here & there, Thank You! That was Super!

I love these detailed chronologies of characters I’ve never heard of. keep it up

Thanks for the Chronology! I look forward to more of these!!

I love Space Cabbie!!! Makes me happy seen him pop up in Justice League Action in episodes. Really wish they put him more in comics. Just him popping up in a panel or two…He pops up I’m Green Lantern in one Month and then next month he shows up in Superman.

I know he’s not as obscure, but how about Nightwing? I just finished ismahawk’s YouTube series on the character, so I’m itching for more content!
I’m also a sucker for Batfam Team-Ups, so a “Chronology” on the Bat’s kiddos would be the bomb.com!