We now return to the third installment of CHARACTER CHRONOLOGY, already in progress. In this feature, I go through the publication history of the obscure characters you demand to know. In this two parter, we’re covering the role 40th President of the United States Ronald Reagan played in the DC Universe. When we last left off, Reagan had taken his most decisive action yet by declaring martial law and outlawing super heroics in the US. Fortunately, that all got sorted out by the end of the LEGENDS storyline… but Reagan was involved in the superhero community now, and there was no going back. And so, the last two years of Reagan’s tenure entail interaction with quite a lot of costumed individuals.

(Please note that for the purposes of this exercise I am omitting comics which fall outside of the DC Universe, such as MAD Magazine, The Shadow, or Doc Savage. However, appearances in alternate DC Universes are documented.)

And that’s a wrap on Ronald Reagan in the DCU! A man who trusted Superman, his First Lady, and few others, who made overtures of peace towards his enemies but always remained wary of them, and always did his best to do right by America—as long as the game wasn’t on.

[Which obscure characters would you like profiled? Sound off below, and they may just be the next feature!] 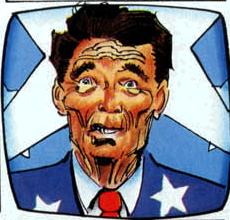 Awesome job! My hat’s off to you.

This may not be obscure enough for your talents, but I’ve always been intrigued by Ragman. Game on!

I’m really impress! You know your President Reagan in comic history, now I’m going to try find the comics he’s in at the DC comics library! Thankyou so much for the information HubCityQuestion.

Cheers pal, this is unbelievable research and remembrance! Next Jelly Belly is on me, or trickle down good vibes

I got a question, why was Reagan in so many comics, but other presidents haven’t been in much?