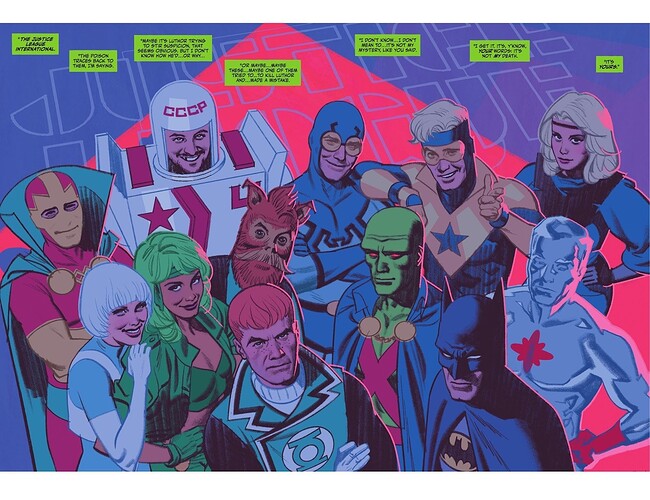 The new twelve-issue Human Target series from DC Black Label is the story of a slow, slow murder. One that the dying Christopher Chance has twelve days to solve, only because it’s the last thing left for him to do. “Human Target” is an apt name for what the man does, after all. Since his debut in 1972’s Action Comics #419, Christopher Chance has specialized in impersonating his clients and uncovering their would-be assassins by drawing himself into the line of fire.

In this month’s Human Target #1, drawn with an appropriately similar early ’70’s detective story aesthetic by Greg Smallwood, it’s a case impersonating Lex Luthor himself that proves to be Chance’s fatal one, succumbing to what evidence suggests is a poisoned coffee, containing trace particles from another dimension—a dimension which had only been visited by the roster of the Justice League International. Hard to believe, but that’s where the evidence lies. So the question is, which of these heroes tried to kill Lex Luthor? Or, perhaps, Christopher Chance? More clues will surely present themselves as the series continues, but…we have some early thoughts.

To read our case for each of the members of the Justice League, head over to DC Comics!

Have you checked out The Human Target #1 yet? Let us know in the comments below!

I enjoyed the first book. The art is great and helps set the tone of the story. I am interested in who it was that poisoned him!

The art was fantastic and Tom King excels at the 12 issue maxi-series format. Already wanting the second issue.

I would love to have that picture of JL above as a wallpaper.

Great first issue. Looking forward to the rest of the series

Seriously though, great first issue, definitely looking forward to seeing where it goes.

I’m really curious to know if this is supposed to be in continuity. Probably not, given King’s tendency with these Black Label miniseries, and he’s doing Supergirl in continuity and said so, but you never know.

I don’t think this is in continuity. Black Label books are usually not, no matter who the writer is. I think the thought behind that is that these books are aimed at adults and they don’t want the kiddos to miss out on continuity stuff.

Not completely true, I think. Most of Black Label is out of continuity, but they’ve branded Year One as Black Label.

Ah, yes. The great rebranding. All-Star Superman is also Black Label. They have rebranded a few classics or past Vertigo titles to Black Label in hopes of gaining a new audience. The new books are meant for an adult audience. The rebranded books might fall into continuity but that is just pure luck at this point.