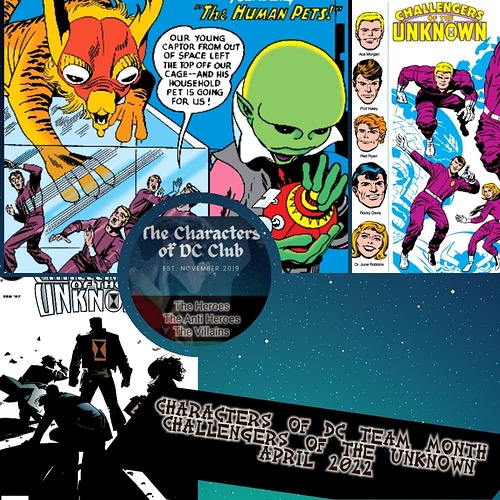 Hello all and welcome to the April session for the @CharactersOfDC Club. This month we will be taking a look at several stories that feature a team that, in my opinion, doesn’t get as much attention as it should.

You all know the drill by now. Every week for the next three weeks I’ll post that week’s issues to read and also include interesting bits of information as well as a a question or thought that came to me as I was reading those issues as a way of hopefully sparking discussion. So let’s get started.

Remember to join the C Of DC you merely have to click the link.

Since we are starting off a bit later than I intended this month because I had a really bad sinus infection I thought I would start this session not with a set of issues to read but just a question I would like to ask you all.

Next week we will begin our exploration of this team with Challengers of the Unknown series that began in 1958 and ran until 1978. Hope to see you there!

I have read stories with the Challengers, but I don’t really remember them, so it will be great to read some of their stories again.

Can I count this as my favorite Challengers story?

Sure can. I liked that one too.

Sorry you weren’t feeling well. I’ve been down with bronchitis, so I feel that.

I actually don’t know much about the challengers of the unknown. The name rings a bell, but I can’t tell you where I’m remembering it from. I’m excited to learn more about them this month.

One of my favorites as a kid, I will look forward to rereading.

So, as is always the case, we will begin our exploration of the Challengers of the Unknown with the earliest available stories to feature them as well as some links and other information on the team.

Reading for This Week

Next week we will take a look at this same series but at a later point in the 1970s.

And now from the other end of the spectrum for the original Challengers series my friends from the @CharactersOfDC Club. Enjoy!

What did you think of these issues compared to the four previous?

I don’t hate this the way I used to… it’s just, I liked Super-Team Family 8-10 so much better as a…shorter person.

And here is our final reading for the month which covers 1997’s Challengers of the Unknown series by Steven Grant with pencils by John Paul Leon and inks by Shawn Martinbrough.

For May: Welcome to Monstrous Justice as the @CharactersOfDC Club explores the characters and world of Justice League: Gods and Monsters prequel comics.

For June: The Freedom Fighters

I enjoyed reading these issues, although they don’t seem to resolve everything. I guess that keeps things unknown. I would not want to be one of them because I like my life to be a lot more sane and ordered.