Welcome to Week 7 of Season 2 of a very special challenge / contest , reading one single issue a week from the currently- digitized DC Universe Infinite collection of Silver and Bronze Age Superman and Family comic over a three month timeframe!

This time around: Bronze Age! 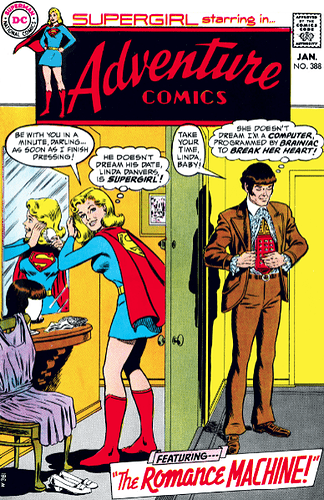 Question 1: Which of these two sizzling Bronze Age Supergirl features were your favorite? Why is that?

Question 2: Which Brainiac version is your favorite villain to have in a story?

And be sure keep an eye out for our once a month first Thursday evening of the month Listen A Longs of the classic 1940’s Superman Radio Show adventures (in the Watchalong aisle). The next one is planned for Thursday December 1st!

Well you sure don’t see this everyday!

This comic came out about three weeks before I was born.

“Kindergarten Criminal” this was the better of the two stories for me. The complex situation between Lex and Lena added a bit to the plot. Kind of a simple way to resolve the “international waters” problem, but it had to be done. I do need a computer to redo all the inking Jack Abel ever did at DC.

Speaking of computers, if Han had Brainiac with him, he wouldn’t need to worry about a wonky Nav Computer. “The Romance Machine” was written by 21 year old Cary Bates and I hope he treated his dates better than Kim did. Interesting that The Beatles were influencing hairstyles on other planets at the time. This should be an interesting finish next issue.

I agree that Kindergarten Criminal was the better story. Lex is stooping very low here trying to corrupt such a young child.

Imagine a Supergirl comic today that would tell two separate stories unrelated to each other in one issue.

I pick up Fantasy and Science Fiction Magazine ever so often, and to this day they publish stories that might be three or four pages long and people in 2022 still enjoy a short story.

Come to think of it, isn’t that kind of a theme in the streaming universe and apps for younger people that everything’s super short attention span geared?

I liked both stories quite a bit and realized it was because the issue was published in early 1970. The Super-Fam stories were still transitioning from their Silver to Bronze Ages at this stage, so a lot of the Silver Age conventions were still lingering around. Basically, these were Silver Age stories with a Bronze flavor which I liked. In my estimation, the full-bore Bronze Age didn’t kick in for the Super-Fam until 1971 with the Sand Superman story that started in Superman #233.

Which of these two sizzling Bronze Age Supergirl features were your favorite? Why is that?

Despite the obvious problematic issues with the way Kim treats Kara and how she responds (it was like watching an episode of that terrible “Pick-Up Artist” TV show), I did enjoy “The Romance Machine” a bit more. That’s because it contained two of my favorite elements from Silver Age Super stories: 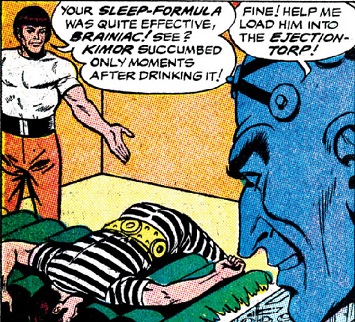 I also enjoyed the “Kindergarten Criminal.” In particular, I like how the story ended with Lex staying true to what passes as his “moral code” regarding Lena and her family. Throughout the Silver Age, Lex kept his distance from Lena and would deny being related to her so she would not be dragged down by his criminal lifestyle. We see that here as Lex denies he’s Val’s uncle in the end.

Which Brainiac version is your favorite villain to have in a story?

The classic, green-skinned, Silver Age Brainiac who loves shrinking everything is my favorite Brainiac with the addendum of I love how his family tree was fleshed out in DCU stories over the years. That’s probably another reason I liked “The Romance Machine.” Classic Brainiac…

I definitely feel like the Lex Luthor we see here in this story is a very very different Lex than the one we see in modern day stories.

The version of Lex that we saw from Mark Russell with the Future State Superman vs. Imperious Lex stories of about 2 years ago remind me very much of this 1970 Lex however.

The version of Lex that we saw from Mark Russell with the Future State Superman vs. Imperious Lex stories of about 2 years ago remind me very much of this 1970 Lex however.

I liked that story a lot! It was kind of/sort of an updated version of “The Showdown Between Luthor and Superman!” from 1963’s Superman #164 (in my opinion, the greatest Luthor story ever told). They usually played Pre-Crisis Lex like a guy who could’ve been really good, but refuses to accept it. He would occasionally do good things like shield Lena and her family, but always played them down like they were still for selfish reasons. Superman #175 from 1965 told an “imaginary story” that illustrated how things could’ve been different. Modern Lex is played more like a straight up sociopath. I mean, Pre-Crisis Lex did exploit the superpowers of a minor for crime in this story, so… yes, he’s still a sociopath. However, you still caught glimpses of an actual person underneath.

I also enjoyed Kindergarten Criminal, as to Kim’s treatment of Kara although by most standards unacceptable, from my recollection, not an uncommon portrayal from that era.