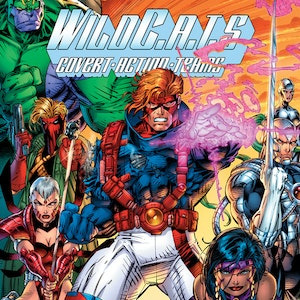 In 1992 and as part of Image Comics, Jim Lee debuted WildStorm, an imprint that featured multiple super heroes, villains and teams.

Chief among those teams were the WildC.A.T.S, a covert, action-based team of super heroes (including some based from the alien Kherubim race) who were dedicated to saving the Earth from the evil Daemonites, led by Helspont, a villain who would go on to face assorted DC Universe mainstays, including Superman, during The New 52.

Hot off of his uncanny success with X-Men, Jim Lee’s work on WildC.A.T.S would pave the way for the interconnected WildStorm Universe, and remain a shining highlight of an important creator-owned imprint that is now celebrating three decades of life, and one that has been part of DC Comics’ history since 1999, when Jim Lee sold WildStorm to DC.

If WildC.A.T.S is brand-new to you as of reading this thread and you’d like to know more, simply check out the digitally available issues (with #13 making its DCUI debut today) from the original series down below: 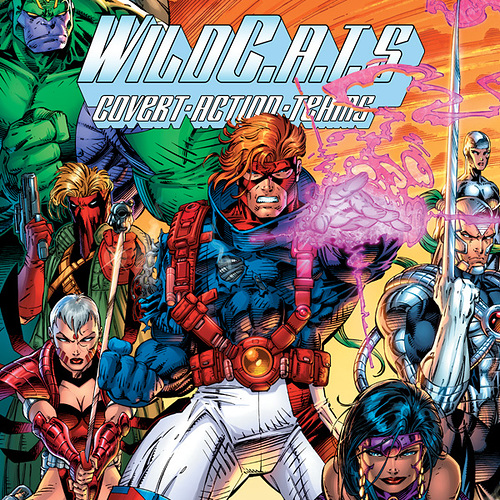 Wildstorm's iconic superhero group is born as the covert action team comes together to stop an alien war.

James Robinson, Alan Moore, Grant Morrison and more legendary writing heavyweights of the comic industry would go on to tell subsequent adventures of the WildC.A.T.S in various ongoing series, mini-series and one-shots (some of which featured the X-Men, as well as the Xenomorphs of the Alien franchise), but its the original, 50 issue volume that began in 1992 under Jim Lee’s pen that made comic fans roar with approval and has gone on to be an enduring sci-fi adventure for 3 decades and counting.

Are you new to the WildStorm Universe and WildC.A.T.S, or are you a seasoned fan that says “Make mine Maul!” with geeky delight? Sound off below, C.A.T.S!

I leave you with this, the opening of the short-lived (13 episodes) WildC.A.T.S TV series, which aired Saturday mornings on CBS from 1994 and into 1995, and whose theme song will engrain itself into your mental sponge/brain:

If you’d like more from the TV series, you can catch all 13 episodes from the Retro Rerun YouTube Channel in this handy playlist:

My only knowledge prior to DC buying Wildstorm from Image was having the second issue with it’s prism cover, the cartoon, and a couple issues of the X-Men crossover. I tried the series when they rebooted the line, but I don’t think it made it past an issue or two. Maybe I’ll try it again one day.

That was pretty spiffy. Its definitely one of Jim Lee’s best covers from the series.

The WildC.A.T.S. TV series is what exposed me to the property.

I had no idea what “WildC.A.T.S” was when I first saw it on CBS, but it looked cool and hooked me from the first episode.

Its just too bad that CBS screwed around with its time slot. I distinctly remember some episodes airing at 6 AM.

Even for a kid who routinely woke-up early for cartoons on Saturday mornings, I thought “That’s way too early!”

Yeah, I could have set my VCR to record those episodes that aired in the wicked-early morning, but there’s just something special about watching cartoons as they air.

No time like the near-future, then! A new WildC.A.T.S ongoing debuts in November, and will see the team take on the Court of Owls! That could very well be a story for the ages, and I can’t wait to dive into it.

DC recently announced a new volume of WildC.A.T.S will debut this November!

Matthew Rosenberg is writing, while Stephen Segovia pencils a tale that (as I mentioned in the last post) sees the 'C.A.T.S rumble with the Court of Owls!

Spinning from the pages of BATMAN comes the senses-shattering new series! The HALO Corporation has gathered a motley crew of operatives, led by Cole “Grifter” Cash, who are going to make the world a better place…no matter who they have to kill! Working in the shadows of the DC Universe, this new covert team has been tasked with gathering an elite group of scientists for the first phase of their plan…but the ‘Cats mysterious leader, Void, might have other plans!

The mission has gone sideways for the ‘Cats team as they inadvertently run afoul of the LAST group they wanted to cross paths with…the Court of Owls! It’s the fight of the year with Talon vs Zealot!

If you’re curious what the hubbub about Jim Lee’s first original creator-owned property that made comic book history in 1992 and is still popular all these decades later is, this November will offer a perfect jumping-on point for you.