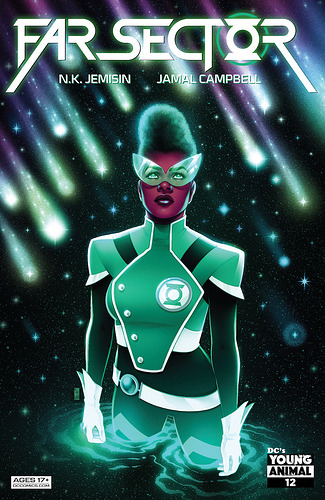 With Far Sector, N.K. Jemisin, Jamal Campbell and Deron Bennett have given us one of the
best LGBTQIA+ heroes we’ve seen—and one of the greatest comics of the modern era.

The mantle of the Green Lantern has been shining a light into the darkness since DC Comics was still known as National. Created by Martin Nodell and introduced in All-American Comics #16 back in July 1940, a railroad engineer named Alan Scott took up the Green Lantern name along with a magic lantern and a superpowered ring to bring justice to Golden Age New York.

Nearly two decades after his debut, editor Julius Schwartz oversaw writer John Broome and
artist Gil Kane in the creation of a different iteration of the hero, Hal Jordan. The story of a test pilot who was given the ring by a dying alien shifted our understanding of the crusader known as the Green Lantern and those who wield the cosmic force of the Power Ring. Since then, many heroes have taken on the mantle including Guy Gardner, John Stewart, Kyle Rayner, Simon Baz and Jessica Cruz. But perhaps none have truly shaken up the status quo of the Green Lantern quite like Hal Jordan.

That is, until Jo Mullein.

To learn more about Jo Mullein and her impact on the Green Lantern, head over to DC Comics!

Have you been following the story of Far Sector and Jo Mullein? Let us know your thoughts in the comments!

Far Sector had a tremendous run and I really hope N.K. Jemisin and Jamal Campbell return to it some time in the future.

Jo was a great lead and I hope other writers and artist do her justice.

I couldn’t agree more- this was one of my favorite series in recent years. ICYMI, this team and title were just nominated for an Eisner Award!

I saw that, it is well deserved, though a part of me wishes Jemisin and Campbell had gotten some individual nominations for their work on Far Sector. Campbell did get a best cover artist nom at least.