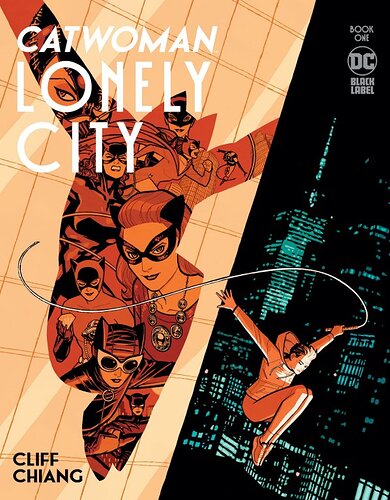 Ten years ago, the massacre known as Fools’ Night claimed the lives of Batman, The Joker, Nightwing, and Commissioner Gordon…and sent Selina Kyle, the Catwoman, to prison. A decade later, Gotham has grown up—it’s put away costumed heroism and villainy as childish things. The new Gotham is cleaner, safer…and a lot less free, under the watchful eye of Mayor Harvey Dent and his Batcops. It’s into this new city that Selina Kyle returns, a changed woman…with her mind on that one last big score: the secrets hidden inside the Batcave! She doesn’t need the money—she just needs to know…who is “Orpheus?” 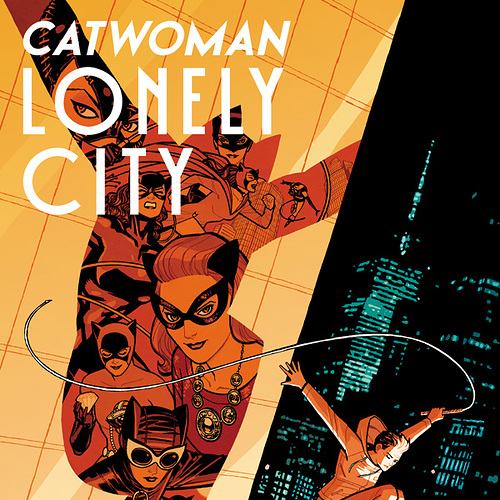 If Selina Kyle is going to break into the Batcave at her advanced age, she’s going to need a crew to help…and luckily for her, some of Gotham’s craftiest... 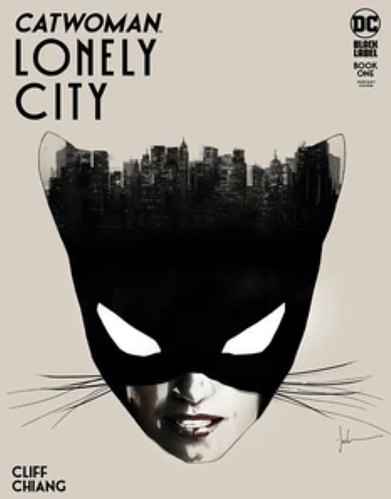 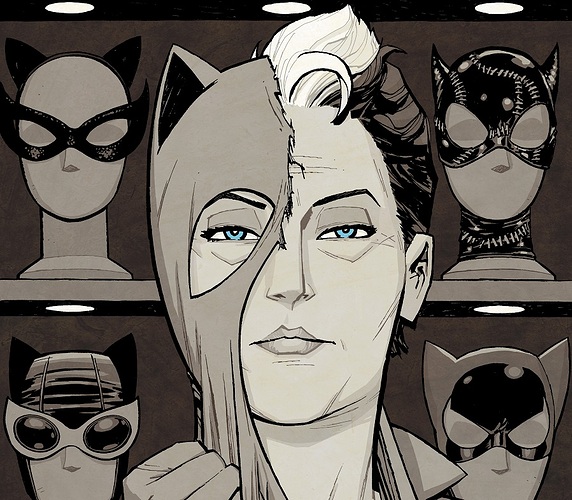 Catwoman Finds a New Future in a Lonely City

I’ll be back w/ more on the book, but I’m really liking it so far.

This was a really interesting story, with of course amazing art. I have to admit that I am a bit “alternate futured” out, given Future State, Bat/Cat, Batman The Detective, and now this - all of them are alternate futures, none of them connect to each other, and all touch on (what seem to me to be) very similar themes without a whole lot of differentiation, leaving the differences to mostly be whether I really like the writing and art or not.

I really enjoyed the first issue – I thought Chaing did a great job of creating this alternate world and made each character feel compelling. I’m definitely curious to see what happened and what Selina will do.

@millernumber1 – It’s funny you mention the glut of “alternate future” stuff, and while I can see where that could be a thing, for me I was actually reminded the most of Dark Knight Returns, mostly with the whole “older ‘hero’ comes out of retirement and has to deal with the fact they’re not in their prime anymore” thing.

That is a very good point, though I’d say to some extent Bat/Cat deals with that, too. What this mostly reminded me of is the Brubaker/Rucka era, actually, when Chiang did art for some backups, at least. The writing isn’t terribly Milleresque, with the over the top noir voiceover.

enjoyed part one, and two really looking forward to part 3. really this is the first time we see a future Catwoman story that explores Selina with Bruce dead, and revealed to be Batman, which to my limited knowledge is a direction that’s new. Yes Catwoman future state does have this element to it, but this is the first time its not a dystopian future. it also has Selina somewhat wondering what might have been when she meets Babs kid.
(I am moving the parts of book two to the book two discussion page.)
this is honestly a captivating story so far.

Hey @Nobody.bladesmith! Thanks for coming by! I’m glad you’re enjoying it. I am too! I was just about to read Book 2!

So I haven’t looked at the rest of your comment. After.

There’s a discussion for it here

if you want to swing by!

That’s why I blurred it. I will move it to book two’s discussion page a place to discuss book two. =)

I have to admit that I am a bit “alternate futured” out, given Future State,

actually Future state is interesting in its was set up to appear as a possible future but now future state Gotham is a elseword.

I’m not saying any of these alternate futures are bad - I’m just saying it feels like there’s too many of them.

I can agree with that…and with the newest reboot of batman beyond we are getting another one =). 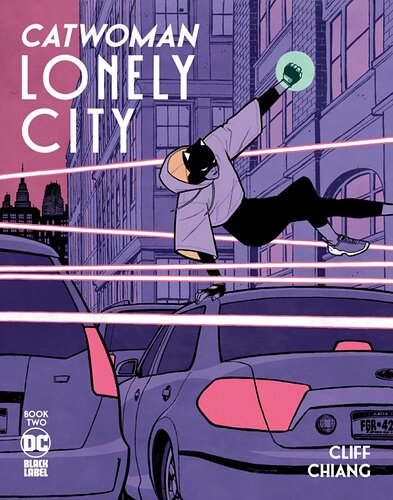 If Selina Kyle is going to break into the Batcave at her advanced age, she’s going to need a crew to help…and luckily for her, some of Gotham’s craftiest former villains have time on their hands and bills to pay. But who is the mysterious OGBeast? And with political pressure mounting, how long will Mayor Harvey Dent let this cat stay out of the big house? 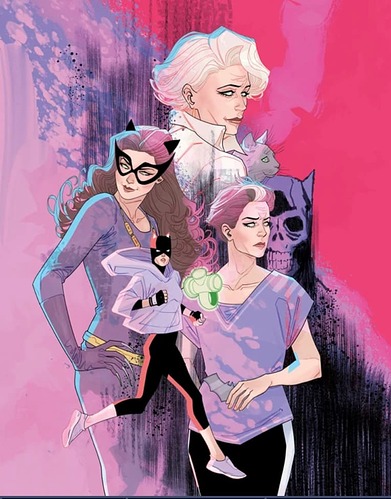 issue two is interesting because we have a definitive timeline for the first time in one of these future stories. I also love the superhero merch warn and hope DC copies the designs and sells them in the official shop. (DC please take my money and let me buy some of this merchandise.) Catwoman’s new cowl seems to reference both B: TAS’s half reboot black suit…and batman’s own cowl.

This also builds on Selina’s what might have been moments with the introduction of the riddler’s daughter. Eddy is revealed to have been an addict to stimulants (not really all that new) and is now clean and sober for 12 years…but also is a widow and the loss of his wife is what caused him to stop being the riddler.

I like that Selina first meets bruce well in the Catsuit from Batman 66 in their first meeting. However, we also get references to the brighter silver age.

OGBeast is interesting and not what you would think, it’s where the supervillains of Gotham got all of their toys. =).

…poor Poison ivy…she lost her Harley and took it hard…I love what she does to make money…Tim Drake would be her best customer.

Okay, I’m back to finally add my 2 cents!
This was a great Issue—a LOT happens, the pace was fast, and I was very happy to see a certain plant lady.

But wasn’t happy to see Harls didn’t make it, like so many others. Can’t wait to see where it all goes, though whe they get back to Gotham. Definitely an interesting team, lol!

I was thinking that too—hope I’m wrong, but we’ll see. Perhaps the new mayor would find some kind of job for her?? [Catwoman-39-2] In a universe made of superheroes and super-criminals, you would think crime stories would be pretty common within the DC Universe. And yet, they’re not. At least not in the traditional sense. Gotham City may run rampant with gangs and crime families, but we usually only see them as they’re being painfully brought down by the city’s heroes. We rarely get to know them as anything more than easy targets for the Bat-Family. All that’s about to change with Catwoman #39, the firs…

I was sad Harley did not make it eather.

was thinking that too—hope I’m wrong, but we’ll see. Perhaps the new mayor would find some kind of job for her??

Really for me, it Depends on what Orpheus is. Could be bat and cat clones (as the bat and the cat are forever). As i recall in Futures End (I have not read much of it) and Last Knight on Earth (This I have read) Batman had cloning tech. However, it could be something that destroys batman’s tech or It could be both.
personally, I like the idea of the bat and the cat having a second chance at a happy life together. perhaps working at Cranston, Grayson, and Wayne.

Issue Three to be released April 19 on kindle.

I have a draft all ready to drop that day—hope to see you there @Nobody.bladesmith. 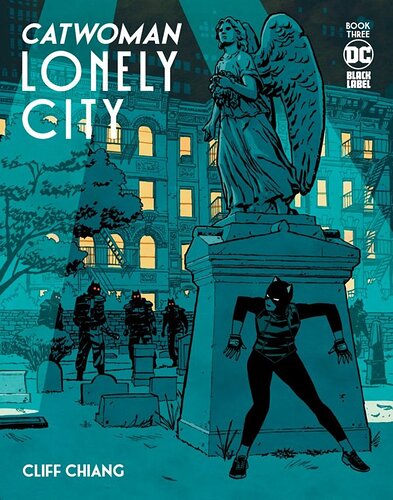 Catwoman had assembled the crew of a lifetime for her heist of the Batcave, and everything was going to plan—until it wasn’t. When tragedy and disaster strike, she’s got to find a way to land on her feet…but as her need for answers grows stronger and more desperate, she might be prepared to make a deal with the Devil himself…