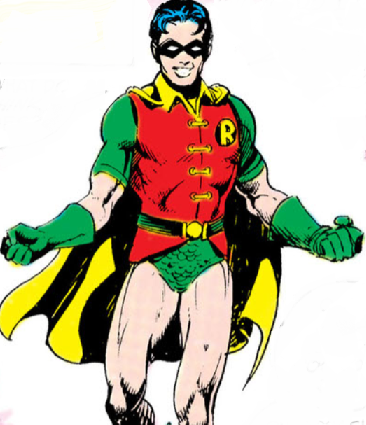 The suit makes the boy…

The Renegade Robins Club is officially the Robin II Club now that Jay has taken the moniker! (Don’t worry, Hoodies: he won’t stay that way forever.) But what happens when Dick’s old rivals come seeking revenge against the Boy Wonder? Crazy Quilt targets the wrong Robin! And he’s not the only quirky recurring villain this time around. Expect an appearance by none other than Catman! Finally, get ready for a new villain to enter the ring: Doctor Fang!

Click this drop-down menu to see what excitement is going on elsewhere:

Do I spot a Jason cameo?

Need to understand what’s going on in the issues we’re reading? Maybe I can help: 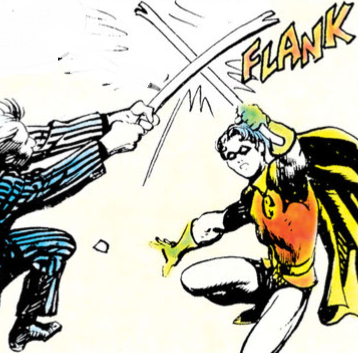 What is it with you and crowbars, Jay? 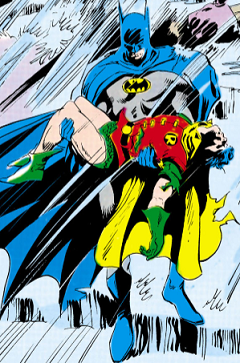 Oh, no! Not already!

It’s funny, between this club and the reading I did for Crisis, I’ve come to have a better appreciation for this period in Batman history. I wasn’t thinking and actually read the Deadshot issues not realizing that they’re not part of the reading!

I wasn’t thinking and actually read the Deadshot issues not realizing that they’re not part of the reading!

With this session, we have reached the first anniversary of Jay’s introduction. What is your overall impression of Jason Todd: Year One? How do you feel about his first solo mission?

I enjoyed the first year even though at the time I thought Jason was a bit to much like Dick. I still feel that DC didn’t do the character any favors by making him almost exactly like Dick but that’s just my opinion.

As for his first solo mission I loved how determined he was, going so far as to physically chase down the car when all other options were extinguished. He really did all the grunt work on this one and I was, like Jason, annoyed when Bullock blew the whistle on it instead.

Jay faces the fallout of being a legacy character. Which other enemies of the original Boy Wonder would you want to see Jason face? (Don’t say the Hudson U hippies!)

Two of Batman’s more colorful rogues return to bring cataclysm. Were you familiar with their previous stories, or are you just now being catechized in this category? Am I guilty of catachresis with these puns?

I’ve run into them before back when I originally read these.

The Doctor Fang issues and the Green Arrow backups express concerns over social issues such as race and poverty. How do you feel about the way these stories handled the topics?

I find it sad that we are still struggling with the same issues even now. Despite these stories having been written decades ago they still are talking about very relevant topics in today’s society. I liked how it was handled in the Green Arrow backups better though probably because there was a lack of racist language there. I really can’t stand that kind of language. I don’t use it myself and people that do tend to get an earful from my IRL. That said I did like that Tommy Dunfey was able to see that Michael Greene was a person just like anyone else and that he took the time to seek not only his killer and make sure he would do the time for his crime but that he attended the funeral and returned the championship belt to Greene’s family.

I like Julia and always have. I had forgotten how much her situation and Jason’s paralleled each other. I found it interesting that their two situations have so much in common.

With this session, we have reached the first anniversary of Jay’s introduction. What is your overall impression of Jason Todd: Year One? How do you feel about his first solo mission?

Overall I like how they slowly introduced and made him earn the title of Robin. At this point he still feels a little like “Dick-lite” at times, but he’s still a good character to read. As for his first solo mission, I liked the youthful energy he brought to his tracking down of Dr. Fang (as awful a villain he was), while still feeling like a credible if green crime fighter.

Jay faces the fallout of being a legacy character. Which other enemies of the original Boy Wonder would you want to see Jason face? (Don’t say the Hudson U hippies!)

But those Hudson U Hippies are just so damn punchable!

Seriously though, as @JasonTodd428 said, Deathstroke comes to mind, though I think that’s mostly because at this point, there isn’t that much in terms of villains that specifically have a grudge on Dick. It’s probably for the best because, while I like Jason and think he’s a credible crime fighter…Slade would wipe the floor with Jason at the point of these issues.

Two of Batman’s more colorful rogues return to bring cataclysm. Were you familiar with their previous stories, or are you just now being catechized in this category? Am I guilty of catachresis with these puns?

I’ll let you know – as soon as I look up those words!

I’ll go with “yes,” but no more so than Catman himself did with these issues!

Seriously, Crazy Quilt I was of course familiar with from infamy, and then I had seen him in an episode or two of Batman: Brave & The Bold (which also dealt with his grudge with Robin) and then Scott Snyder’s reimagining of him during Endgame. First time reading him in this classic era, and I can dig it – sure his MO is goofy as hell, but his pathos and reason for villainy and revenge is pretty solid, and really, the best villains in comics are those that tight-rope balance between threatening and goofy like trapeeze artists.

Catman I’m also more familar with in modern takes, such as Brian Meltzer’s arc of Green Arrow with “The Archer’s Quest” and most notably in Gail Simone’s run of Secret Six. Needless to say, I prefer Simone’s take on the character way, way, way, way more.

The Doctor Fang issues and the Green Arrow backups express concerns over social issues such as race and poverty. How do you feel about the way these stories handled the topics?

The boxing two-parter read a little weird to me at first. It felt like it was muddling itself up in order to make an obvious point at parts, such as when the white boxer is talking to his black trainer. It definitely read a lot better and more concise in the second part – maybe because the artist wasn’t involved in the writing process? It was really shocking to see the N-word dropped in a mainstream superhero comic during this time – though X-Men: God Loves, Man Kills did it two years prior.

I like her well enough in these issues so far, though there isn’t a lot to her right now. Or maybe I’m just more partial to the version of her in the New 52 and in Batwoman Rebirth, where she’s more immediately part of the action and has a stronger badass side to her.

What is your overall impression of Jason Todd: Year One? How do you feel about his first solo mission?

I’m all for Robin solo missions, but this really isn’t our Jason Todd yet. He’s a suitable fill in and I like reading about a Robin who is so green, but he’s not as interesting until his post-crisis origin kicks off.

Which other enemies of the original Boy Wonder would you want to see Jason face?

I’m sorry, but which other’s are there? Raptor?[quote=“AlexanderKnox, post:1, topic:366949”]
Were you familiar with their previous stories, or are you just now being catechized in this category? Am I guilty of catachresis with these puns?
[/quote]

While I’ve heard of the character, this is the only story I’ve read with Crazy Quilt in it. It was weird seeing a guy called Crazy Quilt being taken seriously. I’ve owned a few quilts and I can unequivocally say not a one was this vicious. I

Catman, of course, becomes something far better once Gail Simone gets a hold of him.

How do you feel about the way these stories handled the topics?

I didn’t have any issues regarding how the topics were being dealt with. You expect Green Arrow to go there. The second Dr Fang story was just so different than the last, it was a hard at first to reconcile that it was the same character.

Julia is okay, fairly generic really. It’s weird that she’s suddenly jealous of Vicki Vale - it’s like because she’s a guest in his house she thinks she & Bruce should have a thing, but we haven’t seen much interaction between the two other than, “Sorry, Julia, I have to leave right now.”

I’m sorry, but which others are there?

Jason Todd’s actually my favorite Robin. His death was the most tragic out of all of the Robins. I kinda relate since I also get angry like him.

Jason Todd is my only character favorite in DC and my favorite in all comics is a pity that DC does not know how to get its potential, in most cases they give the worst stories and the worst cartoonists and also cancel their series. Currently canceling my DC purchases, I’m buying from Marvel and decided to buy Disney stream instead of HBO.

I agree with you there. They just acted like he’s just a random person is star of using his potential. Even the story where he got killed off wasn’t good in my opinion.