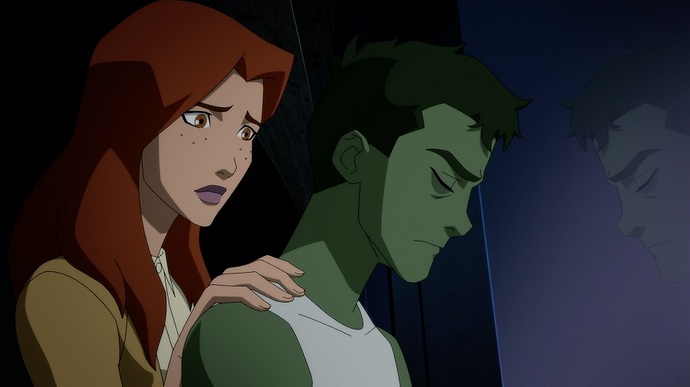 Beast Boy is in danger. He hasn’t been captured by a super-villain, but he’s been held captive by something far deadlier—his own depression. Young Justice: Phantoms is back with a new batch of episodes dropping today on HBO Max, and if you’ve been keeping up, then you know that things haven’t been going so well for Garfield Logan. Everything comes to a head in the episode “Emergency Dive” as Gar’s closest friends try to stage an intervention.

Let’s go over how we got to this point. At first glance, it might seem like Garfield Logan is living the life millions of people dream of. He’s a superhero with the power to change into animals, he’s leading a team known as the Outsiders, he’s the star of his own science fiction show, and he’s dating a princess. Of course, all these things have come with a price. Gar has experienced more loss in a few years than most people face in a lifetime.

To take a dive through Beast Boy’s history, head over to DC Comics!

Have you been keeping up with Young Justice? Let us know your thoughts in the comments!

Gar has been so rough to watch all season, and that intervention was the roughest of all. Every time I thought 1 of his friends’ impassioned pleas would finally get through to him, it just broke my heart to see him dismiss every last one of them. The fact that M’Gann essentially had to give him an ultimatum by bringing up the annual mental health checkup – get help or give up being a hero – shows how close things are to the point of no return for him. I’m genuinely worried about him, but I’m trying to hold out hope that he’ll be able to make it out of this alright. At any rate, this is a painfully effective cautionary tale about how much depression can take a toll on someone and how crucial it is to seek help in times like these

This is probably the deepest and most tragic take on Beast Boy I’ve seen and it’s impressive. And what’s stunning is that we have seen a good chunk of what has happened with him or seen the people he’s lost, like Conner, his mom and such, but there’s so much that we haven’t seen or was inferred, like Jason and the Doom Patrol. Gar’s been through some CRAP in this universe.

I really hope he does come back from this – and I think if he does, it’s going to be to try and recover Conner from this phantom dimension he’s in with Phantom Girl.

Also, I have to say that the fact that the Garfield in Young Justice is voiced by the same guy who played Beast Boy in Teen Titans still stuns me at times. Like, if I’m perfectly honest, Beast Boy kind of annoyed me more often than not on the TT animated series, so hearing that same voice doing this amazing and authentic portrayal of a downward spiral of depression is kind of weird but also amazing.

Also also, seeing this arc with Beast Boy, I can’t help but be a little salty and think “This is what Heroes in Crisis should have been.”

Have you been keeping up with Young Justice? Let us know your thoughts in the comments!

As you command-no, and I am not able to deal with depressing super heroes right now.

As much as it hurts to watch Gar’s spiral down into Depression I think it is an amazing portrayal and a necessary one. We rarely see this type of discussion in superhero shows or in animation.

The intervention scene hurt. A lot. But it was authentic. People who are hurting that bad lash out. They don’t want help. They just want to be left alone. And it is so important that DC is showing all of this. So many shows and comics just gloss over the grief and the PTSD and the mental illness side of things. It is really great to see Young Justice focusing on it.

Also also, seeing this arc with Beast Boy, I can’t help but be a little salty and think “This is what Heroes in Crisis should have been.”

As someone who actually liked Heroes in Crisis, I really do agree with this. This focus on not just the trauma but the hurt afterwards is what HiC missed. (among other things) But with Black Canary doing her thing in this universe it would be great to see a Sanctuary style place for heroes with PTSD, depression, trauma, etc. With Dinah in charge it would be a much safer place than the comic…

But to answer the question in this thread, yes I do believe that Beast Boy can be saved. But I don’t think he will come out the other side the same as he was prior to this season. The fact that Connor is actually alive does help this, but a depression this deep and with everything Gar has been through, it would be a disservice to the authentic portrayal of Depression so far, for him to come out the other side mostly un-scathed.

I just hope that his talk with Black Canary gets him to a point to seek the help that he really needs.

As someone who actually liked Heroes in Crisis, I really do agree with this.

Oh yeah, to be clear I don’t hate it either, there are aspects of it that I think are solid, but on the whole it’s kinda messy in execution.

I’ve always preferred the younger version of Gar from the first two seasons. I loved the design but also his enthusiasm. Teenage Gar…yea, no. Last season really soured him for him. The social media thing did not work. And this season the depression thing has been going on for way too long. I see what they’re trying to do and I hope he can come out of this downward spiral he’s in.

He was acting like a prick during the intervention. The look M’Gann shot him when he said “next”, yea, that’s the look of a family member who is both disappointed and angry with you. It definitely got a reaction out of me, which I guess is the mark of good writing.

I hope Gar gets the help he needs because the other way this story could go would be very dark and quite the gut-punch. I’m rooting for him to become more like the first two seasons Gar and less like the last two seasons, cause it’s been ROUGH.