Can Someone PLEASE tell me who this is?

This is probably going to be a thread. I have read so many comics on here, I like to take small screenshots, akin to quoting a book. But sometimes I crop too much. Sometimes a character is new. Sometimes I have no idea what’s going on. So… can someone please explain to me the following pictures? !
First, who said this?
who%20said%20this%3F|602x336

Okay and who knows a mech suit piloted by a ghost guy because I cannot find that picture but I know it’s out there. It’s a iron-man esque suit but instead of a pilot it’s a ghost

Don’t know about the ghost one, but the speech bubble looks like Christopher Priest’s take on the Ray.

You beat me to it!

Oh yeah! Now that I think about it, that makes a lot of sense. Sorry you didn’t have anything on the ghost pilot. I think I got it from a JSA crossover book and I was stuck on JSA characters.

Or “Jim Owsley.” I have no idea why he used to not use his real name, but DC Database is quite confident they’re the same person.

Thanks for answering my question guys! Any news on the ghost pilot? I think he used to be a hal-jordan kinda deal and then he died but not died-died

His name is Warmaker! Does anyone have more information on him? 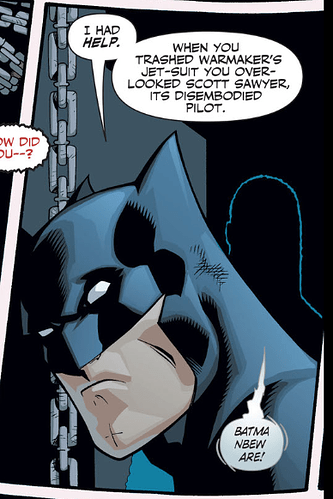 okay I looked him up and I found him. Member of the Ultramarine corps

Actually, Jim Owsley is his birth name. Christopher Priest came later.
He probably changed it in part because he burned a lot of bridges at Marvel in the 80s as Owsley

That reasoning seems unlikely. He left Marvel in the late 80’s and changed his name to Priest is the early 90’s. There was something like 7 years between the events and he never his who he was, not was he ever out of work.

He’s an ordained Baptist minister (or, at least, used to be) so I sort of assumed it was a religious thing, but I don’t think he’s ever said.

Also, working for Marvel was rumored to be toxic during that time period, so not sure if was him burning bridges. But maybe? I don’t know.

“Priest” is the nom de plume.

Actually, the infamous quote is that if his wife ever left him he’d change his name to Priest.

I know, but I think that was sarcasm.