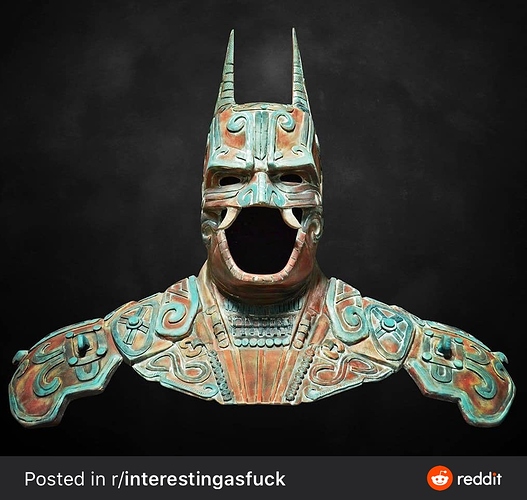 Someone shared this on Reddit and I thought it was awesome so sharing here.

In 2014 Warner Bro’s summoned 30 artists to reinterpret Batman on the occasion of its 75th anniversary. Mexican artist, Kimbal, decided to get inspiration from the Mayan vampire bat god, Camazotz.

Cool! I remember reading about it a while ago, but I never saw the image you posted.

That would be an awesome™️ Batman in the multiverse.

I came across that image as well, Since the path that led me to discover it is super-hero related, I thought it might be interesting to share.

Reading comics for me triggered something in my brain when I was a kid. Looking at the patterns and tropes of shared superhero universes, I couldn’t help but imagine how to add to them within the same traditions. I can’t stop making up superheroes. As a kid, that translated into me making up my own comics, as many of you have done. I still have some of those around.

As I got older and discovered other nerd hobbies like role-playing games, I leaped headfirst into superhero ones like Champions and the old Mayfair Games DC RPG. Those served as an outlet for my brain to spew out loads of ideas onto character sheets and into the games I played in and ran.

Later still, the age of the massive multi-player online video games began. I was a player of City of Heroes from its earliest days and I became a lifetime subscriber to Champions Online. Both of those games allow for a wide variety of powers and even more freedom in costume creation. Between the accounts I have in those two games, I am certain I have no less than 100 different characters. I continue to create and vent my ideas there.

Within the Champions Online costume creator, there are different appearances for the claws, for characters who utilize that particular power set. One of them was a bone claw that looked particularly vicious.

I liked it enough to wonder what character might use such a thing. Clicking on options here and there, one thing led to another and before long I had a character that looked like this… 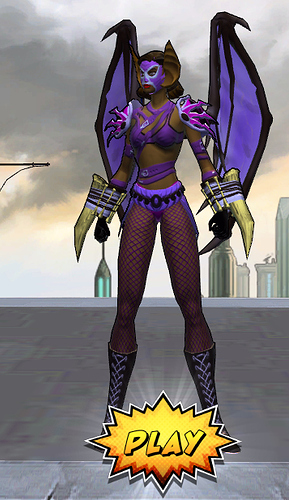 I loved the look, but had no idea what to call her. While I am happy to nod to inspirations, I usually shy away from direct tribute characters, so I wasn’t going to call her Bat-Girl or Bat-Woman. I wondered if I needed to have the word “Bat” in the name or not. What other words would work? Then I remembered the Latin name for bats was chiroptera. Since I love alliteration, I wondered if I could attach it to a word with either “ch” in it or the hard “k” sound, since that is how the beginning of that word is pronounced. I eventually stumbled across the word chica, and loved the way it sounded in front of the word chiroptera - Chica Chiroptera (six syllables is more than the average for superheroes, but I personally love the long names like that). Even better, since I had already selected a darker skin color when I made the costume (it just looked good like that), I could then imagine the character as being Latina in origin, which the informal Spanish word chica suggests.

Now here is where I start to connect with the opening post. Since I had now decided my character was a Latina, I wondered if there could be some link to bats and the great cultures of South and Central America. An internet search quickly led me to Camazotz, a Mesoamerican deity I had never before heard of. I skimmed websites and pictures - even coming across the one in the opening post. I have worked out a rough origin for the character, which involves her and her basketball team on an international tour, encountering an avatar of Camazotz, which left her empowered. I cast her as a basketball player as another callback to Aztec culture, imagining modern day basketball as an analogue for the similar ballgames played in the glory days of the Aztec civilization.

That was the connection I had with Camazotz prior to this thread. 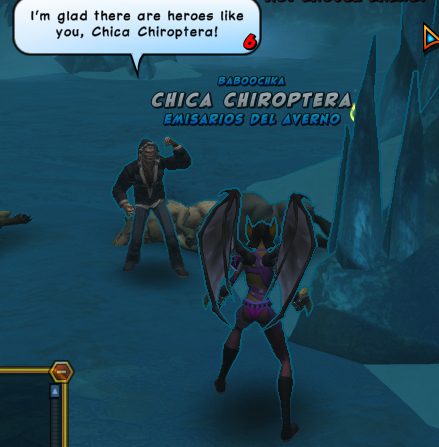 That is a really cool design! Even with all the alternate versions of Batman there have been, I think I’d like seeing this one more just because of the appearance.

I found a link to Kimbal’s own art page. There aren’t other superhero designs, but his work is nonetheless very pleasant to look at.

What was funny about this one, was how bloggers got this confused with the source material. It was a thing to behold

Thanks for sharing your previous connection with Camazotz and the link to Kimbal’s artwork!

Someone here might want to take a quick read through Elseworld’s Finest’s two issues. The art is simpler, but one of the two costumes on the cover should ring a bell in this context…

Archaeologists of the future will be so confused when they dig this up.