In the past few days I’ve started watching the classic 1963 The Fugitive TV Series, I just finish the first season and will continue watching til the final episode.
In the meantime, if you’re a fan of The Fugitive of either the show or movie, then this thread is for you. We’ll be looking at Bruce Wayne: The Fugitive, storyline. 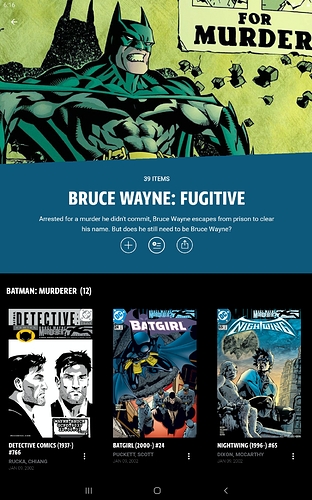 Like Richard Kimble, Bruce Wayne is wanted for a crime he didn’t commit.
Each week we’ll be looking at 3 different books in its continuing series, there’s 39 issues, I’m hoping to make this last from now til September 12. Hopefully no issues are missing.
And here we go…

Week 1: The Beginning
Here’s the first 3 books for the week, and please no spoiler. 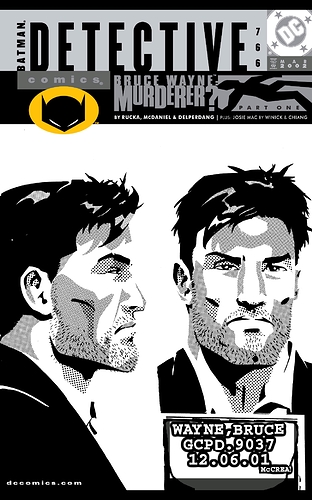 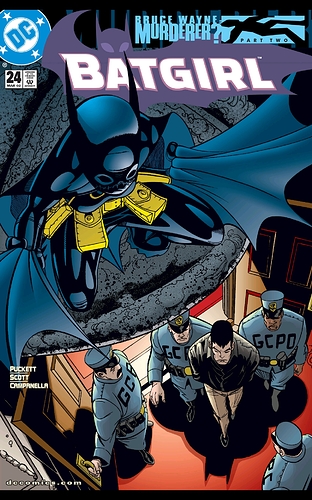 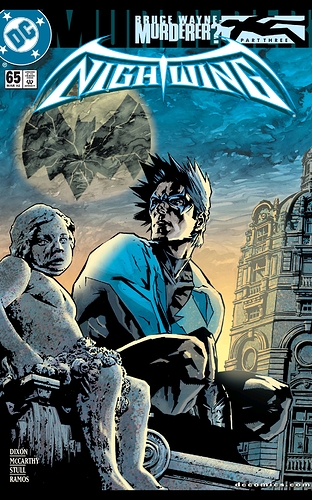 I think this will be a fun mystery, who murder the lady in Wayne Manor? Will Bruce Wayne will ever clear his name?

This is not connected to any clubs, this is all just for fun. Happy reading. Feel free to share your thoughts on this week issues.

I finish reading Detective Comics #766, what’s interesting is that the opening of the story was almost like the opening of The Fugitive movie. I was suprise to seeMaggie Sawyer as part of the opening story since she’s from Metropolis. I think what suprise me most was that Bruce Wayne had a Bodyguard, the Bodyguard, Sasha is a very interesting character.
Reading this issue was like a mix of CSI and Law & Order. Looking forward to read the next issue.

I’ve avoided reading most Batman solo comics (outside the basics, of course) simply for my own sanity, but these look really interesting! I’ll give them a read this week, maybe you just convinced me to take a deeper dive into Bruce Wayne

Welcome to DC Universe Infinite @dykevader! Thankyou for your comment.

I’ve just finish reading Batgirl #24, it was a good continuation in Batgirl’s point of view as she look at the scene of the crime.
Kind of made me wonder if Oracle was listening to the 9-1-1 live as it happen or was it recorded?

Next will be Nightwing.

I finish reading Nightwing #65. There seem like quite a few stories are going on, there’s a prison guard who’s eating a soup who’s grown like The Incredible Hulk.
Dick Grayson bribe his way to see Bruce.
As of right now Dick & Barbara seem to be the only 2 who knows Bruce is innocent.
We’ll be continuing this next week. I was shock when Dick said, that he killed The Joker! When did that happen?
This has been a great start, see you next week with another 3 book reading of Bruce Wayne: Fugitive.

This is one of my favorite Batman stories of the era, and I’ve been looking forward to your read of it since you asked me about the existence of a DC Fugitive story all the way back in 2018. Sasha Bordeaux, Bruce’s bodyguard, is a favorite character of mine. Excited for your continued commentary!

Week 2: The Aftermath
We are now in week 2, Bruce Wayne and his bodyguard are in jail, and everybody is just finding out about the shocking murder of Vesper Fairchild.
Here’s the 3 books we’ll be reading this week… 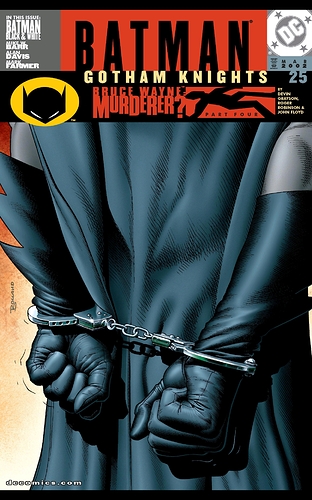 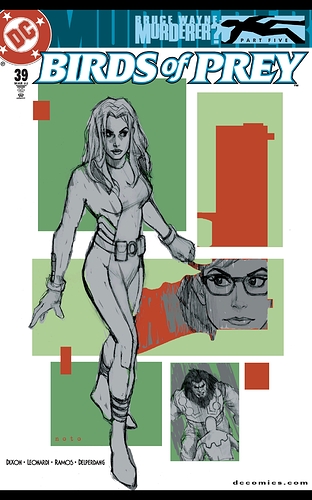 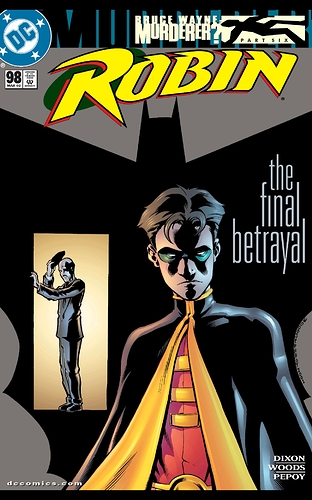 If you’re reading along, please feel free to leave a comment on the book you read.

Today I’ve read Batman: Gotham Night #25,
The Pre-trial has begun for Bruce Wayne. We finally get to see Alfred who return home. I’m not sure where he went.
I notice that Bruce doesn’t talk very much, and most likely show no emotion, that could really hurt his case.

Look like Barbara wants to be Bruce’s lawyer, so this should be interesting.

Next will be The Birds Of Prey.

The dude in the prison was Amygdala, who was on his meds and sort-of reformed at the time.

Alfred had been serving as Tim’s valet at Brentwood Academy for about a year before BW: M/F began.

Well I finish reading Birds Of Prey #39. So far it’s a good continuing story. Oracle is training Ted Kord and have him see the doctor.
The important clue to this story was, who own the gun?
Barbara was shock to learn that it belong to Bruce Wayne.
Meanwhile Black Canary learn a bit more about the victim.
This is a well written and important part of the storyline, looking forward to reading Robin, next.

Also thankyou so much for your comments @Locothedog123, that really help.

I finally read Robin #98, Tim is understandably unhappy with Bruce, so it’s nice to see his point of view since the start of this storyline.
I’m starting to become a fan of Spoiler who really wants to be in The Batfamily. Something tells me that we haven’t seen the last of her and Batgirl, being together.

Also Tim’s Friend Kip is kidnapped!
Will he be ok?
Well that’s it for this week, I’ll be back next week as the investigation continues and hopefully the trial of Bruce Wayne will start.

Week 3: From Bad To Worst

We are now in our 3rd week of reading Bruce Wayne: Fugitive. Here’s the 3 books we’ll be reading this week… 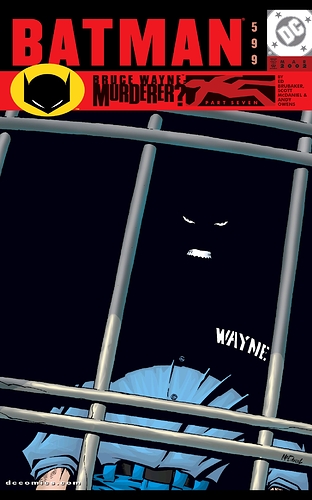 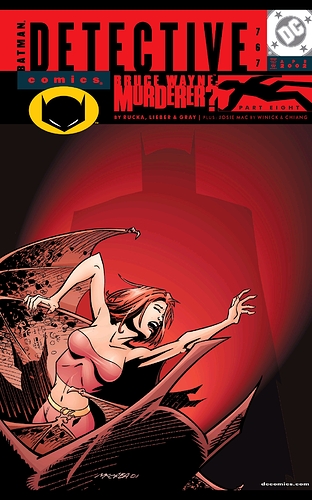 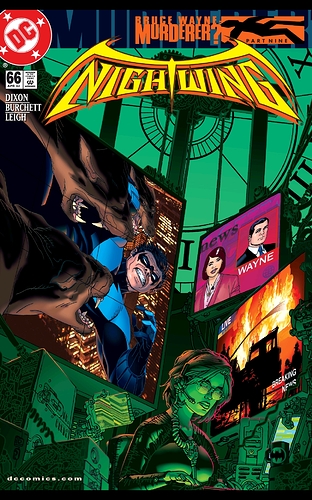 Feel free to leave a comment, of what you think of the story so far.

Today I’ve read Batman #599, we finally get to see how’s Bruce is doing. You can tell how hard he’s trying not to be Batman even if he wanted to. The other prisoners are not making it any easier for him.
Sad that the police and everyone are jumping to the conclusions so fast thinking Bruce Wayne is a murderer because of his Parent’s death.
Will Bruce’s Bodyguard Sasha throw Bruce under the bus by betraying him? We’ll have to wait and see in Detective Comics #767.

Today I’ve read Detective Comics #767, In today story, we see how much Sasha is struggling in Blackgate prison, Like with Bruce, I feel bad for her, the way she’s being treated by prisoners.
I have to admit I don’t know much about her that got my interest. When did she became Bruce Bodyguard, when did she find out he’s Batman? Wonder what become of her after the Fugitive storyline?
Love the art of her dream where Batman comfort her.

Sasha became Bruce’s bodyguard earlier in Greg Rucka’s run. She discovered his identity soon after. I won’t spoil where her story goes, but it was one of the more compelling emotional through-lines of the M/F saga.

Wonder what become of her after the Fugitive storyline?

No spoilers, but ask me again after you’re done.