I just saw the first trailer for it and have to agree with a lot of people in that it’s literally “What if Superman was a horror story”. I’m just wondering how exactly Sony can do that. It looks like it follows Supe’s origin just a little too close for my liking. I mean, you’ve got the alien baby adopted by a farmer couple that couldn’t have one of their own, the symbol that looks a bit too Kryptonian (though that could just be because Kryptonian doesn’t look all that special), Heat Vision, Flight, and Super Speed. They even named the kid Brandon, which I can’t help but feel is a nod to Roth. All they’re missing was the name of the boy’s homeplanet and a chunk of said planet weakening him (or if this is more of an Ultraman situation, since the kid was only shown using powers at night, powering him up).

It’s way too much like Superman/Ultraman. DC/WB needs a royalty check for that one.

I usually don’t mind ripoffs or inspired by films but this is ridiculous!

If it makes bank and is received well, watch it land Gunn a gig as the director of the next Superman movie (in conjunction with whatever he ends up doing on Suicide Squad).

I can already imagine snobby critics having review headlines as the best or worst superman film.

If this film is successful, James Gunn would get extra credit and people will be wanting him to be invovled with the next superman film and see him as some savior for Supes and DC films. If it’s a failure, WB may think that even a ripoff can’t be a good superman related or inspired film

I love James Gunn and I for one am excited for it. I think it will be cool.

Complete MoS rip off right down to the score and lettering. Gunn is a hack sicko.

Now I’m kind of curious to see this, Superman fan and all.

I like superman. I’m just not so loyal that I can’t stand to see him in any other light other than boy scout. Besides WB isn’t doing anything with him. Why shouldn’t Sony? It’s carma. Treat you fans poorly and somthing like this might happen.

@Dr. Doom I mean…going by Sony’s track record with Spider-Man and Ghostbusters I wouldn’t trust them with yet another IP

This first 3 scenes of the trailer is literally ripped from MoS.

@dglasco, you can put Men In Black in that pile o’ IPs also.

Well, Jerry Siegel and Joe Shusters first version of the character was a bit more of a horror story. 1933. 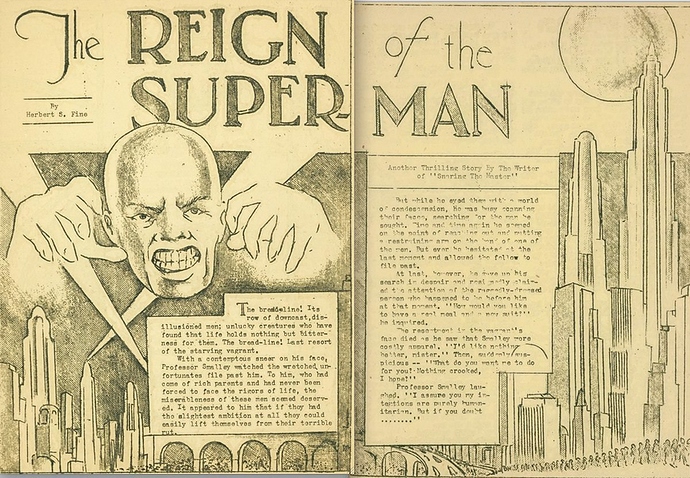 @dglasco7 that is a very good point. Still I love dark hero movies. And I can’t think of a single super hero horror film except maybe spawn. And that wasn’t really a horror film. Still I’d still like to see it. The ultimate what if Batman was right about him.

@zombedy that is so cool I have never heard of that before. Interesting.

Spawn was a “horror”-ible movie if that counts.

The upcoming Spawn reboot is going to be a horror story

Wait they are making a spawn movie? cool

Is it just me or did I hear some Man of Steel music in the trailer?