Seems to be what he’s hinting at on his Instagram… 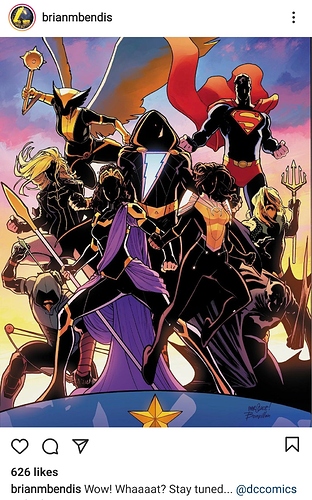 Not super surprising, but still super cool! I personally think Naomi would be a better fit on the Teen Titans than the Justice League, but I’m still super happy to be seeing more of her.

Looks like a new costume for Wonder Woman as well.

Assuming this is a tease for a Bendis-run of Justice League, the positioning and focus of characters in this image is incredibly interesting. Superman and Batman (the typical stars of the league) are placed towards the back and side. While Shazam!, Wonder Woman, and Vixen (I think, though admittedly I’m not really sure) are up front and center. This could mean these characters are going to be taking the lead in this series which could be very cool. I’d like to see the dynamics of leadership in the league played with a bit.

Vixen (I think, though admittedly I’m not really sure) 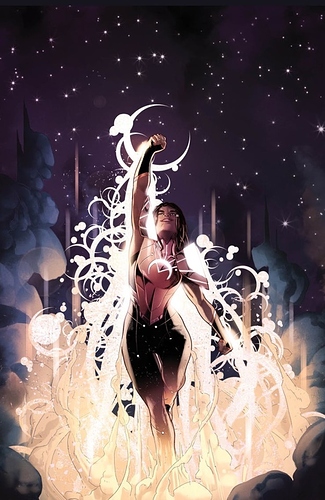 That’s even cooler than Vixen! I’ve been meaning to read Naomi’s series ever since it started being added to DC Universe. Definitely going to get on it now since I hear it’s great. Makes her positioning in the photo incredibly interesting.

Naomi is cool. Great to see a new face in the JL. It would have been more fun to see Mary or one of the other Marvels than Billy. Or Kara rather than Kal. Or Barbara rather than Bruce. But Naomi is a nice change of pace. With her being the brainchild of Bendis hopefully she will be important enough to give the JL title a much needed refresh.