Update: We have an ongoing Listen Along for this Podcast here: Listen Along | Talk Ville - Smallville Rewatch Podcast with Tom Welling and Michael Rosenbaum | Weds. 8PM EST | Smallville Fan Club

This is not a drill Fan Club!!! 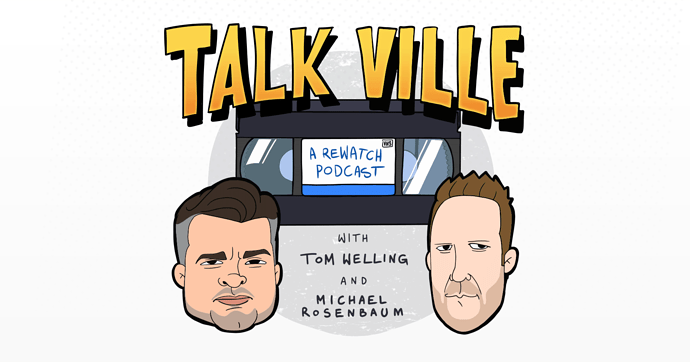 It was only a matter of time! Join costars Tom Welling (Clark Kent) and Michael Rosenbaum (Lex Luthor) as they take you behind the scenes of one of the greatest shows of all time, Smallville. With this weekly dose of nostalgia you will get an inside...

The promo episode is out! There is a hotline!!!

We want to hear from you!

One of the things we’re looking forward to most with this rewatch is hearing from you folks.

Let us know what you thought about Smallville… what you liked, didn’t like, etc. Call in to our Talk Ville hotline to leave us a message with a question or comment for an upcoming Smallville episode and you can have it answered in an upcoming Talk Ville release.

Don’t forget to leave your name and where you’re from. And try to ask questions for Smallville episodes we haven’t seen as part of the rewatch, so we can answer them during our breakdown of the episode that week. Love.

Club, we’ve got to put our heads together and come up with some questions!!

Are you hyperventilating too?

OK, so obviously we need to start a listen along to the podcast release dates.

OMG can you imagine the behind the scenes juice we’re going to get!!!

I need to sit down.

That’s so awesome! There’s so much to ask them and saying something as well!

I Didn’t Like Having Clark Kent and Lex Luthor as Best Friends!
But, They Pulled It Off!
It Was New and Different!
It Turned Out Pretty Good, Magnificent!

I’m glad you posted about it. I didn’t think anyone was excited about it when I mentioned it.

I’m so glad you tipped me off about it @JusKris-El !! I was not expecting the call in hotline!! I’m soooooo excited!

How cool would it be if they were here

OMG they can take whatever they want if they plug the club!

There’s so much to ask them

this sounds like a lot of fun. Smallville was so good and set the tone for so many shows that came after it.

I Didn’t Like Having Clark Kent and Lex Luthor as Best Friends!
But, They Pulled It Off!
It Was New and Different!
It Turned Out Pretty Good, Magnificent!

Believe or not Clark and Lex’s friendship was based on a Superboy comic where young Superman was friend with young Lex who saved his life.
But by the end of the story they were enemy when Lex blame Superboy for losing his hair!
I 100% wish DC Universe Infinite has this classic story, so far I don’t think they do, so hopefully I’m wrong.

I remember them talking about this a month or so ago when I went to the Superman Celebration in Metropolis IL, when they were at a big Q&A session. They were very hilarious, totally worth being surrounded by a group of hot and sweaty nerds under a tent. It sounds like this show is going to be a lot of fun to listen to.

You were at the celebration!! Congratulations on making it to the event of the year! I’m getting my ducks in a row to go next year!

Im already on season 4. I couldnt help it

Hey @Bar-El, I just now finish Season 5 of Smallville. I’ll probably start Season 6 in a few days or next week. Tomorrow I start watching The Adventures Of Superman and write a review on it.

Im about to finish season 4 of smallville

The podcast has been