Book Breakdown: I Am Not Starfire 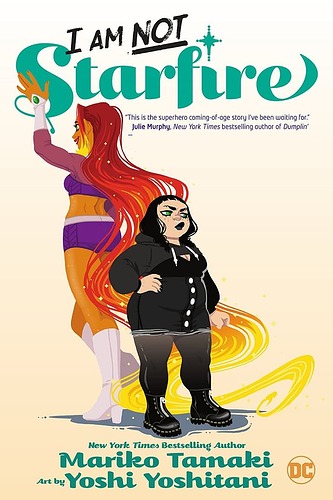 Welcome to Ink Spots, a quirky little corner of DCComics.com devoted entirely to all of our
favorite Young Adult comics and fiction. In this new Book Breakdown, Mandy Curtis meets a fellow Mandy with some super-sized issues.

Mandy Anders seems like a pretty standard teen with a chip on her shoulder and a heavy helping of “you don’t understand me, no one understands me” attitude. But when you factor in that her mother is a famous superhero—the Starfire—her angst makes a little more sense.

The latest book in DC’s YA graphic novel line—I Am Not Starfire, written by Mariko Tamaki and illustrated by Yoshi Yoshitani—imagines a world in which a superhero has a completely normal daughter and said daughter wants nothing to do with her mother’s career or fame.

Want to get to know Mandy and learn more about what it’s like to be Starfire’s daughter? Read on for a breakdown of the book.

I’m getting major odd couple vibes from this fantastic cover, which says a lot about how Mandy feels about being Starfire’s daughter. The sneer on her face, the aggressive stance, the fact that their backs are turned to each other and it seems like Starfire has no idea she’s even there. (I mean, she’s literally in Starfire’s shadow…) There’s a lot of tension going on here. But Mandy also looks amazingly fierce, and I immediately want to get to know her better.

Tell Me a Story:

For a full breakdown on this upcoming tale, head on over to DC Comics!

Are you ready for some new Starfire in your life? Let us know in the comments!

I was won over by the book itself. I convinced myself that I wasn’t going to buy it, but I was able to get an digital ARC and while I know I’m not the prime demographic for it, I was rooting for Mandy by the end of it.

I was only mildly interested in this book before it came out, and was disappointed that about 1/5 of the physical copy of Poison Ivy: Thorns was just a sneak peek at this book, because when I’m reading something that suspenseful I have to constantly check how much is left, and that really messed me up. But back on topic: I was surprised by how much I liked this book. I’m a sucker for near-future stories like this, and I liked the goofy sense of humor - As soon as I saw that Starbolts is trademarked, I was sucked in. I have mixed feelings about the art style, though. And there weren’t really enough easter eggs - though I loved the autographs (especially “Robin (IV?)”). And what’s going on with the mystery over Mandy’s biological father? It feels like this book wouldn’t need a sequel, but I need to know! I mean, it has to be Dick. But why would he keep it a secret?

I really hope the sales numbers for this book end up being pretty high. Most of the backlash has been beyond disgusting and completely misguided toward a story meant for younger readers (though definitely not little kids). Even though I’m not really the target demo for this, I’m always glad to see stories that can help inspire those who need it, which makes all the unnecessary hate even worse. But the best way to shut up all the trolls who look at this book and decry the end of DC would be to prove that this is exactly the kind of book a lot of readers want to see

The YouTube channel Casually Comics did a good review and rundown of the book and of the whole controversey before it. In a fair and impartial way. Does contain a lot of spoilers so anyone wanting to read it may want to skip it. But thought it was a good rundown of the book…

I Read I Am Not Starfire And We NEED To Talk…

I know you can embed YouTube videos but the thumbnail had a potential spoiler.

Most of the backlash has been beyond disgusting

all the unnecessary hate

the whole controversey before it

Right after the book was announced, a ton of people online started body-shaming Mandy and offered all sorts of gross and unnecessary theories about who her father must be. You’ve also got the usual comicsgaters decrying any effort from DC to ensure even a little extra diversity in their books. There’s also been some fans concerned that this is erasing Kory and Dick’s daughter from the Kingdom Come universe, Nightstar, despite the fact that both that continuity and the book’s are outside the current main one. I’ve seen some legitimate criticisms of the book that don’t bring any of these factors into play, but by and large there’s just been way too much ugliness regarding the fan response

Oh gods, I figured there was your usual people whining about wokeness whenever LGBTQ+ characters are even implied, but the body-shaming genuinely didn’t occur to me. (And yeah, it would’ve been nice if there was some sort of connection to The Kingdom.)