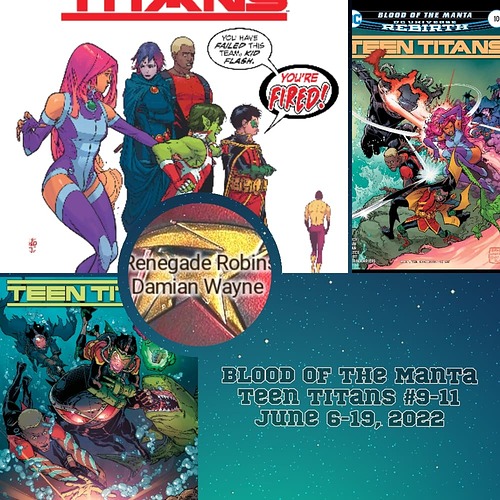 Long time, no see! The Damian Wayne branch of the @RenegadeRobinsClub is back! I feel the need to apologize to all of you for the long overdue hiatus I took here. I had a lot of IRL issues that happened unexpectedly right as I was prepping for our return in the spring that I needed to focus on. I’m sorry for that.

For our first session I thought we could take it easy after the craziness that was Lazarus Contract and read a short story arc that deals both with the aftermath of the aforementioned story and with Aqualad discovering something about his powers amd his past. So lets dive right in shall we?

And that is all for this session. Up next we will be following Damian into Superman for a story called Black Dawn. What do you do when your self proclaimed “best super friend” seems to be losing his powers? We’ll find out next month. Hope to see you there.

Yay! Stephanie’s been lonely in this club lately!

I suppose Damian shouldn’t leave his bestie by herself. I know Damian would deny their friendship until he was blue in the face but that doesn’t mean he doesn’t care.

Also, it’s been a while since I read this Aqualad story, but it is an engaging one. And per your question about Kid Flash . . . when does this Boy Wonder not overreact?

And per your question about Kid Flash . . . when does this Boy Wonder not overreact?

Pfft. It must be in his blood. Wonder where he gets it?.Bats? His mom? Ra’s? Steph? Jay? Some random dude off the street?