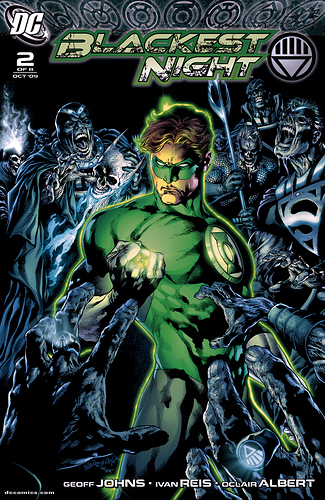 Not super familiar with where the Titans arc, but the denial of the black ring was an interesting concept. Having watched Titans on here, I understand the Hawk/Dove thing a bit better now, so that’s nice.

The intro of Deadman was good. Damian going nuts despite not knowing what was happening was nice to see. Nightwing really seems to be taking on his new role as Batman as well. I didn’t know anything about Deadman first I read this, and I still don’t really know anything about him, but I think he was introduced well.

I’m really enjoying the black power levels slowly rising. It gives that anticipation and excitement of what’s going to happen when they hit 100%. Also, huge fan of the zombie-vision. Seeing colored silhouettes of people based on their current mood is really cool. Loved the panel of Superman with a spectrum of emotion.

I have said before I will say it again. This story line is absolutely the greatest story line in all comics. In 2009 when this came out nothing Marvel, Image, IDW or any of the companies, heck even anything else DC had going at the time could touch this event.

I kind of fell off of this because I was having so much fun with the mafia game. The storyline is pretty fresh in my mind but I need to figure out exactly where we are this week before I comment on anything specific.

I will say that I didn’t always like how the black lanterns power came from “getting a rise” out of someone. But after reading it fairly recently .I think it’s fan service. The heroes reveal a lot about themselves as they interact with the BLs. That is a great way to get to know them. Plus, the use of obscure (sometimes dead) characters is great for fans who know who they are and it’s cool to see them in the story. Black Hand being the BL “general “ is great. He was kind of interesting before this, but a little obscure and maybe low level. It’s nice that he’s in the limelight. Geoff Johns is great at bringing forgotten characters back to life.

I never really knew that BK was so meaningful to veterans. Kind of makes me think of it in a different way. Ya know a good way.

Man! I love this story! From the creepiness of Black Hand to the incarnations of the characters as black lanterns. I pick up on small nuisances every time i read it.
I think my favorite issue this week was definitely the Titans. Could you pack anymore action into the book? The fight between the Hawks and Dove was epic! Very brutal. Also, I love Starfires bluntness. When she shared her feelings on the Tera statue, you could almost hear someone saying “What? We were all thinking it!”
The Superman issue was cool cuz,
1 It’s fun to see Supes with a sidekick and Connor kinda fit that role here
2 Who doesn’t love a Superman with Superboy by his side throwdown against Superman from Earth 2?
I didn’t really like Dick Grayson as Batman so this wasn’t a favorite read of mine but you could feel the despair from him when Dick found Tim’s, and then his own parents graves desecrated. I did enjoy Damian not being such a lil ■■■■ as usual in this issue.
I love this story and am getting more excited as we get more into it. I can’t wait for next week!

The ladies fighting over who was Aqualad’s favorite is the best bit in the main issue. Really ladies, this is what we are going to fight about? But the Batman issue was the strongest single issue. Grayson musing about death is heartbreaking. Also, that variant cover was just gorgeous.

My favorite book in this group is Batman because I think it is a great extension of what is going on in Morrison’s Batman and Robin with Damian and Dick trying to save Gotham the best they can.

My favorite issue of this group is BN 2. I love Hal and Barry, so any chance to see them team up is excellent.

I love this story line like i have said in the other threads.
I have said before as well. That Black Hand honestly gives me the creeps thanks to this Story Arc.
The Superman side story was great.
I do find it interesting though that for some reason I heard the Wayne’s were off limits for Geoff to make BL.
Not sure if it’s true or not, but they didnt come back.

The Superman side story was great

Having started Injustice right before starting BN, I had to stop for a second when they talked about Lois.

Catching up on everything, I know I’m behind, forgive me, But to pick a favorite is tough. this was a good group because of the start of the short run Tie Ins Like Bats and Supes.

I LOVE Boston Brand, and I really found Batman #1 to be funny, Damian Kicking the crap out of Dick. The comments Brand makes about Damien being a “Loose Cannon”. Red Robin’s Page was great!

Having the whole Super Family Together, with Connor, Kal-El, Krypto’s drawn amazing with his cape!

The most compelling person, for me, in theses issues is Mera. Certainly she is having to deal with a wide range of emotions, yet still is badass enough to escapes from the doom that Aqualad/Garth/Tempest could not.
Also loved the shark attack panel. 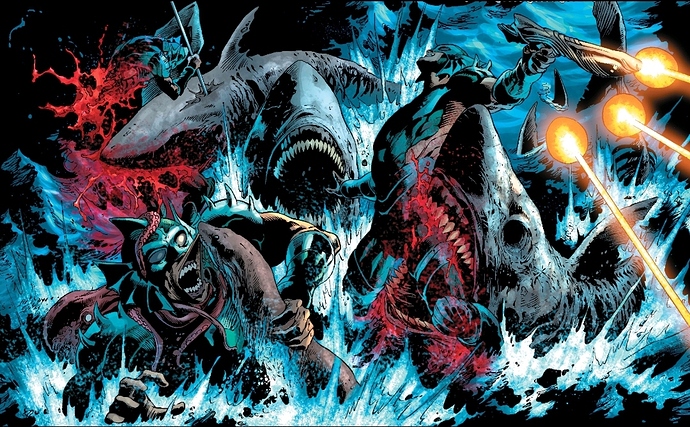 Screenshot_20200812-045710_DC Universe1080×669 731 KB
Deadman showing us that the souls of the of the dead are not connected to the BLs is promising and that he has given the living their first clues as to what is happening.
Dawn Granger/Dove had a white aura that the BL could not interpret. My guess is ‘Peace’, the same as why Don Hall/Dove couldn’t be resurrected.
Still don’t know who the BL was that showed up to confront Spectre/Chrispus Allen. Maybe an earlier version of Spectre/Jim Corrigan??
1 Like
Jay_Kay August 27, 2020, 1:49pm #13

Most of these were pretty damn good. The main event comic kept things moving in a good way. Batman had some good character moments, especially for Damian. Superman started off really good setting the mood for this quiet, small town horror story, and Titans set up the conflicts for all the characters really well.

I think I’ll have to end up going with Batman because…well, look at my avatar and tag, I’m a wee bit biased.

This is always a hard question, because I’ve read so many of these in the past. I think I’ll go with Damian being too scared to pick up his grandparents’ bodies. It’s rare to see Damian so vulnerable, especially at this period – though I suppose it shouldn’t be too surprising, given Tomasi being the writer. Guess I didn’t realize he was doing that stuff with Damian before the New 52.

I mean, Gotham is a wild, crazy, dangerous place a lot of the time, they’ve seen just about everything. But super-powered emotion-feeding zombies? That’s definitely a new one.

Seeing colored silhouettes of people based on their current mood is really cool. Loved the panel of Superman with a spectrum of emotion.

Yeah, I have to say the coloring on a lot of these books were VERY good, especially since colorists rarely if ever get the credit they deserve.

I will say that I didn’t always like how the black lanterns power came from “getting a rise” out of someone. But after reading it fairly recently .I think it’s fan service.

I think there’s definitely a component of that, but I think what makes the Black Lanterns work so well is that they take what’s scary about zombies and take it to the next level.

I’m reminded of something that Simon Pegg wrote for an intro for The Walking Dead first volume paperback. There, he talks about how while the shambling, the rotting flesh, the tearing of people’s entrails, that’s all bloody gloss over what makes zombies truly terrifying: death. The slow, approaching, inevitable death of everyone you know and…you. The idea of seeing someone you know and love, suddenly being back, a seeming miracle, that ultimately becomes a nightmare.

The Black Lanterns take this and crank the dial up to 15, let alone 11. Because they speak – not only do they speak, they speak all the most terrifying, personal things that you are afraid of, because you’re afraid that they could be true.

So yeah, all that rambling to say that I really like that “getting a rise” out of stuff the Black Lanterns do as well.

Also, I love Starfires bluntness. When she shared her feelings on the Tera statue, you could almost hear someone saying “What? We were all thinking it!”

I’m still not entirely sure how fully in character that was for Kori. Like, she’s a very blunt woman, but she is also very much in touch with her sense of love. I think she would absolutely hate Tara for what she did, but she would also understand Gar’s love for her, even if it’s for a an idealized version of a girl that simply never existed.

The most compelling person, for me, in theses issues is Mera.

Absolutely. I think her arc in this event is going to be a fun one to reread again, because I think it’s fair to say that the Mera that we know and love today really started here in Blackest Night.

Ok, I fell off trying to catch up right here and am now way more behind lol. I think I’m going to skip reactions for this week because I read the books a wile ago but never wrote em up, and go on to the next week.