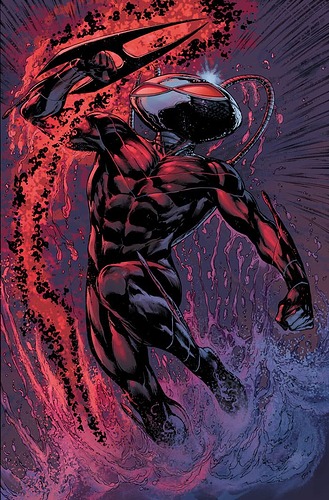 Black Manta was created in 1967, but did you realize he didn’t even have a human name until decades later? As we wrap up our week of super-villains, Lissete Gonzalez dives into the strange past of Aquaman’s most iconic foe.

Let’s be real, we all know who Black Manta is. He’s without a doubt one of the best and most iconic super-villains to ever exist. Don’t @ me, you know it’s true.

But even if you already know that he’s a ruthless underwater pirate and mercenary, there’s a lot that you still don’t know (quick, what’s Black Manta’s real name?!?) and with Aquaman and the Lost Kingdom primed to make a splash in a few weeks at DC FanDome, it’s about time you get up to speed on Aquaman’s greatest and most menacing underwater foe.

Black Manta was created by writer Bob Haney and artist Nick Cardy in 1967 and made his first appearance in Aquaman #35 . For quite a few decades following his introduction to the DC Universe, almost no backstory was provided for him. He was a very mysterious character acting upon unknown motives with the sole purpose of taking out Arthur Curry. It wasn’t until ten years after his introduction that he even unmasked himself for the first time, revealing to Aquaman that he was African American. Yet even after this, nobody knew anything more about him other than the damage he was capable of inflicting on Aquaman, the worst of which was undoubtedly the murder of Aquaman’s infant son, Arthur Curry, Jr.

But that changed in 1992, when Black Manta was given his first legitimate origin story in Aquaman #6 , which also turned out to be one of the darkest iterations of his character.

To learn more about Black Manta’s dark past, head over to DC Comics!

Are you a fan of Black Manta? Sound off in the comments!

Unfortunately, the death of ‘Aquababy’ got lost in history. For the times, it was a bold, daring move. It could’ve been the ‘Gwen Stacy’ for Aquaman/Mera. I never liked the death in the first place, but so many wasted story points. Imagine, Black Manta feeling remorse for the death and could’ve provided a unique layer to the character.