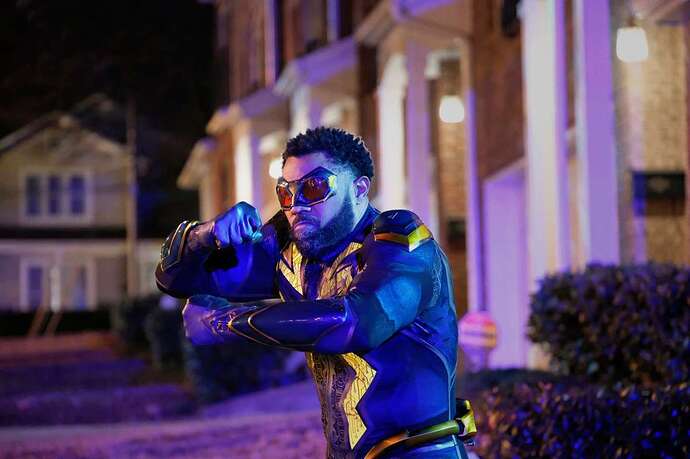 After four seasons, training a family of superheroes, years of fighting a nefarious crime lord, one multiversal Crisis and saving his city countless times, Jefferson Pierce’s journey has finally come to an end.

This week at the #arrowverse-couch-club, we’re honoring the legacy of Black Lightning by coming together and watching the series finale. After seeing his rivalry with Tobias Whale play out for years, Jefferson is ready for perhaps the final confrontation with his greatest enemy, and he’s not going to let anything, not even death, stand in the way of saving his city.

Now the second Arrowverse show to end its run, Black Lightning has certainly left a unique mark on this universe, as it didn’t even start in the same continuity as the Arrowverse but was ultimately folded into the mix through Crisis on Infinite Earths. Beyond providing the kind of superhero action and family drama the CW is known for, the show also tackled complex issues of race, as not even a family of heroes was untouched by the ugliness of prejudice in Freeland. That already made the task of raising a family difficult enough, but throw in two superpowered daughters in Anissa and Jen and you’ve got one of the most complicated lives anyone could ever ask for.

It’s certainly the kind of life that puts a big strain on Jefferson’s marriage to Lynn Stewart, but while they started out already divorced on the show, continuing to raise their children and working together to help keep Freeland safe helped remind them just how much they truly love each other despite all their differences. Though many different villains threatened the safety of the Pierce family over the years, none stood out more than Tobias Whale, who was almost always the biggest threat facing the city at any given moment. This gangster was the one who murdered Jeff’s father decades ago, and after fighting against him for so many years, Black Lightning is finally ready to take him down once and for all, by any means necessary…

If you’re not yet a member, be sure to join the Arrowverse Couch Club! Though Black Lightning is now over, we’ve still got four active shows to break down each week: Legends of Tomorrow, Batwoman, The Flash and Superman & Lois, with Supergirl and Stargirl also returning in August. Click here for more information and here to join!

I have seen a few people on Youtube trash this season and call the CW racist and say they don’t know how to handle black shows. Umm… All American says hi lol. And Batwoman seems to have finally gotten good recognition. I feel that they did the best with what they could. With both the Pandemic and China’s sudden exit, they had to improviese. It was indeed sloppy, but what they have shown with Painkiller shows that if he were to get picked up to series, there is care there.

I can’t speak to any of the non-DC shows on the CW, but I do understand criticisms over BL, even if I wouldn’t go quite as far as those commenters have. You know how frustrated I’ve been over the lack of promotion this season, and I don’t quite see how the pandemic or China’s exit would’ve been a proper excuse for that. But I’m also tired of airing out the same complaints (for now) and would rather just focus on all the positives of the legacy the show’s leaving behind

I haven’t watched All American. And I am not sure if Batwoman got renewed or not.

I am sorry to see BL end, but it could be to make room for other shows. It had a strong first season. Season 2 lost its pacing. The third season was a little better, but I dig a good war. And this season is like a wrap up: some closure for a few things, leave a few things open, at least one may be addressed in one of those crossover episodes planned for next season.

And I am not sure if Batwoman got renewed or not.

Batwoman did get renewed for a 3rd season!

Just about a day until we kick this off! Hope everyone’s ready to bring the thunder and lightning

I think i messed up my count…

I didn’t check the specifics, but I’m pretty sure the timing of your last one was accurate. But for the sake of full accuracy now, exactly 43 minutes left!

Cutting my last minute take out kind of close. I might be behind, but I’ll be here!

And for the final time, let’s get this started!

Gee Tobias would not lie about Jefferson being dead would he?

What happenned to his meta that can nullify powrrs at will. I am trying to remember as she does not seem to do much here

Man, not hearing “Last night I saw a superhero, he was black. He said, ‘This is for the streets, Black Lightning’s back!’” just hits a lot differently

It does. I noticed that too, I wanted to hear it one last time but thats not the mood they were going for

Doesnt any of these bad guys learn from the Bond films. Just kill the hero, dont play theatrics where they could escape

…and She is trippin’