Black Lightning to End With Season 4 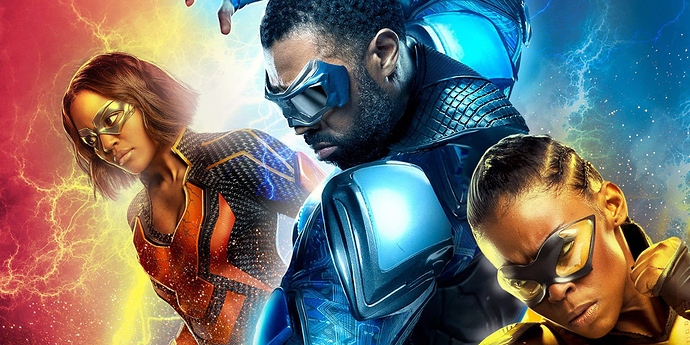 Black Lightning Ending With Season 4 On The CW

I just read online that Black Lightning’s 4th season will also be it’s last. In all honesty it was never my favorite show, but I’ll still be sad to see it go. I’m also concerned about that this means for the Arrowverse going forward.

What do you guys think about this?

If Stargirl is okay I am fine, but I keep hearing commenters saying they love it.
I then heard they only like season 1, and it kept getting worse.

I’m a bit sad to see it go. Black Lightning is among my favorite DC shows, along with Doom Patrol, Swamp Thing, Stargirl, and Legends of Tomorrow.

It’s really disheartening to see Crisis finally set up a proper Justice League, only to now know that more than half the roster will likely be gone by this time next year. I’ve really enjoyed Black Lightning and thought it had a few more good seasons left in it, but I’m at least hoping this was the writers’ plan instead of something dictated by the network

Black Lightning had an amazing first season. The second season wasn’t as good but it was still worth watching. However, the second season pointed out a major issue I have with the show…the pacing. An hour show shouldn’t feel like two hours. For some episodes the slow pace worked as it gave us time to learn more about Jeff and his family but when Jennifer ran away from home those episodes were a chore.
I tapped out of the third season for this exact reason.

However, I can see why it’s ending. It wasn’t strong in the ratings. I guess with new shows like Superman and Lois, returning shows like Stargirl and Batwoman, potential spin offs like Painkiller and Green Arrow & The Black Canaries, some of the older shows are going to make way for the new.

Unfortunately, it’s hard not to see a pattern, here, introducing spinoffs of CW shows without much potential and less representation (Superman and Lois, Painkiller), canceling the “host” series that Netflix has a contract to show, and (I assume) hope it pushes people to HBO Max before AT&T needs to admit that it’s a failure that still can’t even get HBO subscribers to bump over.

At this rate, it’s hard to imagine Flash or Legends of Tomorrow hanging on much longer, even though the most obvious spinoff characters of those shows have either been fired or written out. It’s not like their ratings are so different, if that’s the excuse.

At this point, though, Black Lightning is the only show I think I’ll really miss. The show could be uneven, but with the exception of this past season’s attempt to overhaul Flash (which COVID-19 disrupted, so we don’t know how well it worked, other than showing that Candice Patton can easily lead a show), it was the only Arrowverse show that was trying to do something structurally different for each season, and its willingness to confront real issues (instead of raising and ignoring them on Supergirl) definitely made it the most important of the shows.

I was really enjoying Black Lightning until they started connecting it to the other shows. I was enjoying it standing alone and once it wasn’t anymore I lost interest.

Can’t say I’m surprised. It was going really well until they connected it to everything else. This is what I fear is gonna happen to Stargirl and I am NOT okay with it. I will be pissed

Well, that sucks. It’s probably the most consistently good series on the CW. My biggest complaint is probably some “back-and-forth” with Painkiller, like killing him off, bringing him back, etc., but overall it’s one of the few shows I’ve looked forward to on that network.

Maybe some fan campaign or something can bolster another season.

But outside of Crisis, it still feels like its own thing. I feel like Jeff only made passing mentions to Crisis once or twice after it happened, but other than that, they never had any characters from the other shows appear or even really mention things happening outside Freeland. I imagine that’ll change a little for the final season, but I never got the sense that being a part of Earth-Prime took anything away from what makes the show special

@arkhamassassin Thank you! I completely agree.

, canceling the “host” series that Netflix has a contract to show, and (I assume) hope it pushes people to HBO Max before AT&T needs to admit that it’s a failure that still can’t even get HBO subscribers to bump over.

I think you nailed it on the head here. They want the shows to go to HBO and not Netflix and the only way to do that is to cancel them and introduce new shows.

Really sad to hear Black Lighting is ending, it’s consistently one of the best CW superhero shows. It the motivation here really is a desire to end shows with Netflix contracts and replace them with ones that can stream on HBO Max, then there’s a perfect solution to the problem: have season 4 be about Jefferson training the next generation of heroes (which already looks to be the plan) and replace Black Lightning with a new Outsiders show where he is the team leader.

I’d absolutely watch a show like that. Hopefully that’s what they’re doing, but I don’t find that to be likely.

Black Lightning is really a special show, and I love how it’s different from the Arrowverse with its own stories, messages, production style and music. Its limited connection to the Arrowverse doesn’t bother me, and BL’s “Crisis” episode was an amazing showcase for China Anne McClain’s character.

That said, i think BL’s departure has less to do with Netflix, and more to do with overall ratings. Four years is not a bad run. But I would have preferred to see more of Cress Williams, the Pierce family and Gambi. And Tobias, Lady Eve, and Gravedigger. I’m not that excited about Painkiller having his own show, but I’ll give it a chance!

I did think that having 5 or more shows with new episodes weekly in the CW/Arrowverse was getting to be a bit much, especially with even more shows on DCU/HBO Max in production. I wound up saving watching Titans/Doom Patrol/Swamp Thing for the CW off season, which came in handy this year!

Yep, that nails it, as far as I am concerned, but if they build a new DC Tv verse on HBO Max I am fine with it.

That said, i think BL’s departure has less to do with Netflix, and more to do with overall ratings.

The problems with that theory are that all Arrowverse shows have roughly the same ratings, and there’s almost no chance that the show led by a nobody (if extremely promising and charismatic) actor playing a nobody character will perform better than DC’s first Black superhero. You’re definitely right, though, that the run we got is better than the “we just need to get to sixty-five episodes for syndication” runs that are a hallmark of a lot of genre television.

if they build a new DC Tv verse on HBO Max I am fine with it.

I don’t know. Granted, this could easily be sour grapes, because HBO Max doesn’t interest me as a service and isn’t available for my devices, but I feel like their new shows are going to go the way of Netflix, where originals are only going to last more than a year if each season increases the subscription numbers, and DC shows probably aren’t going to do that for them for very long.

The ratings probably played a part, but if ratings were everything, Batwoman would have been cancelled already.
4 years is a good run for a show. Personally, it would be great if they could do a show, have it last 3-4 years, then debut a new character. Usually after 3-4 seasons a show starts to become stale anyway.

I was just checking out the ratings for the last season. The Flash pulls in more than 2 million viewers per episode. Batwoman, Legends, Supergirl, Stargirl, and Black Lightning all averaged over a million. I didn’t look at Swamp Thing because its fate was already set. All of the shows show a steady decline after their debut seasons, so the trend doesn’t look good for Batwoman and Stargirl, although it lacked the cross-promotion enjoyed by the other CW DC shows.

Assuming the Batwoman reboot is a success, adding Superman/Lois, Stargirl, Legends and Flash still gives us five shows. I’m sure at least one of these will also depart next year and make room for Painkiller and whatever else they’ve got cooking.

Just a thought, shouldn’t Painkiller be an HBO Max show? It seems like the writers could have a lot more freedom that way.

I loved season 1 of BL but season 2 lost me. It has been on my todo list if I ran out of shows but I never got back to it.

Sad to see it go though.