There are so many ways to celebrate black history this month from visiting a museum or attending a virtual event, to seeking out and supporting black creators and businesses.

But we here in the @ModernAgeSupermanClub feel it's only appropriate to celebrate all the holidays in super style!

We've collected all the supermen and women across the multiverse to give you a one stop shop for this week's book club. Stop back here anytime this month and grab one of these off our shelf!

Check out our Watch Party this Saturday for Season 2, Episode 21 of Superman: The Animated Series “Prototype”, the first DCAU appearance of John Henry Irons AND our main feature: Steel with Shaquille O’Neal!

Inspired by Superman’s heroic example, John Henry Irons builds a suit of armor and uses it battle evil as the superhero Steel.

Reign of Doomsday’ part 1! John Henry Irons is a normal human being who managed to overcome all odds and become a hero during Metropolis’s darkest hour. Now the very villain that led to his heroic first appearance in the DCU has returned—and this is looking for the Man of Steel! Continued in The OUTSIDERS #37. 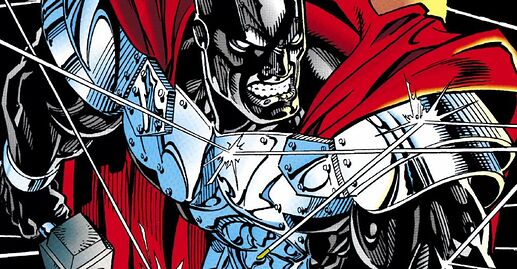 After his secret identity is revealed to the world, Steel’s niece, Natasha, gains superpowers and is forced to confront her uncle when he decides to avenge the Irons family by killing Hazard.

Mia, another Super-girl, joins the fight along with Natasha Irons and Girl 13. The trio sets out to stop a mysterious assailant who has delivered a near-fatal blow to the Man of Steel. ‘Supergirls’ part 2. 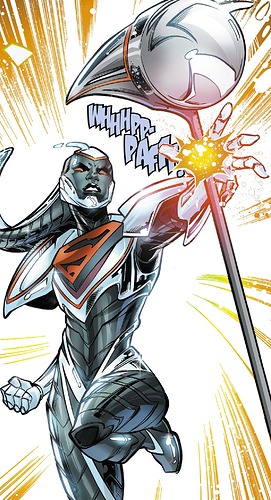 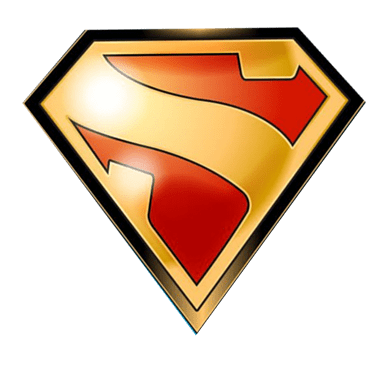 President Superman of Earth-23 uncovers a threat to all Reality so apocalyptic it will take a team of incredible heroes from across the Multiverse to face it! 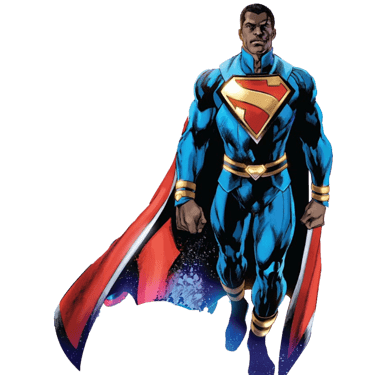 DC’s biggest, newest mystery starts here! When a fight between Superman and Mongul crashes into a small Northwestern town, Naomi begins a quest to uncover the last time a super-powered person visited her home—and how that might tie into her own origins and adoption. Follow Naomi’s journey on a quest that will take her to the heart of the DC Universe and unfold a universe of ideas and stories that have never been seen before. 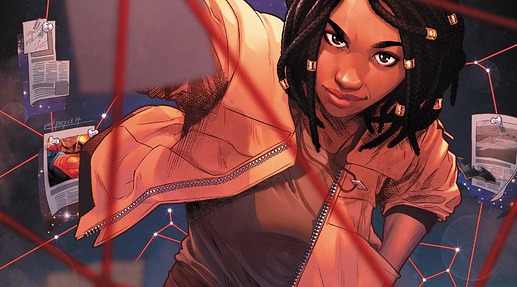 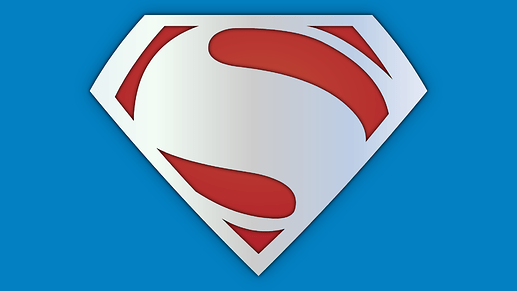 Val-Zod finally accepts his role as the new Man of Steel of Earth 2 and faces the twisted, brutal original Superman, who once protected the planet but now prepares it for Apokolips and the forces of Darkseid. 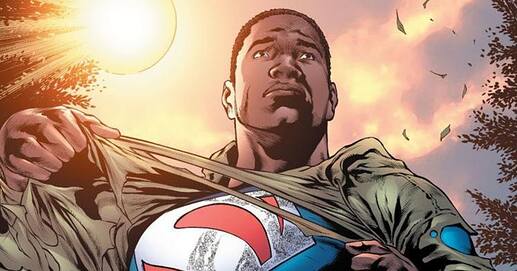 How are you celebrating Black History Month in Super-style?

What do you think of these Super(wo)men?

Which iteration of the Superman costume is your favorite?

Have you seen these characters pop up in other comics we don’t have on our list?

Tell us in the comments below!

Find all of our reading selections past and present, on the Modern Age Superman Club’s landing page! Join the club right here and get notified so you never miss an event!

Wait, is “Powerhouse” her superhero code name now? I’ve read her first season, but haven’t read much of her in Young Justice or Justice League.

Me either but that’s what the Wiki said!

Apparently Natasha has had mist powers at some point? Totally news to me lmao I left that out… sometimes it’s hard to know if its important enough to include or not.

And apparently Steel is back on streaming so we may need to add that to our WAL! I’ve never seen it!

Steel is indeed back on HBO Max.

Its also a movie that, along with Batman & Robin, Superman Returns, Green Lantern and BvS, was outclassed and outdone by the toy line based on it.

Steel is indeed back on HBO Max.

Fixed that for ya!

All jokes aside, I honestly do enjoy Steel. It is cheesy but it hits a lot of things I look for in a fun movie. Then when it added the light version of 90s blaxploitation in the mix, I was there for it. Also should be noted this is the closest we have come to getting a big-screen version of Oracle, even if they don’t call her that…

You can ask @Kon-El-Prime about my undying love for Steel. I think its a lot of fun popcorn flick that might have its flaws but the fun overcomes.

Steel’s fun, no doubt, but its a brainless fun that inspired a much more fun toy line by Kenner (which also included “Oracle but not Oracle” among its cadre of characters).

His action figure also looks nothing like him, which actually benefits the figure, as seen below: 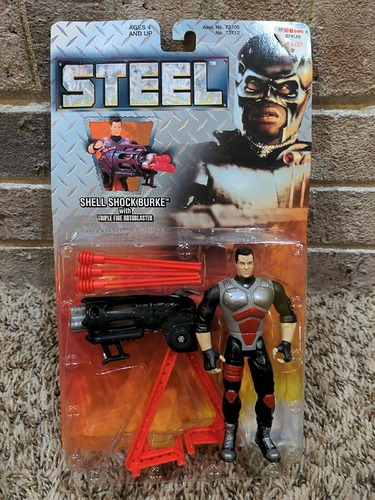 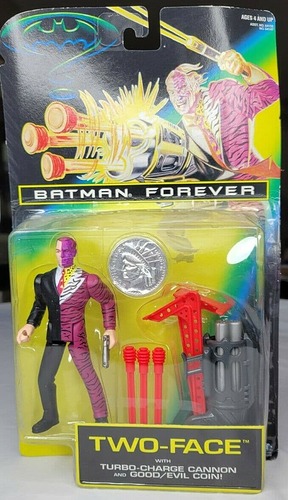 Too bad Burke’s toothpick-chewing crony never got a figure…

I need to look up how Steel got made. I am sure there is a podcast or something that does the deep dive on this thing. I like it but it boggles the mind. Like, were they planning on making a Superman movie after that? Was that the Nic Cage movie or was it going to be a death of Superman thing? So many questions.

It would appear that it followed the Catwoman model (and vice versa, given Catwoman came after Steel):

WB wanted a new Superman (Batman, in Catwoman’s case) movie, but couldn’t get one together at the time (Catwoman was greenlit long before Batman Begins came about), so they settled on a movie starring a related character instead, and thus was Steel born into our collective cinematic consciousness.

It is low budget

More than a little cheesy

But it has heart

Steel is not a genius
Like the comic book character

But he is a good man

Work together for the common good

Which is what I like in my movies and comics

wow, I was not expecting such a lovely recommendation!

How are you celebrating Black History Month in Super-style?

By reading the above books, along with a re-read of Tangent: Superman’s Reign, wherein the Tangent Universe Superman is black (the first black Superman of the modern era, if memory serves) and all of the traditional DC heroes (as well as select villains) are completely upended and different than how we know them.

Tangent (the original books, which are in our library) and Tangent: Superman’s Reign (not yet available in digital) are crazy good (and crazy creative) reads.

What do you think of these Super(wo)men?

They’re badass, and worthy of celebration all year long!

I especially like the Calvin Ellis Superman, who does have a foothold in the DC toy ecosphere. From late 2015 and produced by Mattel, I present the one figure of his that was released (the other is in limbo ATM it would seem): 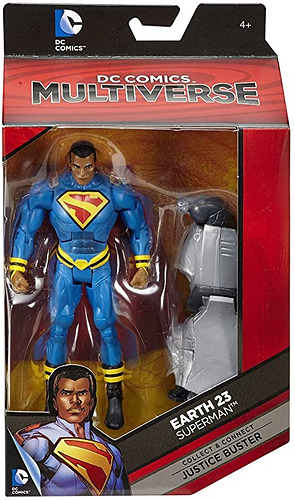 Which iteration of the Superman costume is your favorite?

Out of the choices in this batch of books, I’m actually going to be on Team Steel.

I would love to wear a badass suit of near-invincible armor and be able to move as easily in it as John (and Nat, with regards to her Steel suit) does.

Have you seen these characters pop up in other comics we don’t have on our list?

The Calvin Ellis Superman made his first appearance in Final Crisis #7, and then resurfaced in Acton Comics (2011-2016) #9. Both are in our library and are entertaining reads.

I’ve never heard of this! I hope it comes to the service soon because it sounds really cool!

I’ve never heard of this! I hope it comes to the service soon because it sounds really cool!

Like most everything pertaining to Superman, it is really cool!

Check out “Tangent Comics” in our library for where the Tangent Universe begins. Its pretty wild stuff.

My thoughts on some of the books that was selected:

This was an…interesting issue. It’s mostly set-up with some action, with John Henry taking on Doomsday, the being who indirectly made John the hero he is today. There was some clever fighting in how Steel tries to stop Doomsday, but there’s really not much to it. I am kind of curious to see where this story goes though.

Man, this really felt like coming into a movie just as the third act started. A lot of the character looked…of the time in some hilarious ways. Natasha gaining superpowers was surprising because I figured that was something that didn’t really happen until 52 when she went to Infinity Inc.

(I added the extra issue because it really is three parts)

These issues are…I would best describe them as aggressively 00s. From the frankly hideous attempts at urban street lingo from both the Superman robot that Natasha reprogrammed and Traci 13, to Traci’s gloriously over-the-top skimpy outfit. The stuff with Lana Lang and how she and Clark apparently kissed recently reminded me that this was also probably around the same time that Chuck Austin was writing Superman and…the less said about that the better.

I think this was the first time I really read anything with this black-suited Supergirl though (outside of a blink-and-you’ll-miss-it cameo in the first issues of Superman/Batman) and I am curious to read her story.

What’s funny is that while Natasha and Traci clash a lot in this story, in the most recent series where they both showed up prominently in Phil Jimenez’s Superwoman, the two were actually a couple, so this actually works as a fun meet-cute, with some of the more pin-up-y stuff like all three girls cuddled together sleeping in the same bed makes a little sense in retrospect.

wassup! I too dig the lingo, man. It’s sweet, and makes me miss my Nokia

I’m Surprised They Didn’t Have Black Superman Appear On Crisis Story Line On C.W.!
That, Would Have Been Awesome and Marvelous!