Black Canary vs Huntress - Who Would Win?

After watching Grudge Match for the 1000th time I kind of wonder… who would win in a fight? Black Canary or The Huntress?

While Black Canary has her powers, a well placed kick would render her mute making her powers useless, which the Huntress could ver easily do. However, both are well trained fighters with each of their own experience. So who would win?

For arguments sake let’s say there can’t be a tie. 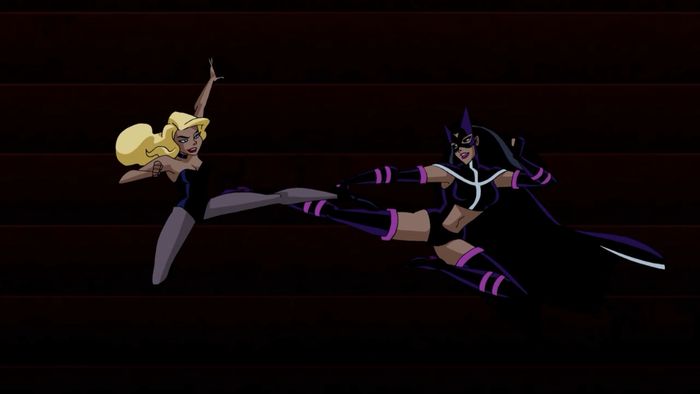 While the Huntress is a very skilled fighter and could easily make Black Canary’s cry useless with a well placed kick to the throat, BC is just as skillful and doesn’t need her powers to beat someone like Huntress. I think the Huntress would most likely rely on her gear to help get an edge, but BC would use her moves against her through parry moves. It would definitely be a very close fight, but I do think BC being trained by professionals fighters as well as having an experience edge would ultimately come on top.

Comic-wise, Canary’s pretty clearly the more skilled fighter even without powers. If I recall correctly, she’s better than Batman (in a strict martial-arts-skill sense) and at least something approximating a threat to Lady Shiva, while Huntress has generally been written as a little intimidated by the former and basically a speed bump to the latter. Not that Huntress isn’t very skilled, but Black Canary is a world class martial artist and Huntress is just the normal kind of awesome.

Long range, Dinah throws out the Canary Cry, she wins.

Close range, it’s gonna be more even, but while Helena is willing to fight dirty, Dinah is the stronger fighter. So Dinah would win, but she would be feeling Helena’s blows for a WHILE afterward.

I know Canary is probably more skilled because she’s constantly teaching combay and training but I am going to go with the underdog, I vote Huntress. I’d like to think she’ll surprise me and have some tricks up her sleeve that Canary hasn’t seen before.

In this instance, Huntress and its solely because she’s wearing a Jim Lee designed uniform.

Slightly off-topic, but while I love Jim Lee’s work on Batman in general, I hated his redesign for Helena. Like, her last big role before the events of Hush was in No Man’s Land, where she’s shot in the stomach by Joker’s goons to try to protect a children’s hospital. Why the FRICK would she wear an ab window?

Yeah, but even I’ve got to admit that her costumes that were full bodysuits all look much better than the ones that were swimsuits, style-wise.

Black Canary, ten times out of ten, even without the Canary Cry. As far as DC women go, Shiva and possibly Cassandra Cain are the only non metas that could give Canary problems.

Black Canary. Lets take long range out and call it even. (Canary cry vs crossbow) Dinah has trained by Wildcat (in some incarnations, since she was a kid) She not only handles martial arts as well as just about anybody in the DCU. She also how to brawl and counter punch better then probably just about anybody else as well.)

You want a REAL who would win. Strip Dinah of her cry and Batman of his “gadgets”. Strictly hand to hand, that would be one hell of a match. Bats would likely win, but, I think Dinah do more damage to him than Superman would. It wouldn’t quite be Bane level, but Bruce would be feeling that fight for a while.

There is a reason BC was used to train YJ members in hand to hand combat.

The Canary Cry can make Superman bleed, so it can incapacitate Huntress as well as shatter her arrows. If Dinah lost her Cry/chose not to use it, then she’s still one of the best hand-to-hand combatants in the DCU as well as the more experienced fighter (in most iterations I’ve encountered).

I don’t know but can I referee this shit?

If dinah lance than black canary if dinah drake the huntress

@inmagno how old are u?

@Foxy: How old would you like me to be? Lmao

this isn’t a fair fight…that’s your answer lol