Black Canary Solo Movie in the Works at HBO Max! 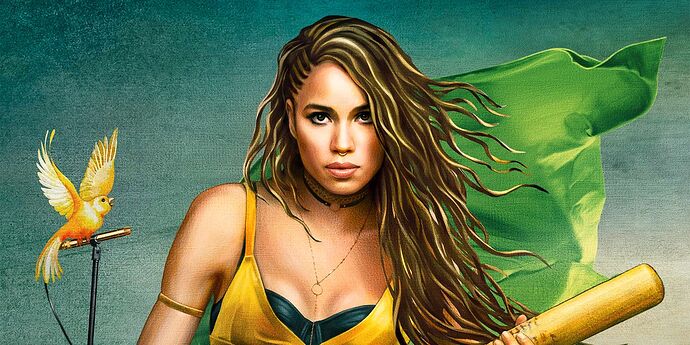 A Black Canary movie from writer Misha Green is in early development at HBO Max, with Jurnee Smollett slated to reprise her role as Dinah Lance.

Okay, I sincerely hope the people who liked Birds of Prey enjoy it. The only part of it I liked was Huntress so pass from me. I wish it the best, as I use other movies on my quest to watch 100 DC movies.

I keep forgetting that Birds of Prey happened

I cannot blame you, as I found it to be one of those 2 star movies that is simply “poor.” There is nothing notably bad to discuss, so I just do not think about it. Those are the worst to review.

Yeah, I never bothered to watch it because the costumes looked off.

While I haven’t watched Birds of Prey due to lack of appeal I might give this a shot and who knows maybe what they do with the character in her own film may even be better for anyone who came out luke warm from Birds of Prey.

It’s happened before (Tyler Hoechlin’s Superman being a vast improvement in his own series or Rick Flag in The Suicide Squad being a much better version than the 2016 Suicide Squad).

It’ll still be a wait and see til’ we see a trailer for me but with all this cool DC content in the pipe line for HBO Max it definitely makes the appeal to watch stuff much more convenient.

Edit: Guess my only thing is I hope this wasn’t suppose to be a secret to reveal at DC Fandome, it’d suck to get too many leaks before the event.

Such great news! I loved BoP’s take on Dinah, and getting a chance to really dive deeper into her character should be a lot of fun. Hopefully the actions scenes are appropriately really intense, and maybe we could even see the DCEU debut of Green Arrow?

I remember enjoying parts of BoP when it came out, but I honestly have forgotten most of what happened in it. Like, genuinely don’t think I can tell you a single part of the story. Not necessarily a dig at the movie/its quality. Just hoping this movie isn’t quite as forgettable.

I liked her Black Canary a lot so I’m down for a film. Green Arrow would be dope.

Birds of Prey would’ve been better without Harley and a better Cassandra Cain. Have Batgirl as the main role. Don’t get me wrong I liked Harley in the movie a lot and it helped to develop her character for the DCEU, but if it’s supposed to be the BOP then it should focus on them. Harley could’ve been with her other villainous friends Poison Ivy and Catwoman, but that’s a route that didn’t happen. Not so much Zsasz, but Black Mask was amazing.

I still don’t like Tyler Hoechlin as Superman. I don’t look at him and sense hope. Superman was inspired partially by Moses who had anger problems, social problems, yet saved the Israelites from the Pharaoh. Elements of that linger from Christopher Reeve who masterfully displayed meekness through the mistakes people pretended to ignore and the anger when he didn’t want Lois to die. Henry Cavill represented that based on Zack Snyder’s goal for a more modern take (although his Clark and Superman had the same personality). Tyler’s just tries too hard. Just my opinion.

As for Jurnee being Black Canary, I agree with what you said in your first sentence. Margot Robbie’s Harley Quinn has three distinct looks and her Birds of Prey look was awful, in my mind. Maybe in the hands of a different director, Jurnee’s look will actually reflect her comic appearance.

Birds of Prey would’ve been better without Harley and a better Cassandra Cain. Have Batgirl as the main role. Don’t get me wrong I liked Harley in the movie a lot and it helped to develop her character for the DCEU, but if it’s supposed to be the BOP then it should focus on them. Harley could’ve been with her other villainous friends Poison Ivy and Catwoman, but that’s a route that didn’t happen. Not so much Zsasz, but Black Mask was amazing.

I loved her take on Dinah in BOP and very happy to see this.

As for Green Arrow questions…part of me kind of hopes that if he does show up, he’s not a central figure, I kind of want Dinah to really shine. That said, peep the emojis from Smollett and writer Misha Green’s tweets… 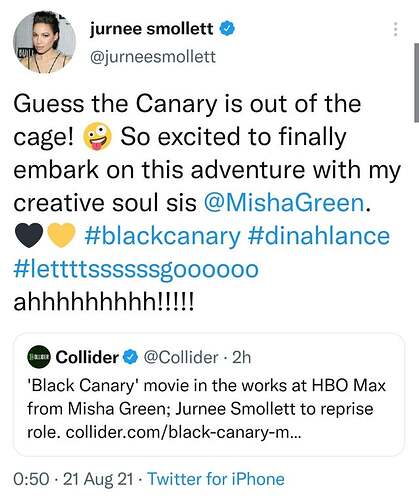 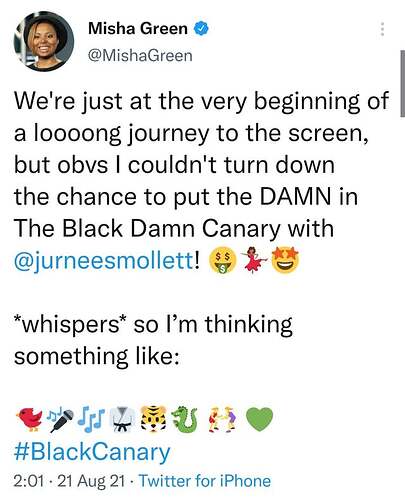 Of course, this needs to be Dinah’s show. But there’s no reason they shouldn’t be able to introduce Oliver as a supporting character here, letting their relationship start to develop while still keeping most of the focus on Dinah

If you have not watched BOP you should. I was not all that excited about the movie when it came out, but I went and saw it anyway and was pleasantly surprised. I think this Black Canary movie could be good. Maybe make her costume more black than gold

I can’t imagine not including him. And the green heart in that tweet indicates to me he will be. But who knows? As long as Dinah as center stage I’ll be happy.

My masterful translation of that emoji plot is as follows;

Dinah’s singing at a night club run by a not-evil former Robin (Tim Drake) but her karate skills are called in to service, fighting Bronze Tiger, Richard Dragon, and Bonebreaker (played by professional wrestler Becky Lynch?), to save a damsel in distress named Oliver.

The Tim Drake thing doesn’t seem that likely to me since in the DCEU we didn’t have a Robin past Dick. Outside of that, I could see most of that.