The thirst was real, even in the 90s.

and then it turned out it was actually Batman and she knew it!

I’m loving this the same way I love '80s Suicide Squad, where it’s slotting DC characters into different subgenres. I don’t know what I was expecting, but it wasn’t Black Canary as James Bond! 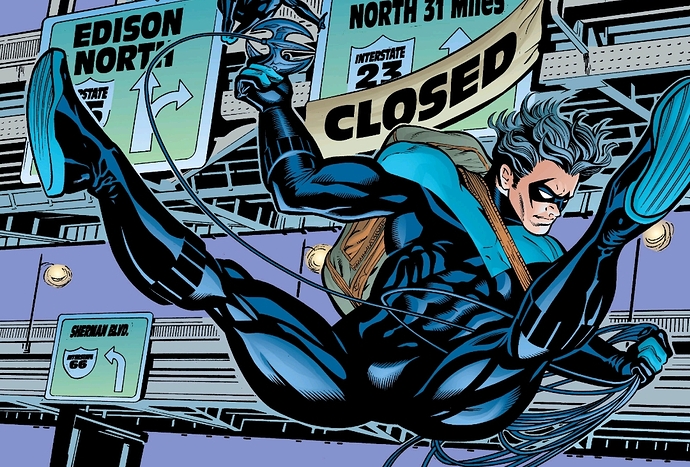 Hawkeye Initiative, eat your heart out!

I don’t know what I was expecting, but it wasn’t Black Canary as James Bond!

Hawkeye Initiative, eat your heart out!

I don’t know what I was expecting, but it wasn’t Black Canary as James Bond!

The evolution of Black Canary in this series is amazing!! I love how she is down on her luck in the beginning of the series and then seeing her evolve into so much more, pure bliss.

yeah, that was a really interesting place for her to start out. and Oracle’s definitely more interesting than M and Q.

I’ve been meaning to dive back in BoP and joining this club was a great excuse to do so. I started with all the one-shots and mini-series preceeding the ongoing, and man, did I really enjoy it all. I read it all as it originally came out at the time. My cousin had gotten me into the very first one shot, and started me on the path to following Dinah far and wide. I think I enjoyed it more this time around though. I’m a big fan of what Chuck Dixon did on all the Bat-Titles and the Connor Hawke Green Arrow he wrote during this time. He’s really on his game with the series. And the art? Greg Land was such a great artist before he started tracing the swimsuit models for covers. I forgot what it was like before he was a punch-line. I am really stoked to keep reading as I found myself remembering bits and pieces but more often than not the 20 plus years since my last read of these issues made it an almost new experience.

Well said! There’s so much richness of story and theme in these first four years of Birds of Prey!

Welcome! Really happy to hear that you’re enjoying the reread! It can be fun to revisit stories to see how our perception might have changed, for sure—and this one’s definitely not disappointing. Agree.

I am really stoked to keep reading

You came to the right place!

We look forward to reading more of your thoughts.

Alrighty, I just binged this since I finally had some time away from life to sit with my comics again.

First of all, love Oracle and love Black Canary. I have really liked Dinah in everything I’ve read of her so it’s cool to see her starring in this.

Secondly…okay, I’m just gonna say it. Batman has some serious breach of privacy issues. I mean I’ve already read the Brother Eye stuff so this is not news, but geez. Oracle calling him out (and Alfred’s smirk) was an amazing payoff.

Looking forward to reading the next issues!

Barbara having a fling with Blue Beetle’s almost as gross as her having one with Batman! she’s dating her batdad’s coworker! and he uses way too many emojis it’s weird and gross! and she’s still taking mission breaks for IMing! it feels to me like she’s being written to serve the plot so far. i really liked her issue with Dick, though.

Huh, I rather liked that plotline. Maybe because I really read this version of Babs as significantly older than today’s.

Okay, I haven’t fully read all the issues yet, but here are my thoughts on what I’ve read:

Overall thoughts, I actually liked this more than I thought I would. Honestly, I’ve never really cared for a lot of Chuck Dixon’s work and find him very overrated within the Batman books, but I think when he’s in his own book it works a lot better.

This was a nice start to this series – a quick, simple story to get new readers aquainted with the idea. I liked that we got a bit more of Dinah learning more about her confidant in Oracle, learning about the past love in Jason Bard, who…woof, man went through some stuff here. Thankfully it seems like he wasn’t permenantly blinded. But I think after this he doesn’t appear again until the New 52 which was a drastic change, so…eh.

This one isn’t as memorable as the first, but it sets up some ptentially interesting stuff. Like before, I really don’t care that much about the Ravens, though I think the situation they get themselves in at the end is interesting and I’m curious to see how they get out of it. The subplot about the NSA guys trying to track down Oracle had a fun conclusion here, but it brings up a plot point that really dragged this story down for me.

Batman spying on Oracle. I hate hate HATE this. No. That’s just dumb. It feels completely against the character of Batman and it just continues the bad track record some writers at this time had of trying to make Batman an unfeeling, socipathic dirtbag, where they’re trying to imitate Frank Miller and failing at every single turn. Chuck Dixon just writes a terrible Batman. Period. Full stop.

And you know what makes this scene even worse? Barbara gives Bruce a well deserved verbal smackdown for this breach of privacy – but she’s a hypocrite, because we find out later on that not only does Babs have Nightwing’s place bugged, she included the shower! Oh, so when Batman bugs her work area, it’s a massive betrayal, but when she spies on her kinda-sorta-ex while he’s suddsing up, it’s all “Oh, get it girl”? No. As bad as this take on Batman was at the time, stuff like this reminds me of just how low Barbara is at this time too – she’s just as much of a uncaring, unsympathtic character at times as Batman, she just hides it better.

Neat thoughts! I’m usually a big fan of Dixon’s stuff from this era, though I have to admit that while I enjoy his BOP a lot, it is much less prominent in my heart than Simone’s run following. The adventures just feel a bit less thematic and character-driven, more pulpy. Still a lot of fun (unlike much of what followed Dixon and Simone - Moore, Bedard, Swirzcynski, etc), but a bit disposable, with a few really important exception stories.

Bard actually pops up quite a bit in Dixon’s Birds of Prey from my memories, but goes away when Dixon left, and didn’t come back till Batman Eternal, I believe.

I don’t agree that Dixon’s Batman or Oracle are uncaring or unsympathetic, but they are deliberetely flawed. But flawed in ways that I think are interesting and lead to important areas of growth. And I enjoy the similarities between the two a lot. Wish they’d write more of Batman’s Best Student Babs instead of more Millenial Hipster Babs. There was actually a hint of that early in Hope Larson’s Batgirl run, though it sadly faded too quickly.

These are my first ever issues of Birds of Prey, although I did watch the long ago tv show. It was fun to see Dinah and Babs starting off. I am much more used to seeing Dinah paired with Oliver Queen than with other heroes. I enjoyed the stories, although I felt Babs was too easily fooled about the political prisoner.

Dinah and Babs’s character stuff is the best thing about these issues. They are both so full of personality!

These are my first ever issues of Birds of Prey,

You should go back then in our reading clubs as we covered the various one-shots and other outings that lead to this first team ongoing!

First of all, love Oracle and love Black Canary. I have really liked Dinah in everything I’ve read of her so it’s cool to see her starring in this.

These are some of my favorite characters. I think Birds of Prey is a great series because of the interactions between Babs and Dinah. The superhero/spy stuff is cool too but I am looking for something more. Dinah is down on her luck at the beginning of this series and it is great to see her character grow into what we see in the Black Canary/Green Arrow series.

Same here. I didn’t see Babs or Dinah to be in their early 20s. Maybe early 30s.

Yes, I very much see Babs at least as about 32. Nightwing about 28.