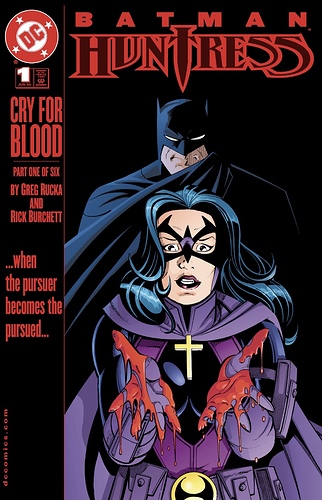 Helena Bertinelli (aka “Huntress”), known as a figure of vengeance, teams up w/ The Question to discover the secrets of her past in order to prove her innocence after she becomes the prime suspect in a brutal gangland murder.

We’ll take the first week (4/19-4/25) to read, then discuss during the second week (4/26-5/2). Did you enjoy it? Have you read it before? What did you think of the artwork? Anything about the reading you’d like to discuss—drop your thoughts below when you’re ready.

Cry for Blood is my favorite Huntress origin story!!!

This was one of the first Greg Rucka stories I ever read, too, so I’m looking forward to our club review.

I will try to get this in so you we have new thoughts on it as well as pasting the thoughts from 2020 that I will find after I read and type everything down.

I’ve loved this story since I ran across all but one of the issues in my LCS (at the time) in the back issue bin, about 6 or 7 years ago. I found the final issue on ebay, then bought the new trade of it when the Birds of Prey movie came out!

I also love this origin! Haven’t read it since high school. Also psyched because there are a lot of great connections in this one.

I was going to try to be less political in my posts, but then I realized The Question cameos in this one… so… there goes that…

This one has my attention. I think I’m the only one in this thread that hasn’t read this six issue mini. Looking forward to reading and discussing this, cheers!

Stories like these make me wonder why Bats is so hard on Huntress while easy on Jason. All Huntress wanted was a fair chance but I guess she technically blew it before in No Mans Land.

One day more until discussion!

Did you enjoy it? Have you read it before? What did you think of the artwork? Anything about the reading you’d like to discuss

I have read before and liked this origin story for Huntress. However, the art was bellow average but the first cover looks great. As for discussion, I was surprised to see the Question in this as I have read hundreds of Bat comics and this was one of the only two occasions I found him popping up. I wonder if anyone here knows if Huntress and the Question interact outside this story?

All right, time to go!

First off, this is MY origin for Helena. I like Year One, and I think there are elements from the 89 origin when filtered through Dixon’s miniseries in the 90s that clearly were compelling, but this elevated it to a magnificent part of Gotham lore.

I fell in love with Helena in Simone’s Birds of Prey - her arc from isolation to connection was truly amazing, and still stands as one of the great comic book arcs for characters, I think, and read this work afterwards. I think it’s really cool how Simone took the darkness and isolation that Rucka (and later Loeb and Beatty) set Helena on, and figured out a realistic, not easy, road for her to walk upwards.

Lastly, I hope people will check out The Question: Pipeline, which are backups to Rucka’s Detective Comics run featuring Batwoman (Huntress shows up about a third of the way into the storyline). And, of course, 52, which tells what happened to Vic after this beautiful, tragic story with Helena.

Rick Burchett doesn’t get enough credit - he’s perhaps best known for his work on the Animated Series tie-in comics (he did the phenomenal Brave and the Bold #13, sadly not on this service yet, featuring ALL of the Robins, including Steph, in a time travelling wacky adventure!), but his work here is simple but detailed, clean, poetic, and so deliberate. I wish he were better known and appreciated.

No, they do not in-universe. There’s reference to it in Rucka’s The Question: Pipeline series of backup stories I linked in my last power.

There’s also some Huntress and Question interaction in the Justice League Unlimited cartoon, but it’s a very different version of Question.

I enjoyed this reading a lot. As I mentioned before, I read it in high school, but didn’t remember too much about it. It sent me off on a lot of extra reading after I finished it. For instance, I was wondering why Babs seemed to hate Helena so much and… then I remembered… (see Nightwing/Huntress). I was also lucky enough to find a couple of Richard Dragon, Kung-Fu Fighter back issues in the $2 bin of a local comic book store. What I ended up focusing on was The Question, The Huntress, their similarities, and their choices following the time they spent with Sensei Dragon.

I’ll start with The Question. Most of my knowledge about The Question comes from his original appearances in the back-up stories of Charlton’s 1967 Blue Beetle series. The Question was created by Spider-Man co-creator Steve Ditko. Ditko was a devote believer in objectivism, and The Question was created by Ditko to be an objectivist hero. In fact, those '67 Question stories read more like objectivist chick tracts than they do superhero comics. Now… I’m not a fan of objectivism, so I don’t think I would be able to describe what it is without biased editorializing. Therefore, I will let Vic Sage give you a basic synopsis of what objectivism is all about: 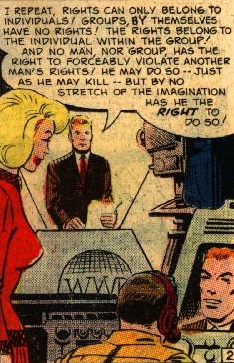 Ditko’s interpretation of objectivism also came with a black and white certainty to questions of good and evil. There was right and there was wrong with no shades of grey. If someone breached into wrong then they were a criminal. Once you are a criminal then you are a criminal for life, and you deserve what you have coming to you. Hence this scene (again from Charlton’s 1967 Blue Beetle #4):

The Question Why Tell me Your Problems743×351 144 KB
It’s kind of even more brutal than these panels suggest as The Question is the one who kicked them into the water.

My headcanon is that everything is continuity, so The Question from the panels above is the same Question from this story. It’s also the same Question that learned under Richard Dragon in The Question (1986) #2. Vic’s breakthrough moment came after Richard told him a story about a philosopher who dreamt he was a butterfly and then woke up to wonder if he was a man who dreamed he was a butterfly or if he was a butterfly who now dreamed he was a man (hence why Dragon refers to Vic as “butterfly”). In my headcanon, this story is the perfect challenge to the certainty of Vic’s objectivism. After his time with Dragon, Vic came out a calmer, more understanding vigilante which is how we find him in this story.

What does all of this have to do with our girl Helena? Well, to start I could see some similarities between objectivism and the Sicilian concept of omerta as Helena describes it in issue #1: 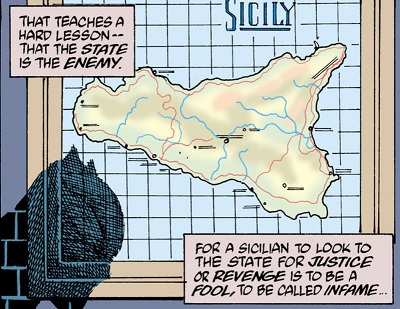 The Question’s refusal to save the criminals in the sewer also reminded me a lot of how Huntress dealt with Mandragora at the end of Huntress (1989) #6. Therefore, it’s not surprising to me that Vic saw a lot of his old self in Helena and decides to take her to his old teacher for help.

Unfortunately for Vic, Helena didn’t exactly have her butterfly moment. The best she can do to explain why this is, is by telling him: 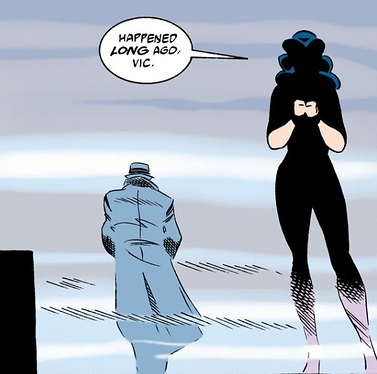 What I think she’s trying to say is that she can’t change. The things that happened to her as a child, losing her family, already changed her permanently. Those things that happened long ago caused her actions today, so they may as well have happened years and years ago. She is certain there was nothing she could do. It was already done.

Circling back, as I mentioned before, I am not a big fan of objectivism. It is almost the complete opposite of the the things I believe in. That being said, I’ve always seen a kindred spirit in The Question (Steve Ditko) because of his stubborn, self-destructive, uncompromising beliefs. I feel the same way about Helena and that burning rage that gnaws at her very center until almost nothing else is left. That… makes me worry…

I’m hoping that one day I’ll wake up wondering if I’m a moth dreaming that he is a man… and that I’m not certain of the answer.

Lastly, I hope people will check out The Question: Pipeline, which are backups to Rucka’s Detective Comics run featuring Batwoman (Huntress shows up about a third of the way into the storyline). And, of course, 52, which tells what happened to Vic after this beautiful, tragic story with Helena.

Thanks for the Pipeline recommendation! I will add it to my list since I’ve been reading DC’s Question stories lately. I may also revisit 52 since Cry for Blood also got me thinking about it…

Very interesting thoughts! I like the connections you make between Vic and Helena’s backgrounds, though Vic has a LOT of Zen in him by this point thanks to Denny O’Neil and Denys Cowan’s series.

Awesome! If you do like Pipeline, give me a tag in a thread somewhere, as I’d love to hear your thoughts!

Vic has a LOT of Zen in him by this point thanks to Denny O’Neil and Denys Cowan’s series.

About that… Denny O’Neil actually worked with Steve Ditko briefly in 1968 on Beware the Creeper. Rumor has it that their working relationship did not go well due to Ditko’s devotion to objectivism and making sure it was portrayed in his work. If these rumors are true, I’m wondering if that influenced Denny’s Zen-Buddhist makeover of The Question. Because I’m relatively sure Ditko would not have approved…

I don’t know, honestly - I enjoy the Question okay, but neither the Objectivist nor the Zen version appeals to me quite enough for me to do a lot of background reading. But he works beautifully here and in 52, for sure.