Hey all DC has had a long history
And while a lot of that history has been really great, some ideas were…well, less so.
This is a thread I’d like to dedicate to DC’s entire history of…well, getting it wrong!.

Now I know many would like to use this as an arena to stick certain editors etc in the punching bag and go to town on them.

But that’s not really the intention here. Instead We’re here to look critically at how a situation was handled. (be it a character’s death/replacement/allegiance turn. And see why it was done who it was done to. and how could it have been done better.

Hopefully, we can all come up with some creative ways to get through the problems DC had over the last few decades and maybe inspire future writers and editors with some solutions to future problems that come up. (and maybe avoid some of the mistakes that were made from being repeated)

For Starters, I’m going to select the story that brought me into the DC Universe Full-time

A Death in the Family.
DC had decided to kill off Robin!
Not the original Robin, Dick Grayson, but Jason Todd the second Robin. Jason Todd had suffered the indignity of starting off as a carbon copy of Dick Grayson. a Circus kid who was orphaned when his parents were killed by a gangster. Jason was originally a Redhead but when he was given Dick’s Costume he colored his hair black.
Jason also had the bad habit of mangling expressions. (whether he was just getting them wrong constantly like Biff Tannen or doing it intentionally in a lame attempt to be funny, no one but the writers know for sure)
At any rate, Jason’s origin was revised after Crisis on Infinite Earths and he became a moody street thief who boosted the tires off the Batmobile. Had an unhealthy anger-management problem when it came to Two-Face. By this time, Jason’s expression mangling turned into a tendency to favor groan worthy puns.
The late 80s saw a Boom in the 1-900 phone number Polling and entertainment calls were the main uses. Many were for kids to phone in and listen to stories or soundbites from famous celebrities or fictional characters while others were used to allow audience participation.
(One such notable use was when Universal’s Television show The A-Team, used the service to determine whether Face Man (played on the show by Dirk Benedict) had actually found his father) DC had been trying to find a way to use the gimmick to affect a storyline. It was decided that killing off a not so popular character (or offering the fans the decision) would be the hook and Jason Todd was the unlucky character chosen.

Now. frankly, this was the worst decision DC could have made.
The 900 number was quickly becoming regarded as a stunt already. Also, the higher cost (over the toll free 800 numbers that were often used to sell products ) was a hit on family’s with children who wanted to hear the advertised characters and celebrities.

As to the Death of Jason Todd…
Well, that could have happened anyway. For one thing, a Major motion picture was looming on the horizon and Robin was not ultimately going to be shown or even referenced in it. (And DC even back then was given to keeping it’s characters in-line with their mass media market interpretations.) So Batman would find himself quickly without the laughing kid sidekick regardless of who was pulling the trigger. This of course would lead to Batman becoming Darker and grimmer which would tie into the mood of the upcoming film. (compared to the old TV series)
As to the story of Jason Todd’s death as it was actually ultimately presented, I really have no problem with the way it was set up or told. Jason’s downward spiral may have been a recent development with a writer on the book who didn’t care for the concept or character, but it at least led to what can at best be considered a logical conclusion. And the aftermath and following stories helped sell Batman as a Dark Loner figure with Alfred as his only real sounding board. (perfect for the time of the Movie.)
At the same time. seeds were already being planted for a newer and more improved Robin to hit the stage once the movie mania had run it’s course.
So what could have been done better?
Well, they could have just bitten the bullet and killed Robin off. That would have at least been an honest decision rather than a cop-out by saying…“We didn’t kill the kid! The fans did it!” And that leads to the second part of why they shouldn’t have bothered with the 900 number. The easy exploitation of the system. Ultimately one fan rigged an auto dial on the “to-kill” number and boosted the numbers way over what they would have been normally.
(I kind of wonder if there was a similar fan who wanted Face Man to find his father on the A-Team)

Well that’s all for now. What do you guys have to add? Is there something you would have done differently with a Death in the Family? Or is there a storyline or character shift/replacement that you’d like to point out as being handled badly?

As the head of the Jason Todd Book Club (part of the Renegade Robins Club), I should probably chime in. I’m not convinced that the 1989 film necessitated the death of Robin. In fact, another Robin was introduced later that same year, and he was named after director Tim Burton! Obviously, DC thought there was still a market for the Boy Wonder.

The plan with “A Death in the Family” was to bench Jason for a while, assuming the vote didn’t go the way it did. If that had happened, then things would have probably played out pretty much the way they did in the 1990s, with one exception: Robin would have a different name. Jason’s personality was rather malleable, anyway, so we probably would have seen him in a spiffy new costume hanging out with Spoiler and scolding Jean-Paul Valley for getting too rough (perhaps talking from experience on that front?).

Honestly, The worst thing about Hawkworld was that when the ongoing kicked in, they set it in the post-Crisis/Legends years rather than have them make it contemporary with the Justice League’s Post Crisis Secret Origins story so that Katar Hal and Shayera Thal would have arrived as the League was first forming. then after the initial arc. Have them do a fast forward to current events.

Marv Wolfman depowering Wonder Woman.
His heart was in the right place, I get why he did it. However, it was the single biggest slap in the face to a member of the trinity and an icon to the feminist movement. WW in all her star spangled glory was on the first cover of Ms. magazine for a reason.

THIS. All they had to do was just say the first arc or so of Hawkworld was a PREQUEL a’la “Batman: Year One” or “Man of Steel,” and everything would have been fine. They could have had both Golden Age JSA Hawkman in WW2 and Silver Age alien cop Hawkman in the present, and the worst that would have come from it would be readers making jokes about the similar names.

Be prepared. This is a rant.

“De-powering”? I thought he gave her powers a boost. I mean, I’m no expert on her speed and strength , but I do recall she gained the power of flight with the reboot rather than have to rely on an invisible plane.

I could’ve just said “New52 and all the retcons since”, but CaptThunder001 already beat me to a “no explanation needed” post. So I wrote this.

You in the back! Stop crying!

The Eternal series. A pair of “anniversary” cash grab stories that never really delivered on what they promised. Batman Eternal hardly got into the inner workings of the Dark Knight, no more than a hundred other writers before, and Batman & Robin Eternal didn’t delve into why Bats needs a sidekick. Whereas the first had a subplot or two that could’ve been removed without really losing anything, the second ramped up the unwarranted praise for a character that is nothing special. Several heroes retconned into being dumbed down or infantilized versions of their pre-Flashpoint selves, all so said unremarkable character can appear necessary.

Important character journeys are skipped. Growth is overlooked or thoroughly ignored (later we’re just expected to believe it still somehow happened, I suppose). A brat is worshipped for no organic reason, by characters that used to be capable. So many unanswered questions, plot threads dangling, bewildering nonsense in place of substance, all covered up by bad poetry and any excuse to make characters cry. This was not “just the same” as the originals–this was a travesty posing as storytelling. They claimed there was something more to these stories, when it was just more reboots and retcons after years of readers insisting they didn’t want more. Seventy-eight issues of lies. [shakes fist angrily] 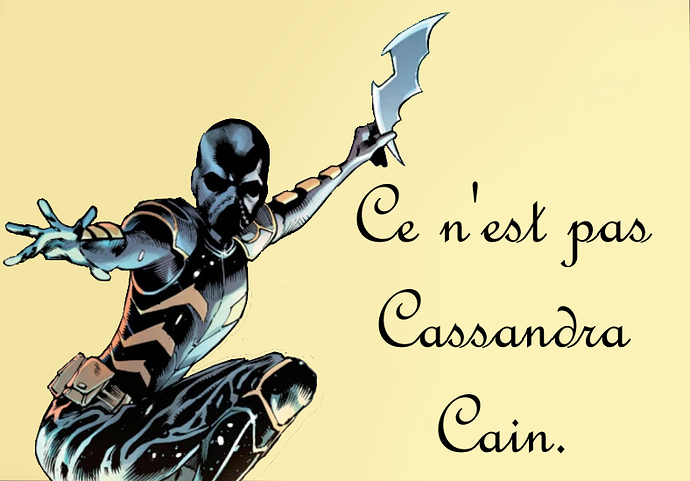 Fix them? To be honest, I can’t think of anything in these stories worthy of salvage. They did more harm to involved characters than anything else, and were at best an easy way for DC to cash in the anniversary years for the Dynamic Duo. The story gets so many characters wrong with only a few basic similarities to trigger nostalgia.

However, it could be workable if you essentially make it Flashpoint-free. Remove the magical stuff beneath Arkham, have Stephanie Brown already having a long career as a crime-fighter, Cassassandra (Black Bat) is out of Gotham for most of it, keep both girls’ fathers alive, Cain is not a brainless, drooling clod intent on killing Cass all the time, no Orphan identity junk, and if you want to “explore” characters–actually put in the intellectual work of exploring them. Otherwise, don’t try and sell it as something pivotal and essential in Batman or Robin’s history, because none of it was; not remotely. Harper is either removed completely from the equation, or gets written like an actual unique character, not the author avatar of a self-indulgent fanfiction.

I actually have an idea for a more detailed way I’d rework the Eternal books, but that’ll be an editorial on my channel for another day.