Right if you see this, you probably clicked this link despite the spoiler warning, so now we all want to be here.

Supergirl gets her final issue with issue 42. 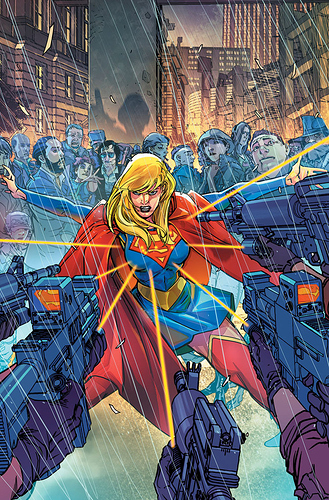 Do do believe a girl can get cancelled?

Is she making a noble sacrifice of herself in the final issue? I don’t see that working well with the President Supergirl future we have been teased, but then again, when they wrote that maybe they thought that Infected Supergirl would sell better. Continuity… always changing it is.

Another option: Maybe this is the end before next gen and next time we see her is as President Supergirl in in gen 5. The problem I see with this is that she never got a solid foundation in Rebirth as DC threw her around as a crash test dummy into other arcs. Is it wise to move on without a solid foundation and a surrounding cast?

I have seen suggestions that she be moved to Wonder Comics as a better fit as DC has gotten too dark to fit her profile. This could be a good suggestion, maybe the best of the options?

Is she just faded out into obscurity for another 20 years?

Some suggest she should join a team book instead. There are many voices wanting her in the Legion again. Maybe that could be a future?

Whatever her future I hope that we get a proper Supergirl back some day. Let this be the end of angry/evil/infected experiments and I hope the next Kara don’t have to deal with that.

For now I’ll be slipping away from the comics aspect of DC for a while. I had that personal rule about balancing my reading, and even though Superman is going well right now, I’ll be dropping that too when Supergirl is cancelled until her representation is restored. That leaves me with an empty DC pull list most of the weeks now. I’ll still be around for the shows and discussion though.

What are all your thoughts? What happens in the future for Supergirl? What would you like to happen?

Did you see the cancellation coming? Was her comic doomed the minute they turned her dark?

That’s sad. I was starting to enjoy it on the service.

I think it’s sad too.

I hope it is just a short break while they figure out a way forward for her and a writer that fits her. I think they are so far off track now that they need a relaunch anyways.

Huh…funny; today I reinstated my Comixology subscription to Supergirl and purchased the few issues I missed. Wasn’t that interested in infected Kara. Took a little break and then I decided to dig back in after dropping it for 3-4 months.

Too bad it’s going away. I liked Andreyko’s run. Was a nice space adventure.

The chemistry between her & Jon was really cool, imo. Wouldn’t mind seeing them team up

I would love a Jon/Kara teamup too.

I wish we had gotten some Kara/Jon issues when he was kid. It could have been a fun dynamic for a series. Just as Kara was sneaking out against Kal’s wishes in the animated series, we could have had Jon doing the same to Kara when she is babysitting.

Coville, you’re our resident Supergirl Superfan. What direction would YOU like to see in a solo title?

Orlando had the general right idea. Give her a family, a set of close friends. She is one of the few younger characters - give her the high school environment as home turf. Team her up with Babs more often - both characters shine more in their teamups. Give her a closer relationship with her cousin and Jon. Restore her connection and friendships with the Legion. Even if Jon is the main super in the Legion title, send her away there once in a while. This will make the universe seem like a living breathing world, and not isolated sandboxes.

Give her more new villains that have a closer bond with her, but always let villains from other galleries in as well. Once again, living breathing world and no sandboxes.

One exception, sandbox her from DCs darkest. BWL and Kara do not mix. BWL is grounded in an unquestionably adult lifestyle. Supergirl is not an adult. It is messed up and shouldn’t have passed editorial.

Always remember Kara’s core: Hope, help and compassion for all. She is one of DCs beacons of light. You wouldn’t turn main universe Batman into a cowardly weak guy with fear of heights for 6 months, don’t turn Kara into her opposite of herself.

She inspires people, they seek her for comfort. She is not a source of their fear.

She remembers Krypton. She lives with the loss of her planet. It is a source of grief, but it is also a source of happy memories and a childhood that gave her the values she brings to the new world. Explore her past on Krypton often as memories. There is an infinite amount of lore there waiting to be told, and it’s all hers to explore. It is a huge part of what makes her different from her cousin. Krypton’s destruction is not fuel for vengeance, it is fuel for her protective side.

That’s kind of the direction I would want.