what are the best runs of ongoing Comic book titles from DC Comics, Marvel, Image, Darkhorse, etc, so here are personal top 10

I do with the Denny O’Neil/Neal Adams run on Green Lantern (also known as Green Lantern/Green Arrow), Steve Englehart’s 1977-1978 run on Detective Comics, the Alan Moore run on Swamp Thing, the Grant Morrison run on Doom Patrol, and Geoff Johns’s run on JSA.

There are so many great runs. Here are few of my favorites.

Not sure about the best but definitely one of my favorites: Punisher MAX by Garth Ennis

I personally love the Claremont/Sienkiewicz run on New Mutants. The best DC stuff is already listed.

Edit: Didn’t note the etc. In that case my favorite Image title is The Maxx. Short series.

Brian Azzarello’s new52 Wonder Woman run was/IS the best run that character ever had, absolutely loved everything about it. The darker,more serious tone, her more familial connection with the gods, the mafia-style politics of Olympus, and her supporting cast of characters; Zola, Hera, Strife, Hermes, Orion, and even Ares. And Diana herself was far stronger, more confident, and a lot more self-reliant than any of her previous incarnations and fought for every scrap of respect she got.

There were just so many moving parts going on, so many different factions amongst the Gods themselves vying for power and forming alliances, and even hints at New Genesis being involved in some way, that universe that Brian Azzarello created had infinite possibilities, and was the MOST interesting & compelling that Wonder Woman has been in forever. Too bad DC editorial never saw the potential in that, and stupidly retconned everything again in Rebirth.

This is a great topic. I could probably go on forever, (50 plus years of reading these “four color” wonders) but I will keep it to ten for the sake of brevity.

Oh thank u, u reminded me I forgot.
WW- Greg Rucka .
Tons more I’m forgetting I know it. I’ll say I’ve never read a bad Freedom Fighters & love Jurgens run on it, I love every run of FF tho too, or, Uncle Sam & the FF if people wanna get picky on the older ones. O.Neil & Cowan’s The Question & John’s Stars & Stripe come to mind too b4 I exit for good.

Okay, I’ll pick 10 of my favorite DC runs, and will probably regret leaving an important one out later:

I regret leaving off some from every list on here lol. Also, I can never think of things for lists in the moment. They always come later. As far as DC that is. It’s just that my head is filled with so many DC related things that it’s overloaded. I regretted leaving Puckett out as soon as I saw yours & now that made me think of Kelley Jones see, it never ends.

Seeing Robert Kirkman’s name in a few posts reminded me of the book that he should be well known for: 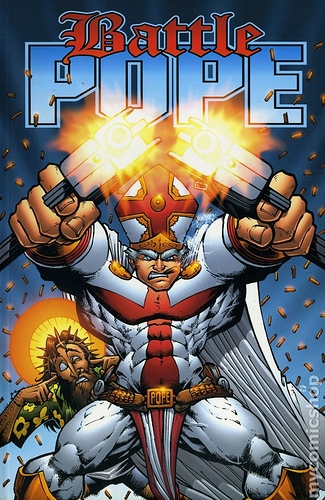 Battle Pope has one of the best taglines ever: