Post-Robin identities welcome of course. There’s a white and gold Nightwing design floating around the internet that I think with the right execution could be awesome.

Imagined/non-canon/made-up: How about the below action figure, Talon Strike Robin (picture courtesy of eBay)?

People always say Batman is prepared, but Robin was prepared for the Talons 14 years before the rest of us would come to know them. 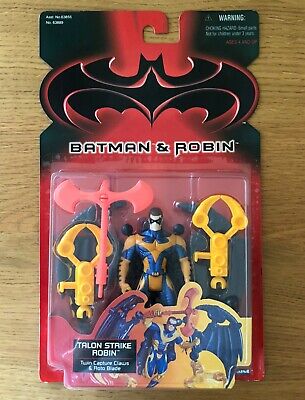 Counting Post-Robin identities, Nightwing’s '96-'09 Fingerstripe costume is a favorite of mine. And while I don’t like him very much, Jason’s initial Red Hood suit from his return is pretty snazzy. And there’s technically Steph’s Batgirl costume, since pretty much every Batgirl suit except maybe the most recent two has looked fantastic.

The only good Robin costume for the Robin identity is Tim’s Post-Infinite Crisis one that just ditched the green. The others are UGLY. I mean, I have a high tolerance for garish costumes (and indeed, I refuse to accept Batman costumes with insufficient quantities of blue and yellow), but those colors do NOT work together.

Except for the yellow crotch that action figure is pretty great

The guy above nailed it. Tim’s post Infinite Crisis costume was a perfect Robin costume. His reasoning behind it makes sense and it made a turning point in Tim’s career as Robin.

There’s a rainbow batman, but robin has plenty of color, so what about an all black number?

My three favorites are the 1940 original costume (not so much by the 1970s when Dick was too big for it), the 1997 movie costume, and Damian’s costume.

The black and blue Nightwing, and the pre-flashpoint Tim Drake uniforms.

@Knox Admittedly Damian has a pretty good outfit. Kind of funny when you think about it, but it looks good.

I liked the cape that doubled as glider wings for Tim. I miss those. And my favorite Nightwing was black and red as opposed to black and blue