Least favorite… I may agree with you on Justice League. Bryan Hitch’s run never really clicked with me.

I made my own thread with my ranking of all 2016 Rebirth titles, so I was going to double check it, but THE FREAKING SEARCH OPTION WONT WORK TODAY, so I guess I wont do that. I love the content on DCU, but the bugs are getting reeeeeally old.

Anyway, I think I ranked Batman at the top, but having now having read some more titles, I’d have to consider putting Action Comics, Superman and New Super-Man in that same category. Anybody who passed by New Super-Man missed something special.

In last place, I’m pretty sure I had Blue Beetle. It was poorly structured, unfocused, messy and cringy. Super bad. Second worst I think was Harley Quinn. I don’t get modern Harley Quinn. So many jokes with so little humor. Superwoman was also incredibly bad. An unlikable protagonist if ever I’ve ever seen one.

I agree Justice League was mediocre at best, but I didn’t seem to hate it as much as you.

Superman, Action Comics, New Super-Man were the best Rebirth titles out the gate.

ohh… and my least favorite was Superwoman. I was excited for that title at launch, but I seriously had to push myself to make it through the first arc.

Favorite: a tie between Superman and Action Comics.

My favourite was Green Arrow, because it was the first time in a very long time that Oliver Queen looked, sounded, and acted like the character I knew. New Super-Man was another favourite, because I’m a sucker for rookie heroes (especially ones living up to a legacy). On the Bat-front, I love Tom King’s Batman and I enjoyed the first couple arcs of Detective Comics.

I guess my least favourite would be Blue Beetle, if only because partnering Ted Kord and Jaime Reyes should have been amazing and it ended up being pretty meh. Oh, and I didn’t like Batgirl & The Birds Of Prey but really didn’t like the whitewashing of Helena Bertinelli who had been consistently depicted as a black woman in Grayson.

Was Bertinelli whiteified? I assumed she was still black and just light skinned? She was white up until the New 52 rebirth era though I guess the reboot gives an opening for that. I’ve never completely understood if Rebirth was supposed to be a continuity reboot or not.

Just flipped through some Batgirl and the Birds of Prey. She’s consistently drawn as darker skinned than Barbara and Dinah, and she seems to have the same shade as she had in Grayson, so I’m not sure what you mean.

@Batwatch It’s inconsistent at best. In some issues she is darker skinned than Dinah and Babs (sometimes barely), but on the cover for #4 there isn’t a real noticeable difference. Sure, it’s not as bad as it was with Connor Hawke, but it still bothers me. 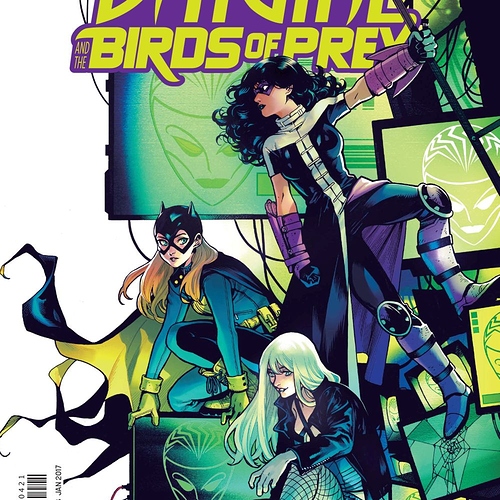 To each their own, I suppose, but it seems well within the realm of artistic interpretation to me. Since Grayson, she’s consistently been a light skinned black lady, and that holds true in BoP.

I agree with your other picks of best and worst Rebirth titles. I only read the first arc of BoP and decided to follow mother books, but I quite enjoyed it and have wanted to go back to it.

I know this is going off topic… but Huntress has always been depicted as Italian or Sicilian. I don’t get where anyone took her depiction in the Grayson series as being black. Artistically they decided to give her heavy Sicilian features to distinguish her from the the Helena Wayne version of Huntress who was also running around DC continuity at the time.

Her ethnicity was established in the Grayson series. Plus her last name is BERTINELLI.

p.s. It took me a while to check out the Batgirl & the Birds book, but when I finally did I enjoyed it very much.

Surprisingly, New Super-Man was my favorite Rebirth read. Questionable concept but executed to a T

From a previous thread

Just scrolled up in the thread. @Vroom; not judging or anything, but what didn’t you like about Nightwing? The second arc of that series, Back to Blüdhaven, might just be my favorite Nightwing story. Although I will agree everything other than that is maybe an 8/10 at best, and a 5 at worst.