Best interpretation of the Dc universe

What do you think is the best interpretation of the dc world and it’s characters in general. Preferably includes more than one character.

The Animated Series Universe. This includes:

I would say the best Interpretation of the DC Universe is the TimmVerse Animated Universe.

It started with the Batman Animated Series and that is considered to be the best or one of the best animated series ever. That series captures the essence of Batman and Robin so well.

Then you had the Superman Animated Series which is also one of the best animated series out there.

Then you had Batman Beyond what was a different type of Batman but was equally as good.

Then Static Shock. This is a favourite of mine as it was one of the more realistic superhero cartoons and dealt with issues that even now are still relevant and relatable to.

Then you had Justice League. This series brought 7 heroes (Batman, Superman, WonderWoman, Green Lantern (John Stewart), Flash (Wally West), Hawkgirl and Martian Manhunter) together and oh my it was wonderful. This version of the League is still my favourite as every character was portrayed to be as important as the others and they all had their moments to show how powerful they are.

Then Justice League Unlimited came and it got even better with the team expanding with almost all the known secondary heroes joining and every episode took a new hero on a journey and it introduced me to the Question and he’s been a favourite ever since.

Also you had the TimmVerse crossovers those were great. 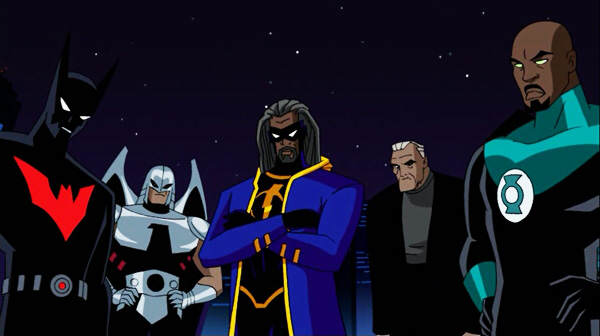 There are many, but I like the DCAU the best. Tremendous amount of tremendous talent behind and in front of the cameras.

Bold & Brave for lesser known characters.
Justice League & JL unlimited for classic comics portrayed on tv
Young Justice for a twist of characters assuming other identities and roles etc. i.e.Artemis Crock as Artemis the archer & as tigress as well as being the kid of sportsmaster and huntress, plus sister to Cheshire. Zatara assuming Dr Fates or should say Nabu.

YJ is realllllyyy good. But the dcau was awesome with the Justice league

The DCEU/Snyderverse is the pinnacle of all things DC.

The Snyder verse is the best DC has to offer it sucks that WB refuses to invest in it. Or at least come out and decide if they are keeping it or not.
And why aren’t any of the current t.v./movies on this app? Dose any one know? The books are good. The animated movies are great. But the selection absolutly sucks. They should just call this the canceled d.c.u. …C.D.C.U. when I paid for this scervice it claimed " one stop for All things D.C. " So I pay for it and what did I get? A few animations, a hand full of comics and a ton of sh#t that nobody has cared about for 30 years. And why the F… did Amizon prime members get to see Aquaman early? Why not D.C. fans? Shouldn’t we be getting the small rewards? Seems to me that this is just ANOTHER D.C. failure. Here is what I would like to see happen. (1) justice league Snyder cut. (2) a lot more comics to choose from. (3) more animated movies. (4)arrow verse / black lightning. (5) Snyder verse movies. (6) full season of exclusive shows released for binge viewers. Not spoon feeding us one episode at a time. (7) early access to movies and bonuses should be offered to us first. Not Amizon. Not Netflix. Not Hulu. But to the loyal D.C. fans. Please just add more comics and I won’t feel so ripped off.

@jhnjohnson… I think you misunderstand the “all DC” part, show me something on this site that isnt DC. Everything here is DC comics related. Its a subscription service, not a box set collection. You extrapolated the description of the service into something that frankly makes zero sense from a business standpoint and there is no basis for comparison for you point at and say “like that subscription service does over there”. Netflix, Hulu, and Amazon all offer subscription services for video media (movies and tv) but aren’t limited to a brand like DC or Marvel. All movies and TV are up for grabs for these apps, so they are only offering a handful of movies when compared to how many movies exist throughout all time and history. On top of that they offer no comics, have no exclusive featurettes on their content, no community, no daily content, no daily news program, and no contests.
Comixology revolves around comics AND you have to pay for them individually. Netflix revolves around movies and tv with nothing else, DC Universe revolves around the DC brand and its fanbase. For DC fans, it’s all killer, no filler
Also pretty important, DCU service is ONLY in USA and DC fans and movie fans are global. Licensing deals are typically done well before a movie is released on video and usually is for a set amount of years. So, if DCU wanted to have Justice League on this app exclusively, that would have meant holding off on making any deals with Wonder Woman on a global scale until DCU app is itself global. So any fan or movie goer outside usa would have the choice of full price or rental, for years on end. Sadly, the result would be that all the CW shows and the films end up heavily pirated on a global scale. WB/DC makes little to no money in this scenario. Best to just take the payday from Netflix, Hulu, ect and allow them to show DCs stuff roping in new fans and potential DCU subscribers, while using that money to fund their exclusive DCU content.

God I wish we could edit posts. When I mention Wonder Woman in that last sentence, I meant Justice League again, lol

Oh yeah, as far as best interpretation of DC’s mythology, I give it to Young Justice. I feel like Snyderverse was probably going to be the best until studio interference genericised them to meet the expectations of casual fans.