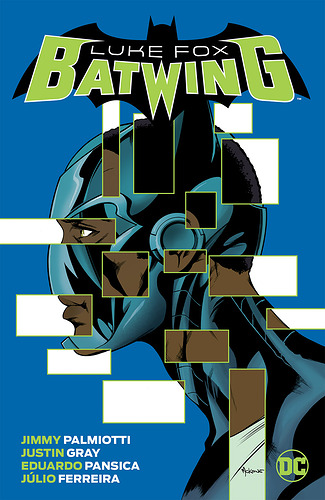 Lucas Fox is having a bit of a moment. As a mixed martial arts fighter, tech business magnate and one of Gotham’s few flying superheroes in his cutting edge batsuit, it’s easy to see why. Luke is the wealthy and powerful Fox family’s favorite son—and one which New York City’s Batman, Luke’s own brother, has a long shadow to rise above. Comic readers have been getting to know Luke since he first appeared in 2013. Animation fans first saw him on screen in 2016’s Batman: Bad Blood. And DCTV viewers have been forming their own ideas on Luke as portrayed by Camrus Johnson on Batwoman. But who exactly is this favored Fox son, and how does he figure into the larger Bat-Family dynamic? We’re here to give you the rundown and shed some light on his past partnerships in crimefighting. 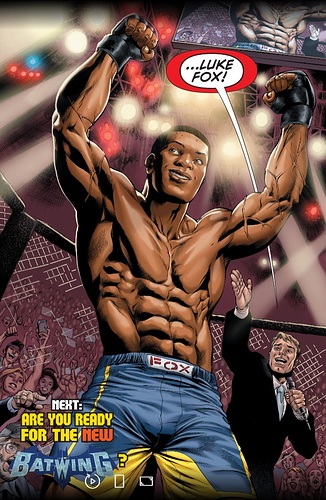 Just as Jace Fox has become a Batman of his own, Luke Fox wasn’t the first Batwing. That title originally belonged to David Zavimbe, a Congolese crimefighter funded by Bruce Wayne’s globalized “Batman Incorporated” initiative. After David hung up his cape, Bruce sought an ally closer to home to help finish the fight that the first Batwing started against Africa’s vilest super-villains. He found his new Batwing in Luke, a competitive fighter and brilliant engineer in his own right looking to make a bigger difference.

With a Batsuit designed by his father, Lucius Fox, the mantle of Batwing came with stronger armor, more advanced combat and detective technology, and even powered flight. After putting away the likes of Lion-Mane and Lady Marabunta across the Atlantic, Luke returned to his home city, where he found his legs as a Gotham crimefighter against more established underworld figures like Lady Vic and Ratcatcher. He also made a few enemies of his own. If Batwing could be said to have a nemesis, it would be his own childhood best friend, Russell Tavaroff, who after years of bullying and drug abuse became the “Snakebite” super serum-empowered villain, Menace.

To read more about Batwing’s incredible moments, head over to DC Comics!

Are you a fan of Batwing? Let us know in the comments below!

I love Luke! Kinda wish they’d used him for The Next Batman instead. But I can hope he’ll come to prominence again soon!

I love Batwing! Personally, I prefer David but Luke is still great!