Batman: The Long Halloween and the Tragedy of Harvey Dent (Spoilers!) 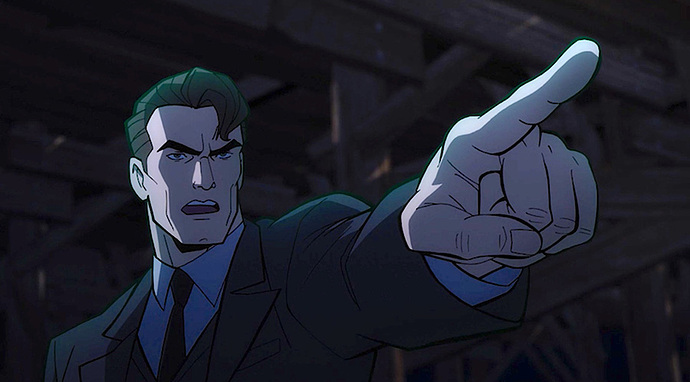 At the beginning of Batman: The Long Halloween, Part One, Batman, Jim Gordon and Harvey Dent stand on a rooftop and pledge to work together to take down the mob. By the end of Batman: The Long Halloween, Part Two, the three men have reunited on the rooftop, but their partnership has been fractured. Harvey Dent’s face has been permanently scarred, he’s given in to his dark impulses and has become the criminal known as Two-Face. The tragedy of Harvey Dent is something that has been explored many times in Batman continuity, from the Golden Age comics to Christopher Nolan’s Dark Knight film, but this story puts another spin on it.

The tragedy of Harvey’s downfall is bigger than one man going bad—it’s about what Gotham lost. We’ve seen how much good Batman and Jim Gordon can do for the city when they work together. Imagine how effective they’d be if Harvey Dent had remained their third partner. Batman handling things in the shadows, Gordon leading the cops in the streets, and Harvey Dent prosecuting the criminals they brought in. Think of what they could have meant for Gotham.

To read all about the downfall of Harvey Dent, head over to DC Comics!

Have you seen The Long Halloween: Part 2? Let us know in the comments!

Have you seen The Long Halloween: Part 2? Let us know in the comments!

I have, and to paraphrase Elaine Benes, “It was good.”

I enjoyed the Long Halloween movies (which I’m sure will get an all-in-one, edited together release at some point).

I would have enjoyed them more had they mirrored Tim Sale’s art (this is true for any of the movies based on specific storylines, and one of the reasons why I love the Superman/Batman duology so much), but other than that, they were a very good adaptation of a very good story.

It was very good. Deviated from the comic in a number of respects, but mostly for the better. I have to say, the silver age Blue Beetle short that accompanied it was pretty fantastic, as well

Any word on when this will be on HBOMAX ?

I’m sorry, we don’t have an update on that currently!

That was such a good back to back movie. I have to admit that half of me wanted him stay as Harvey Dent while the other half wanted to see him Two-Face. I think Long Halloween has help make Dent popular, by exploring the character before he becomes a villian.
Harvey Dent is a tragic character, you just can’t help but liking him even knowing he could be Two-Face at anytime.
The Dark Knight really put Dent in the center of the film, we’re rooting for him til tragedy struck when he Lost Rachel and half of his face burn.
I hope in a future we see more story on Dent. Surprisingly story on villian’s history can be interesting like Joker (2019) and Venom.

My guess would be there’s a fair amount of repitition when viewed back-to-back. At this point, though, I’ll happily take a film whose problem is being too long, as opposed to one where the plot is insanely crammed into a short running time.

One change they made from the comic will pretty much rule out any “Dark Victory” sequel. That seems like a decision they may regret.

Would Have Had Calendar Man as the Killer!
He Makes More Sense!