Now, will you be reading it first thing after midnight, or sometime 24 hours from now?

Also, spoil the hell out of it, because I most certainly will after I’ve read it (the thread has a spoiler notice in its title, afterall).

Definitely not after midnight; I’m snoozing by then. I do my reading sporadically throughout the week. Will come here once I get to it

NGL, when I mosey into yon comic shoppe tomorrow, I just might indulge my inner-Ash Williams and say “Come to papa!” when I see WF on the shelf in all of its glory.

I might read the whole thing in the store too, but as Marge Simpson once said, “You shouldn’t do that.”

Not sure it I ever saw you this excited about a new comic before, Superman or other… and we’ve been yappin’ on this site for what, 3 years now (man time flies)?

Enjoy it, brother! I’ll (virtually) be there with you, and look forward to the gushing afterwards

Oh, I’ve been excited about plenty of books since we’ve been a-chittin’ and a-chattin’, but given how this title…

…it has a lot going for it.

Plus, its a new monthly starring the GOAT, which is always cause for nerd shivers of joy.

You know what? You’re right about all the above. I’m gonna jump on your bandwagon and get all hyped up with you!

Not gonna lie, a part of me was a just a smidgen bummed that Gene Luen Yang and Ivan Reis’ run got cut short. The few issues they did were pure gold, in my opinion (which reminds me I need to pick up that hard copy).

I’m gonna jump on your bandwagon and get all hyped up with you!

This has nothing to do with the topic at hand, but I just came across it and it’s

Waid is doing an AMA on r/DCcomics on the 17th, if anyone wants to participate: 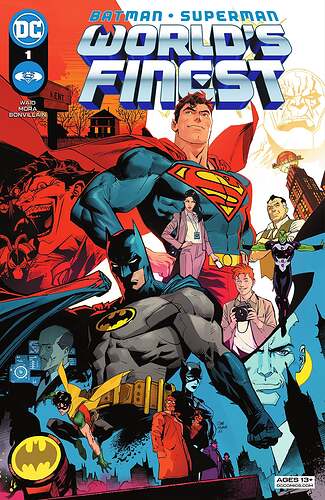 Groovy! Thanks for mentioning that.

Gene Luen Yang and Ivan Reis’ run got cut short. The few issues they did were pure gold, in my opinion

So turns out this week’s issues were made available to me at midnight eastern time, so 9pm here in California. I don’t recall this being the case before the Amazon switcheroo, so at least one good thing came out of that. So I read it, and it’s quite good!

The art by Dan Mora is fantastic. Very dynamic and detailed, even in the smaller panels. The issue is basically non-stop action, and it all plays out like watching a movie on the big screen. The classic costumes haven’t looked this good in a long time, with some interesting touches, like the black outline around Superman’s “S” or the inclusion of both pouches and capsules on Batman’s belt. Tamra Bonvillain’s coloring is a major star as well. Rich & vibrant and brings everything to life. They make clever use of lighting to differentiate between the different settings, especially evident when you compare the scenes in Metropolis’ broad daylight, and the red hues of the foundry fight.

The writing is not like anything I’ve read by Waid (granted I’ve only read Kingdom Come and Superman: Birthright). It reads like a 90s comic gone nuclear. The pace is frenetic, with nary a moment to catch one’s breath. The number of characters that show up is crazy. Aside from the main players, we see: Perry, Lois, Jimmy, Ivy, Alfred, Metallo, Penguin and… soldiers from Quard! The Doom Patrol! We also see Lex in his power suit and Zod & co, albeit as hallucinations. Then you have the mysterious villain in the shadows who is seemingly orchestrating the whole thing. It’s quite a lot to handle but, to be honest, Wade never misses a beat. When the issue was done, I was left with this feeling like I want more, in a very good way.

This issue doesn’t play the “Batman is brooding and Superman is hopeful” card. Instead focusing on their partnership and how well they work together and respect each other. Then you have Robin, who is not only an integral part of the action, but also provides some moments of much needed levity in the middle of all the sweet sweet chaos.

Superman falling under the random transforming effects of red kryptonite strikes me as very silver age-y. I don’t know why I say that when my silver age knowledge is close to zero, but the zaniness I hear about those older comics feels very much present here, albeit in a very modern 2022 type of way.

There’s some little throwbacks to the old movies and comics, like easter eggs almost:

It’s a lot, I know… and I didn’t even talk about the plot all that much. It’s clever. At first it seems like it can be a classic brawl between The World’s Finest & a couple of villains. Then we learn there’s more at play, with Ivy and Metallo made quick work of, and the shadowy villain happy with what they just started. I especially liked the way the Doom Patrol is brought in. The negative spirit keeping an infected Clark in check was, very unexpected.

Ok, lots of positives. How about negatives? Maybe 1 for me, and it’s admittedly a nitpick. Seeing the classic clueless Lois saying “Where’s Clark?” was a bit weird. The story starts with “The not too distant past”… and Lois not being in on Clark’s secret seems like it was ages ago. I mean she’s known since the early 90s and they’re married and have a kid together. I understand that comic book time can be very different than real time, but it’s not just that. It just feels a bit regressive to go back to explore that status quo, when the relationship has evolved so much over time. I’m chalking it up to the “fun factor” of that whole setup, and will attempt to enjoy it the same way I enjoy an older comic.

And I’ll use that as my segue way to say overall… and I can’t overemphasize this… this book is a lot of fun. It is very well served by the expanded number of pages, which is very necessary, given all that Waid has skillfully crammed in there. I hope future issues are just as long. Great start to what is hopefully a great, long running book.

Read it this afternoon- it’s everything I always hoped it would be, and I’m so excited to see what comes next!!!

I was already tempted to pick it up, and I think I just might now, given how everyone here seems happy with it.

Pick it up pronto! Good stuffs in there!

Picked up the first issue and while I’m not as over the moon about it as others are, there is potential.

Dan Mora’s art is incredible. If I’m perfectly honest, he’s doing the heavy lifting here. The way that Superman is incapacitated was deviously clever. I LOVE that the Doom Patrol is playing a big role in this story. I’m honestly surprised that we haven’t gotten a new comic featuring them considering their show has been such a success.

The main story so far is just…kinda there. The dynamic between Batman and Superman is nothing very new or done exceptionally better. Robin being there could add a cool dynamic but he’s really underused. There’s hints of a mystery villain pulling strings, but there’s just not enough presented right now to care.

But this is just the first issue, it’s very possible it’ll hook me in a couple of issues.

Acting the way
They did in the old days

If you don’t want to read all of that, here’s the main takesway-

“COMIC-BOOK DOLLAR SALES WERE AROUND $420 MILLION, A 16% INCREASE OVER THE PREPANDEMIC YEAR OF 2019 AND A WHOPPING 53% INCREASE OVER 2020, WHICH HAD MANY FEWER NEW COMICS RELEASES. THE COMIC-BOOK TOTAL IS HIGHER THAN ANY IN UNADJUSTED DOLLARS SINCE THE EARLY 1990S.”

Only DC’s higher prices per issue

Breakdown for February in number of titles sold:

Superman Son of Kal el, even with all that publicity, dropped from 49 to below 50

Flash Action Superman used to be in Top 50

Fans have only a certain amount of money

And they are using it to buy Batman, not books with unknown writers

Despite the quality of some of these books

I would take any DC related sales chart numbers with a grain of salt. Ever since they left Diamond, their sales numbers aren’t released, so all this sales chart stuff is based on projections.