I’ve been reading on the six month trade delay for many, many years. You keep talking about this comic, and I’m gonna have to reconsider.

I can be most persuasive when a situation warrants it, and for this book? Yeah, my ability to persuade is definitely warranted.

We can go to the comic store with @Green.Lantern tomorrow! You guys can pick up World’s Finest while I mosey around his store’s back issue bins and toy/collectible sections.

Math is a unique thing (that I often got 40 winks to, while in school

), as is meeting your fellow geeks.

? I’m almost always the only one in it when I stop by for the week’s new books of interest.

It gets busy on occasion, but more often than not, its quiet as a library and its rare to see other customers in the joint between the times I enter and exit it. This isn’t a bad thing though, because I enjoy having a nice, quiet and comfy comic store to myself as I peruse the New Releases section, the back issue bins and what have you.

Of course, Wednesday is probably their busy, busy day (as is the rest of the week), but I only read DC in singles and stop in on Tuesdays, so for me, New DC Comics Day is my busy day.

Also, the owner’s a really cool guy, so I count that as meeting a fellow geek.

Was a solid, fun issue.

Few cracks are starting to show for me, though. I didn’t quite buy Clark & Bruce “willing” away Hal’s ring. I understand that his willpower was weakened under the thrall of Nezha, but it still felt too easy. Also, in my head canon those rings have to chose their wearers and are somehow bonded to them. Seemed like a way to just generate a cool action moment, which it was, so I went along with it. Also, this is the most action packed series I’ve read in a long time. I love that, and I want it to continue, but I also would like to see some less hyper interactions between the characters. You know, character moments that also let you take stock of what’s been happening and allow the story to breath a bit. Maybe that’s coming down the pipeline.

The art is amazing; I could stare at it all day.

The art is amazing; I could stare at it all day.

Agreed. I would love to see a Dan Mora Poster Portfolio book (which, among other things he’s worked on, would feature an emphasis on World’s Finest) come along in the future.

If that book ever happens, I guarantee I’ll buy it, as I’d love to have some framed Mora art on my walls.

Still waiting on an Ivan Reis version of that. He hasn’t been as busy with DC lately as he’d been in the past. I wonder if he’s branching out or just reducing his output.

My hope is that he’s working on a super-spiffy post-Dark Crisis series.

I went back to check it out. It appears that when the ring ran out of power and Bruce & Clark separated, the ring was on Batman’s finger. I wonder if Hal is still possessed in his civilian state?

Also, here’s how I decided to reconcile this in my head. Hal was weakened, and it took the combined will of the two greatest heroes in the DC Universe to pry the power ring off his hand. Far as the ring choosing them, why the heck wouldn’t it choose those two? If anyone is “worthy” it’s Clark & Bruce.

I don’t know why I care about this so much

My hope is that he’s working on a super-spiffy post-Dark Crisis series.

I sure hope so. Post-Dark Crisis would be the perfect landscape to launch a new volume of Superman in, and we all know how much Waid wants to write his solo gig.

Music to my ears.

I really want that Superman series to make a triumphant comeback.

@moro Agreed, as I very much want a new volume of Superman.

I just hope its not at the expense of Son of Kal-El, as I’d like to see Jon carry on after Clark returns to Earth.

Granted, if Son of Kal-El gets the axe to make way for a Waid/Reis Superman, then yeah, I’d be okay with it, but I would like to see Jon carry on with his own legacy somehow, should his book have to end.

Agreed. If the Bat family can support 236 current ongoings, the Super family can do 3.

Give or take a few…just a few, though

), but here’s a look at the final cover for #5 (debuting on July 19th) and its variants, complete with barcodes, trade dress and the like.

A cover, by Dan Mora 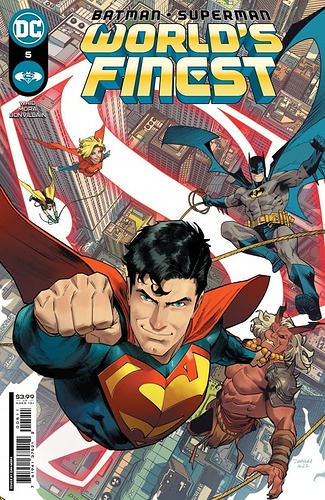 I love that one. The coloring, the position of the heroes and of course, Superman front and center with a hearty hold on Nezha. Williams’ Superman theme comes to mind when I see this one.

B cover by Francesco Mattina 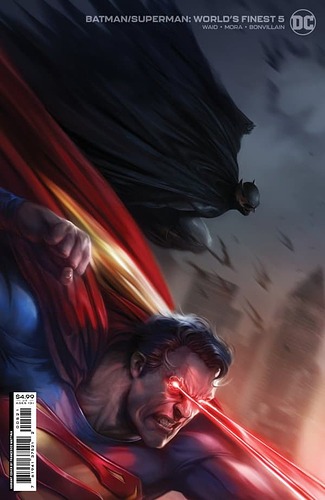 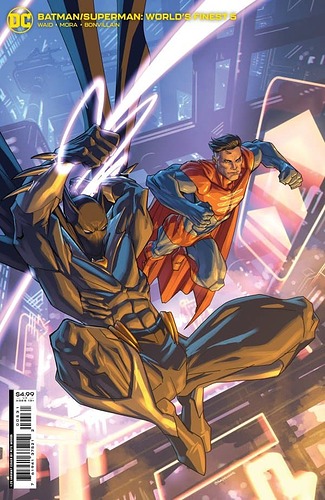 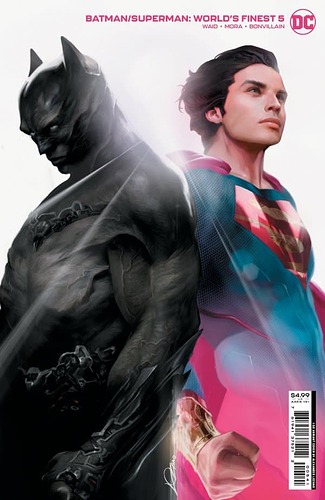 Paging @Bar-El on this one, again. Now you can see it with the series title and all that other good schtuff!