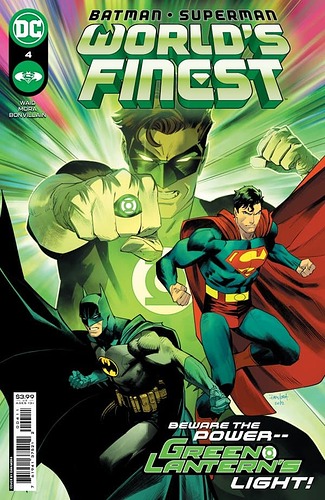 The Dark Knight. The Man of Steel. They are the two finest superheroes that the world has ever known…and they’re together again in an epic new series from the legendary talents of Mark Waid and Dan Mora!

In the not-too-distant past, Superman’s powers are super-charged from a devastating chemical attack by the villain Metallo…and the only ally that the ultra-powerful Man of Tomorrow can turn to in this turbulent hour is Gotham’s own dark vengeance: the Batman.

A nearly fatal burst of power drives Bruce Wayne to his own extreme measures to help his friend…enlisting none other than the Doom Patrol for aid.

As one of 2022’s most highly-anticipated ongoing series kicks off this Tuesday, March 15th, what are you most looking forward to from the latest title to chronicle Superman and Batman’s team-up adventures?

Are you excited to see Mark Waid back at DC (paging @CaptainYesterday)?

Is this your first Superman and Batman team-up book? If it is, what most excites you about this title?

If this isn’t your first Superman and Batman team-up book, which of their previous series is your favorite?

Chime in below, and let’s talk about the newest adventures of the World’s Finest!

Here’s a few of the card stock, cover price variants for World’s Finest #1 you can feast your 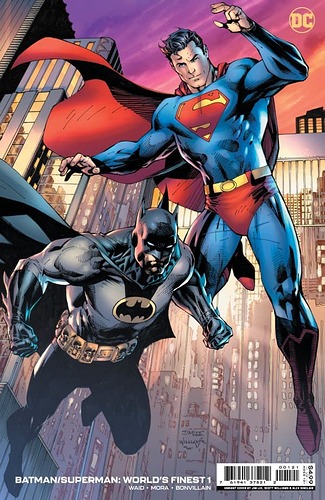 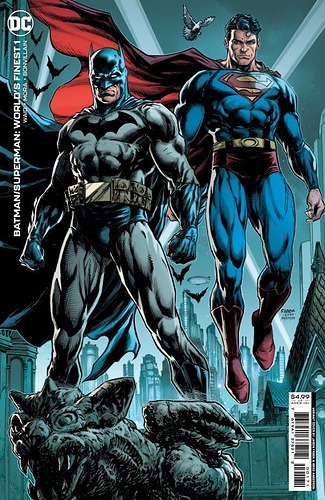 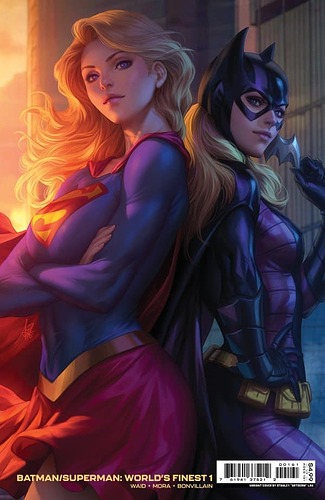 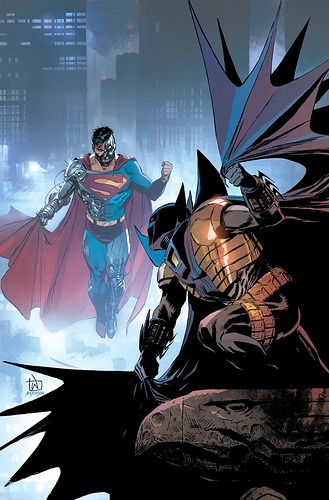 Oh, you KNOW I have preordered the Artgerm cover

I was going to nab that one and the Lee, Fabok and Weeks variants, but I think I’ll stick to just the regular (Dan Mora) and Lee covers for next week.

I have a feeling I might want to read this book in trade (as well as single issues), so if I hold off on the non-essential variants as they come out, I’ll then have those to look forward to when the eventual trades arrive.

The Lee Weeks cover is really, really tempting. But this book is already pretty expensive, and I don’t actually want the book itself.

I don’t actually want the book itself.

First it was the deviled eggs, and now you don’t want the debut issue of what is (so far) 2022’s most-anticipated ongoing.

Sorry! It’s just not my kind of book! And doesn’t have Steph in it!

Well, as long as you don’t bring your deviled eggs around, we can still be Batgirls-appreciating amigos.

I would rather not share my devilled eggs! They are all for me! (And Steph if she wants some

I would rather not share my devilled eggs! They are all for me!

I don’t eat while reading my comics! I don’t want my greasy fingieprints on my beautiful babies!

I don’t eat or drink anything while reading comics, either. It keeps the books beautiful and allows me to resist temptations I otherwise wouldn’t resist at other times.

Yes, I am excited for this new edition pairing the two greatest superheroes in the DC Uniiverse. I am expecting great things from Mark Waid.
And no, this is not my first Superman/Batman team-up book. You have to go all the back to World’s Finest Comics #159, August 1966, “The Cape and Cowl Crooks” by Hamilton, Swan, and Klein. I was ten and I was hooked!

I can’t wait for it to be in my clutches late Wednesday afternoon. (depending on when I get off the golf course)

My #1 writer of all time, the world’s two greatest superheroes, and a rising art star with a bright cheerful palate.

This won’t be my first Superman/ Batman team up. In fact, I think I might have them all in some form. (Archives, Showcase, etc)

I’m a little mixed on this. On one hand, the premise sounds interesting and Dan Mora is quickly becoming a new favorite. On the other hand, I haven’t been a big fan of Waid’s more recent work. Willing to give the first couple of issues a shot, though.

the world’s two greatest superheroes, and a rising art star with a bright cheerful palate.

YES! This series is going to rock.

This won’t be my first Superman/ Batman team up.

Superman/Batman was their first team-up title I followed as it came out (and it remains a candidate for my #1, all-time favorite ongoing).

However, I had assorted issues of World’s Finest when I was a kid (and I still have them with my other childhood DC books), so the idea of a title that starred the DCU’s top two was familiar to me by the time I got into Superman/Batman in 2003.

On one hand, the premise sounds interesting and Dan Mora is quickly becoming a new favorite.

Right? Mora is rising in my list of favorite modern artists as well.

On the other hand, I haven’t been a big fan of Waid’s more recent work.

I haven’t read any of his stuff since Daredevil (around 2010, or so), so I’m eager to jump back into an ongoing of his.

Given what a huge Superman fan Waid is, I’m hoping that he’s going to knock this book out of the park, and then some (maybe write a post-Dark Crisis Superman book, too?

Fingers crossed that World’s Finest is a winner!

Excited for this. The preview has a decent amount of action, and paints a very nice picture of the relationship between Clark & Bruce. Dan Mora’s art looks awesome. Loved his work on Future State and Detective. Far as Waid goes, well… Kingdom Come and Superman: Birthright, ‘nuff said.

Edit: Oh, not my first Batman/Superman book. My first was actually the New 52 iteration with art by Jae Lee (forget the writer; was it Greg Pak?). Thought it was mesmerizing at the time. The action figures based on that book from DC Collectibles look terrible though.

not my first Batman/Superman book. My first was actually the New 52 iteration with art by Jae Lee (forget the writer; was it Greg Pak?).

'Twas Pak. He wrote most of the series (#s 1-27), along with both Annuals and the Futures End tie-in.

Tom Taylor followed with issues 28-30, while Peter Tomasi finished off the book, with #s 31 and 32 as part of The Final Days of Superman.

SN: Having become a big Tom Taylor fan in the last year and change, I want to re-read his issues and see what I’d think of them now.

Artist-wise, I really liked Brett Booth’s very short (but very sweet) run the most. His art always has a nice, crisp,

to it and then some.

The action figures based on that book from DC Collectibles look terrible though.

Jae Lee’s art is hit and miss in my four eyes. While DCC made an admirable effort in translating his art to 3D life, I don’t think they stuck the landing (Catwoman looked the best to me, but even so, I passed on her and the other B/S figures).

I hope McFarlane is paying attention to this series, as it will likely have some toyetic schtuff in it (and if it gets us our first Metallo and Doom Patrol figures in the Multiverse line, then woohoo!

One day to go before #1 debuts!

Check the option that best applies to you regarding World’s Finest #1:

Already subscribed! Should just appear in my app when made available.