well its official the bat and the cat are taking a year-long break in order to deal with the fallout of the joker war which makes sense. All I can say is after 80 years of batcat dancing around each other I hope they will finally marry in the mainstream universe.

However, I also started listening to The Many Lives of Catwoman: The Felonious History of a Feline Fatale via audible and learned that around 41 or 42 batcat almost got married as bruce Wayne near the golden age before cats name was settled as being Selina Kyle. i was thinking that if it was 41 it would a great tribute if the too finally got married 80 after that book was released. However, I would just love it if instead of having them married in a batman book, they have the marriage in Catwoman’s book.

I hope they do get married, and soon. If writers or editors feel it would change the characters or stories too much, I don’t think it would have to. You could keep things the same, just have them married. I almost thought that’s what was going to happen in today’s issue. I thought Selina was going to suggest they elope right then, and then spend a year apart for the safety reasons Bruce was concerned about.

I haven’t read the issue but did read about it and I think this might be the last straw for me when it comes to reading Batman. The “break”, the loss of fortune, leaving the manor. Been there done that. I don’t mean this in some angry troll post kind of way, I just don’t think this title has anything to offer me personally anymore. It’s more like a throw my hands in the air and give up because it’s never going to happen. I don’t think we will see any kind of stability when it comes to Batman because writing him has basically become author therapy. It’s always about breaking him down, deconstruction, “and nothing will ever be the same”. Then the next team comes along with the exact same themes. As a fan, I feel almost no connection with DC at this point.

Speaking as someone who has read the book…I’d hardly call it a break-up. I mean, they literally say that they still love each other and it’s heavily implied that they have sex in his new place. That’s not exactly “break-up” sounding to me.

It sounds like to me that Tynion probably doesn’t really want to write Selina as a co-star of the book like King did (or at least doesn’t want to do the same things he did) and gave himself a way out without invalidating the relationship. It pretty much sounds like a long-distance relationship to me.

This is almost exactly how I thought it was too, after reading it. Taking a year for them both to figure out themselves is probably because Tynion has some cool solo stuff planned for Batman. And probably the same for Catwoman’s book. (I don’t know who writes that one.)

Though, I don’t mind either way. I’m not a big Catwoman fan so this doesn’t bother me at all.

(I don’t know who writes that one.)

Thank you. I read JLD but not Catwoman. Didn’t realize they were the same writer.

they may have very well done this. we will have to wait for Catwoman’s next book

I am also getting the feeling that the the reversal of doctor manhattans changes to the time stream has yet to be resolved and corrected yet. so the future shock thingy that’s going on next year could be the timestream fixing istself and some kinda correcting course will happen that will involve Clark (dr manhattans successor)

I hope they do get married, and soon. If writers or editors feel it would change the characters or stories too much, I don’t think it would have to. You could keep things the same, just have them married.

Don’t get it twisted, I’m not one of those guys who say that “married superheroes can’t work / it makes them boring” and all that, because that’s lazy.

But I think with Bruce and Selina it’s a little harder for them to do something formal like that. I mean, biggest problem – she’s a known thief, wanted all over the world. It would be impossible for Bruce and Selina to have an official marriage license, especially since it makes it more likely for people to figure out the secret.

And as the issue shows, while Bruce could conceivably give Selina a new identity to live in Gotham with him, it would feel as false and wrong for Selina as it would be for Bruce to give up Batman and Gotham.

I think King did it best at the end of his run – they love each other, they always will, they’re together in every way but a vow, and why do they need to have some judge sign a piece of paper to prove it?

However, I also started listening to The Many Lives of Catwoman: The Felonious History of a Feline Fatale via audible

Always looking for a new DC audiobook! Thanks for the rec.

True they do not need the piece of paper, however, they also both have rings on their fingers in Helena and last rights…personally I do not mind if they wait till there golden years to get hitched…but I also want a crazy DC wedding event complete with Hangover level bachelor and bachelorette parties for batcat and the drunken ladies of the league having to save the men form some form of ‘event’.

Plus I do not find it fair to batman that superman always gets to marry Lois and when she gone wonder woman yet not only was Catwoman was withheld from the pages of Batman books for 12 years due to a certain book, batcat never gets to get together in the mainstream. from hush to identity crisis to freaken killing off batman in final crises. batman would be even stronger with something to live for and going home to the love of his life would help keep him alive.

well, at least we have batcat official in the nail books, Gotham by gaslight(movie) earth 2’s. I have a love-hate relationship with Kingdome come, on one had its a great series, on the other its what started lonely old mand bruce.

but I also want a crazy DC wedding event complete with Hangover level bachelor and bachelorette parties for batcat and the drunken ladies of the league having to save the men form some form of ‘event’.

Oh yeah, that would be fun. I’d like to see something like that, even if it’s like a dream that one of them have or something for a one-shot.

batcat never gets to get together in the mainstream. from hush to identity crisis to freaken killing off batman in final crises.

I guess that depends on what you mean by “mainstream.” Remember, billions more people have seen this than read any of those comics: 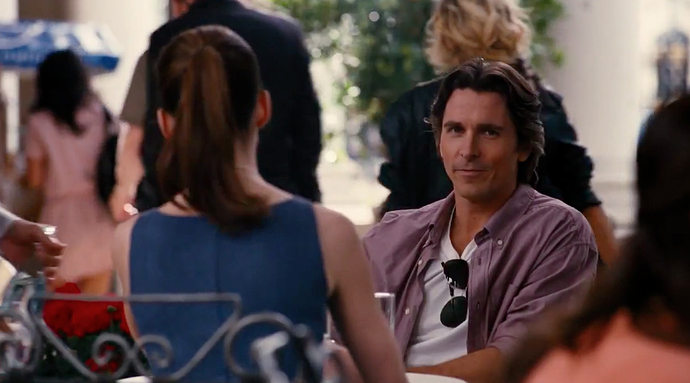 I have a love-hate relationship with Kingdome come, on one had its a great series, on the other its what started lonely old mand bruce.

I think technically Dark Knight Returns did that first, though in the end, while single, he wasn’t really “lonely” (neither was Bruce in the end of KC), and even there was still obvious affection and love for Selina. 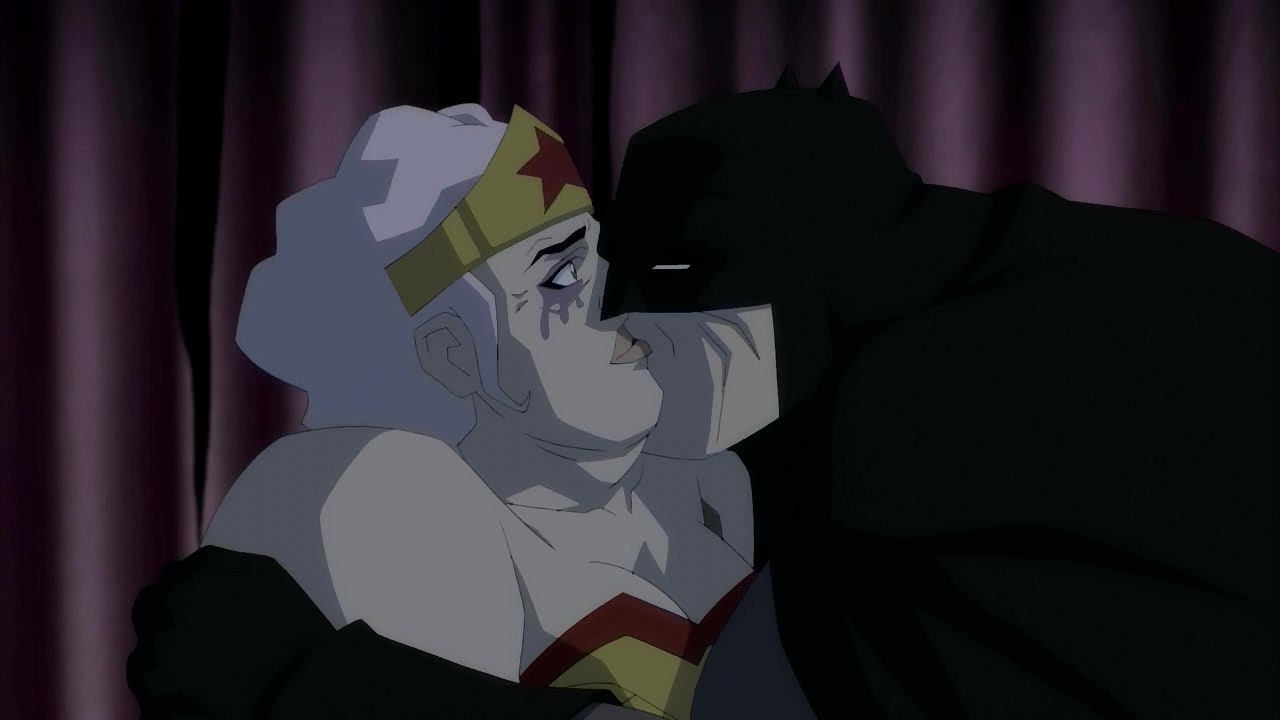 Rephrase: bruce and Selina never get together and stay active as the bat and the cat in the main steam. (blushing emoji here)…They do in Helena.

PS: would have been great if they had de-aged the cat in DKR:III aswell.

Read it yesterday, liked it. I don’t really care if Batman and Catwoman stay together or break it off, just tiered of the back and forth with it. Make it happen or not, but stop with the on and off again stories it’s annoying. Excited to see Batman get back to the core basics with less gadgets and ppl in his ear. I’m sure Bruce will go with Fox’s play but I don’t really want him to step down from Wayne Enterprise or let Fox keep his money. If it were me I’d say hell no to his plan. I’m along the lines on how Captain America felt with the whatever it’s called country accords. By doing this Bruce will lose the ability to decide what’s best for the company and its direction. The safest hands are his own. Fox and his family may have a change of heart one day, then what? How will these decisions effect other members of the bat family and how Bruce’s capital and resources aid in their crusade? Yeah, no sorry, I’d say F**k that, you’re not keeping my money or having me step down. Fox you wanna acquire the proprietary tech advances you designed while under contract with Wayne Enterprise, we can open up negotiations. But I’m not gonna play your little power game with the company my family and I built nor buy into the notion that these PR issues can’t be resolved over time.

I just realized half the money joker stole is missing. The foxes only have 50 billion total so eather joker blew threw 50 billion in a few weeks or Selina kept a good amount of the money cause joker had 100 billion dollars at the time of the heist.

cat is still in Gotham and so is bat. so we hopefully will get another fuffy date book or two out of this…i think the new fox brother might be the new batman instead of luke.

Besides Selina keeping a cut, remember she had to give a cut to the penguin and the riddler. I don’t remember exactly how joker acquired bruce’s cash but I wonder if the banks would work with him on that 50 mil in some way. Can’t imagine he’d get anywhere near what was spent though on the premise of fraudulent charges or an FTC identity theft report

His accounts were not exactly legal. also, Selina screwed over Penguin and Riddler. Its why she needs a year to sort things out.

Where they not legal? Was Selina getting one over on Penguin and Riddler in one of the tie-ins? If not I’m drawing a blank on that one. I’ve got like 19 different titles I’m reading at the moment not including the digital stuff on here, some details will go by the wayside.

It happened in Catwoman #25! A great read.