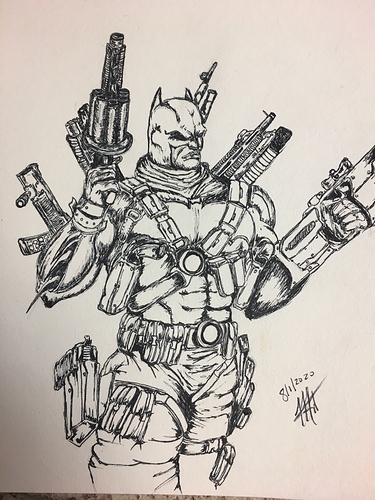 Saw a statue of this and had to draw it, Batman meets the Punisher is what I’m calling it

Have you ever read the Batman Who Laughs. I think you’d like it.

I just started to read them last night lol although I have drawn him several time.

Looks fantastic! I especially love all the details in the guns and on the straps/buckles. This Batman is definitely making up for his counterpart’s “No Gun” rule

Awesome! Thank you for sharing. A bat skull would look awesome on his chest… just sayin’.

My first thought was “So this is what would happen if Batman was created by Rob Liefeld.” -which I’m not saying to knock your work, just that visually, the first person these aesthetics called to mind wasn’t really the Punisher - who despite his penchant for heavy weaponry has a fairly basic, stripped down costume - but rather Cable and some of Liefeld’s other more “cluttered” designs. Not sure what the original statue you saw was based on, but that’s what sprang to mind for me.

I found out later, while reading the Batman who Laughs, that his name is The Grim Knight. He came from a world where Bruce picked up the gun after Joe Chill shot his parents and he shot Joe Chill. Anyways, your right though, for me I thought of Punisher first probably because I just finished the series on Netflix lol But Cable would definitely be a thought as well. Thank you

And welcome to DC