Batman Death In the Family

I just wanted to say that I waited until 12am to purchase this movie and it wasn’t interactive like they said. I love the story about Jason Todd becoming Red Hood but this movie only lasted a couple of minutes. I bought my movie off of Amazon Prime but maybe you guys had better luck! Anyways please tell me where I can find the interactive version. Thank you Batman Fans!

Apparently only the physical copy of the movie has the interactive experience and not the digital.

Update/Edit: At least from Amazon and Apple it’s not interactive. I just checked with Movies Anywhere it lists the movie with the alternate routes + extras. So still not interactive I guess but you can watch the other routes in a linear/pre-assigned way. Dunno how the site works so I’d just go with physical to save the hassle 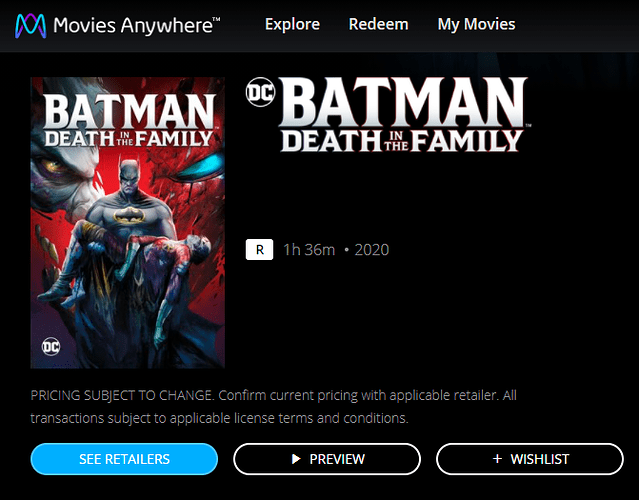 Thank you I watched it via VUDU \ movies anywhere and no interaction. Only 25 min long cliff notes ver of under the red hood then a sgt someguy movie that was 45 min long ordered the blu-ray via Best Buy gonna ask for a refund.

I’m gonna ask for my refunds as well! This really sucks

I remember hearing only the Blu-Ray was going to be interactive. This might have been either a few months ago or at Fandome. I waited until recently just so I can do my due diligence and not make the same mistake others here have made and assumed the digital version would be interactive. I’m glad I did. I picked up the physical copy today and so far it’s a lot of fun!

I got digital and yeah it wasn’t interactive. Kinda dumb. You can still watch all the choices though. Without spoilers, of the new ones, my favorite was definitely the Red Robin one.

I love the choices, but also the ability to back track when you’ve reached an ending.

You know what else surprised me? There’s a variety with the endings. It’s not all doom and gloom. A couple are downright nice. There’s some that are gut punches, though.

I was wrong. One of the endings was missing on digital

Hey superby. Can you give a rough estimate of how much of the collection features scenes used in the original Red Hood movie? I saw a lot of reviews make the claim that it was a significant chunk, which was my main deterrent in picking up a copy. I figured people might be exaggerating, though, and was waiting to hear what DCU had to say.

@CynicalPink, if you chose one route, it’s basically Bruce doing a recap of the movie (clips played over his voiceover, but it leads somewhere with the final scene), if you chose other paths you’ll see some clips of the movie but changes depending on what choice you made (the scene with Red Hook and the bazooka aimed at Black Mask and him showing up at the warehouse are two examples)

In a strange way, having seen Under the Red Hood might actually be a benefit for this interactive experience as you can see the scene coming and think you know what’ll happen but then see it veer off in a different direction.

I know people’s main issue was the aforementioned path where it’s basically a recap of the film, but like I said, it leads to one of the nicer endings.

I have to wonder if people know this is a collection of all the second wave Showcase shorts or if they think this was just supposed to be the Death in the Family experience? I’ve seen some people online thinking they threw in the other shorts as a scam because they thought the Batman portion wasn’t long enough.

I wouldn’t be surprised if a lot of the loudest complaints are because of what you just mentioned in that last paragraph (hard to use the quote function on phone - sorry!).

Thank you for giving me your take! As a huge fan of the Red Hood movie, I like the idea of these new shorts building on it. Your reply makes me more confident about giving it a shot.

I will say you can spot the old and new footage and the voice actor for Jason is different, but it’s fun to see the different directions you can go. I bought the physical copy after reading the interactive features weren’t available on the digital one…well, that and I have the other showcase shorts collection on Blu-Ray as well and I wanted them side by side on my shelf.

My entire collection is hard copy, so when this one gets bought, it’ll follow suit. All the better that I know that’s the intended format.

Hope to hear your thoughts on it!

Honestly ridiculous that the digital versions aren’t interactive - considering that interactivity was basically the entire selling point of the product!

I just assumed it had something to do with either function or availability.

Take Netflix’s Black Mirror: Bandersnatch, for example. You could only watch it on either a smart TV or compatible device. When I tried to watch it on an Apple TV, it played a video message saying it wasn’t available on that device. Maybe they couldn’t have the interactive features work digitally on all platforms.

Plus, with the physical version, all it’s really doing is accessing a point on the disc.

Welcome, for what little I could add to the discussion! I think I’m going to wind up waiting until next payday to pick it up, but I look forward to talking about it with everyone once I get my hands on a copy.

I read or heard months ago that only the Blu-ray would be interactive, and I have to assume it’s because of functionality, otherwise why would they not make the streaming version interactive? Obviously, however, they should have made this more clear.

A word of advice…while going through the different endings, write out a little flowchart so you know what paths you still have to check out. I lost count and for no other reason than to see them all, I watched a few over again by mistake trying to find the paths I missed! I was pleasantly surprised that some individual paths themselves have multiple endings. I found this whole thing to be very cool and hope they do it again.

It reminds me of “The Cave of Time.” If you know what I’m talking about, you’re old like me! LOL!