Ok, I was right when I said this ties in with Batman Anual number 2, Catwoman 80th/ detective comics 1000/ detective comics 1027 stories that were written by tom king connect to this story in some way. =) I wanted to get this written before I go to bed so I will have more to say in the morning.

This series is its own cannon spanning several books it starts with batman’s annual number 2/ Detective comics number 1000 story batmans greatest case, detective comics issue 1027 story Legacy Catwoman 80th Helena and Batman/Catwoman. I think there is one more story but am not sure what it is.

Yup! I love this issue, and how it gives Selina her own Batman Annual #2 (one of my absolute favorite issues by King, especially with the amazing Lee Weeks art, and I’m sad he didn’t get to draw much in this, but at least he got a great cover).

this also ties into the world before doomsday clock world, with 2018 Catwoman being when continuity changed back to the infinite frontier with the reintroduction of Maggie Kyle, combined with the effects of Thomas Wayne and dark night’s metal (and possibly death metal) along with the gift explains why Catwoman 2018 did not sync up with batman until the joker war and how. the events of Batman vol 2 issue 48 do not match up with the events of batman vol 3 issue 84 (flashpoint)being brought into the mainstream earth prime could be explained by this if it makes sense. it could also explain the Deus Ex Kitty moment.
I just wish we got a better look at Helena’s robin costume…although it could have been funnier if they went with Catgirl for Helena. perhaps in next month’s issue.
however, it was especially fun to see how batcats relationship evolved throughout Selina’s life.

Oooh, how do you see it “fixing” those discontinuities? I didn’t notice those things before.

Ok just compared batman vol 3 49 page 9 to 84 page 6…Catwoman is not there it’s just the joker and his injuries do not line up =) he has a nasty scalp wound (which bleeds a lot) something causing him to bleed from the mouth and no cut throat. the dead bodies do not match up eather. this also explains the square box. The Reverse-Flash actually brings Thomas Wayne to a point in time that changes history. he gets there around the time bruce pops the question to Selina. likely he gets there at the start of rebirth, thus creating a new timeline. 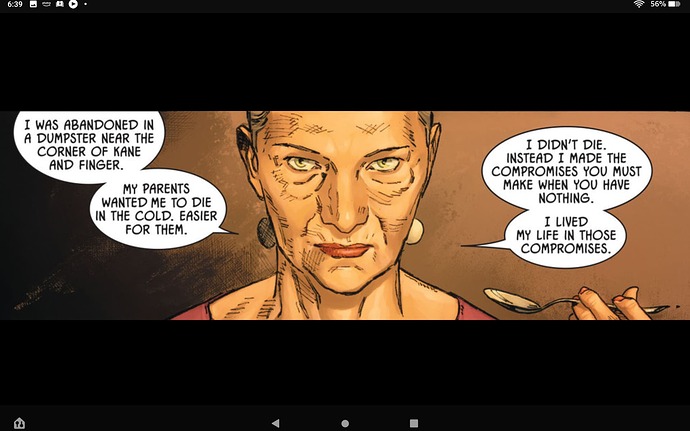 I did not! Brilliant!