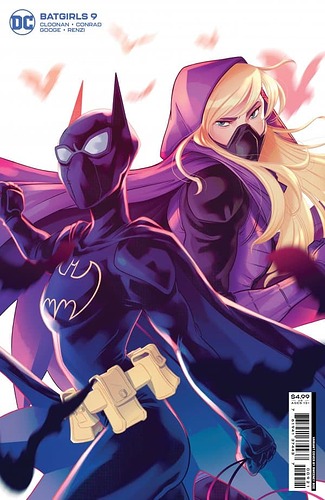 The wait is just about over, as Batgirls #1 officially arrives next Tuesday, December 14th!

Whether you’re Team Cass, Team Steph or are just Team Batgirls in general, how excited, jazzed, pumped and, yes, I’m going there, BATTY are you for this series to finally begin?

IDK about the rest of you, but this guy is excitedly pumped and jazzed beyond batty belief for Batgirls!

Talk about Batgirls #1 and your expectations for it, as well as thoughts on #1 once you’ve the book in-hand.

Spoilers are fine to discuss, just blur them, please. Batgirls of all types don’t approve of spoilers that ruin everyone’s good time, afterall.

Finally, here are some rad variant covers to feast your eyes upon as we patiently wait for the series to begin in just 7 days (I hope you’re excited, because I surely am!).

Babs Tarr (a legend within the Batgirl franchise). 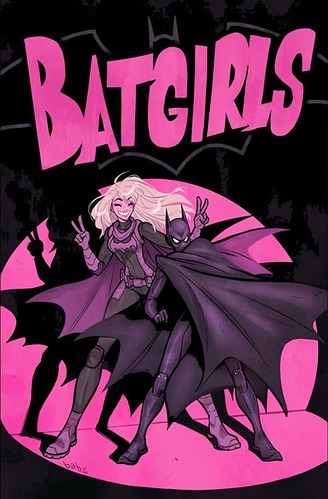 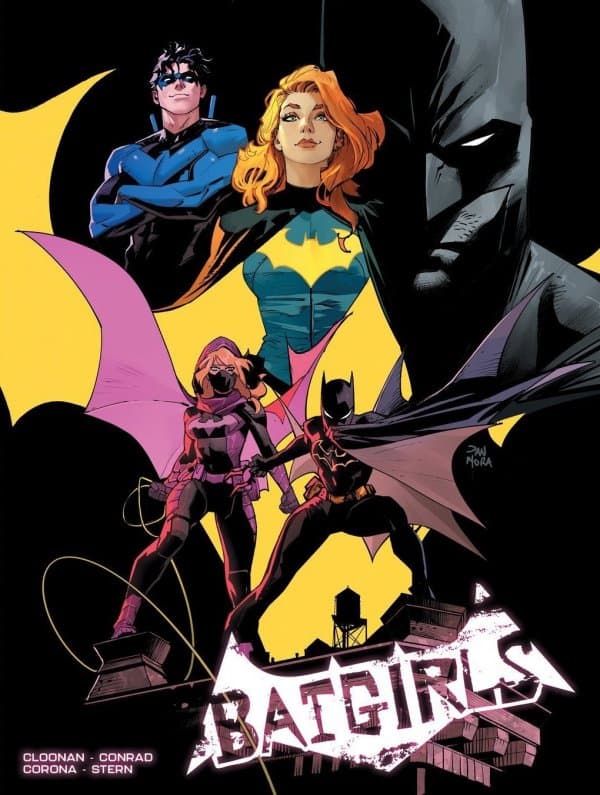 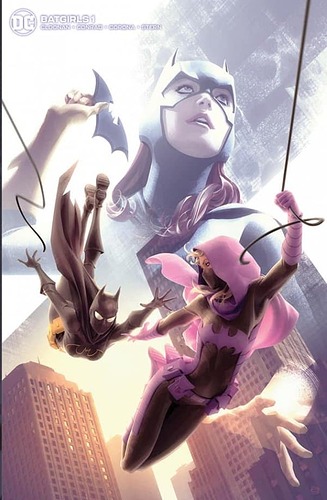 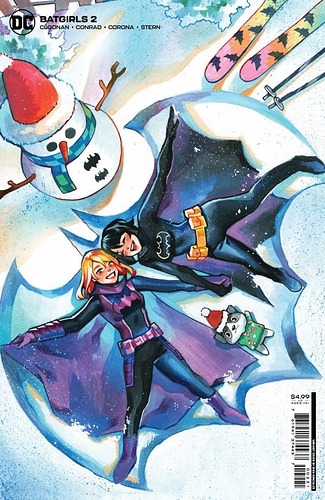 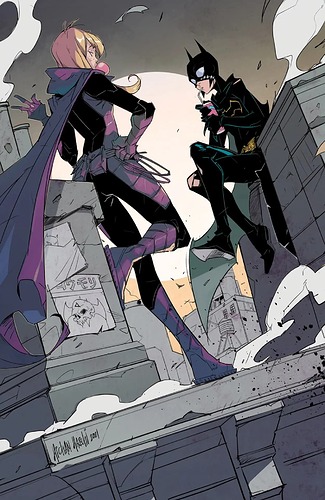 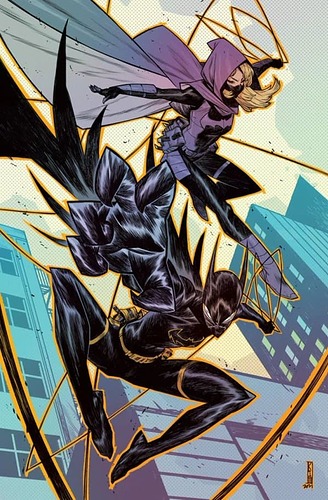 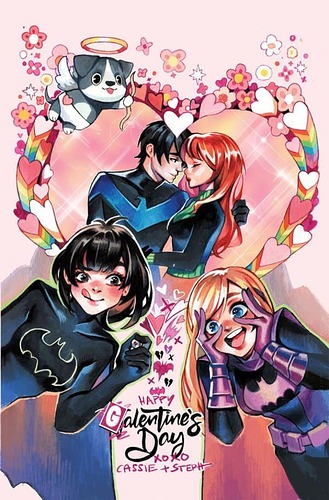 Thanx for building this @Vroom!

I’m loving the logo and all the variants. I think Dan Mora and Alex Garner are my faves so far. Has all 3.

Thanx for building this @Vroom!

You’re welcome, and thank you for the Karen Gillan gif. She’s pretty.

I think Dan Mora and Alex Garner are my faves so far.

I’m leaning towards the Babs Tarr variant for #1 as my fav. I really dig how the purple and black mesh together on it just perfectly.

I would buy that piece next week, but its a TFAW exclusive, so I’ll just get the regular cover in all likelihood (or maybe the Dan Mora variant), while I drool at the BT variant on my screen.

That one’s awesome too! They’re all pretty great— an embarrassment of riches, really.

You’re welcome, and thank you for the Karen Gillan gif.

I was going to grab another gif, but instead I’d like to recommend a movie of hers

an embarrassment of riches, really.

Right? I was staring at the variants for #1 a few minutes ago, thinking “I’ll get this one, no, that one!”. Oh, what’s a Gotham-born Kryptonian to do?

The Garner piece is pretty slick. I posted the B cover, while the A piece is the same art, but with the Batgirls logo on the bottom, instead of the standard variant info at the top, like the B cover has.

I was going to grab another gif, but instead I’d like to recommend Gunpowder Milkshake.

Must be good if it outdid another KG gif.

makes a note to look into Gunpowder Milkshake which, going by the title alone, sounds pretty damn rad

This is my favorite sentence of the day.

makes a note to look into Gunpowder Milkshake

If nothing else the fight scenes are good fun, but I enjoyed it. Whatever that’s worth.

This is my favorite sentence of the day.

I enjoyed it. Whatever that’s worth.

You recommended the flick with Charlize Theron that was based on a deal by Greg Rucka, and I really liked it, so if Gunpowder Milkshake has your SOA (seal of approval), it must be good.

resumes his examination of Batgirls #1 covers

So, is it artist prerogative that Steph has the lower-half mask again, or was there an in-story reason why she ditched the full-facemask?

Don’t forget these ones!
Joshua Middleton (who did a great series of variants for the Rebirth Babs Batgirl run) 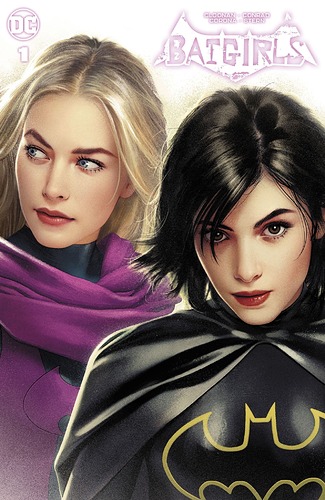 Kendrick Lim (masked and battle damaged vs. unmasked - you decide!) 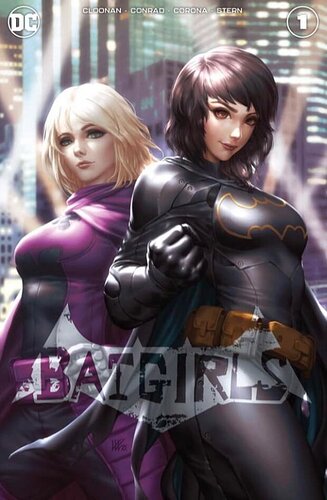 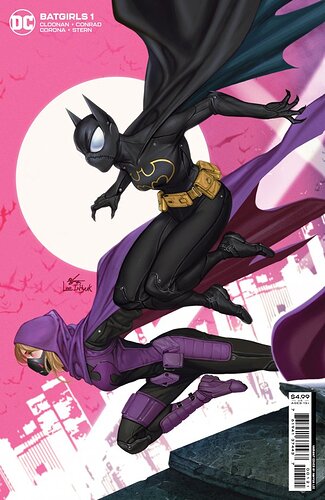 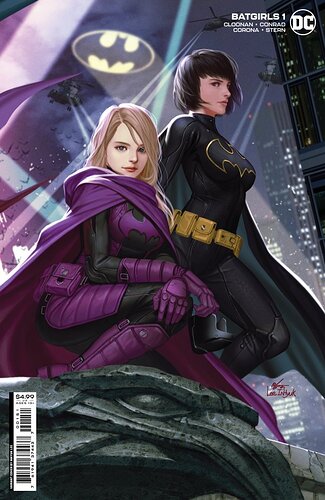 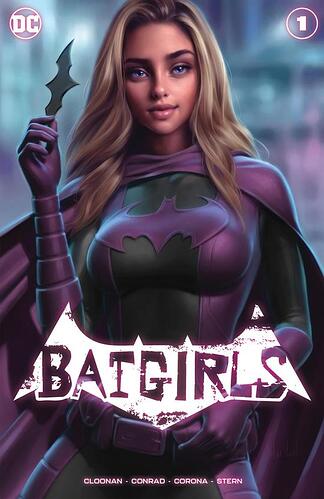 And an Artgerm Steph and Supergirl variant promised, though it’s kinda late for it to be revealed at this point…maybe for a future issue?

I’m quite excited for this run - I am hoping it has connections to Steph’s Batgirl run and Cass’s Batgirl run - I’m a Steph fan (obviously from my profile pic) - in that it will have a good look at the character’s motivations, give them some solid feats and fights, victories over villains new and old (preferably old, since that gives them better bragging rights), and adventures like the one-shots in Steph’s run that are still beloved.

And an Artgerm Steph and Supergirl variant promised, though it’s kinda late for it to be revealed at this point…maybe for a future issue?

One can hope, as I

Actually, per his instagram, the cover with Steph Batgirl and Supergirl on it is “a regular variant” - so maybe it’s a future issue, maybe it’s something like Justice League Incarnate or something dealing with the multiverse?

Being that I don’t use Instagram, do you have a pic of it available?

Or was it just a “I’ve been working on a cover featuring Steph and Supergirl.” post with no art attached?

If it’s a regular variant, I’d likely buy it.

I’m a little bummed that right now it’s just Cass and Steph and would have loved to see Babs in the field with them, but I’m cautiously optimistic about this one.

The preview pages I’ve seen are decent, though I kind of feel like they might be making both characters a little too young and hyper, if that makes any sense. 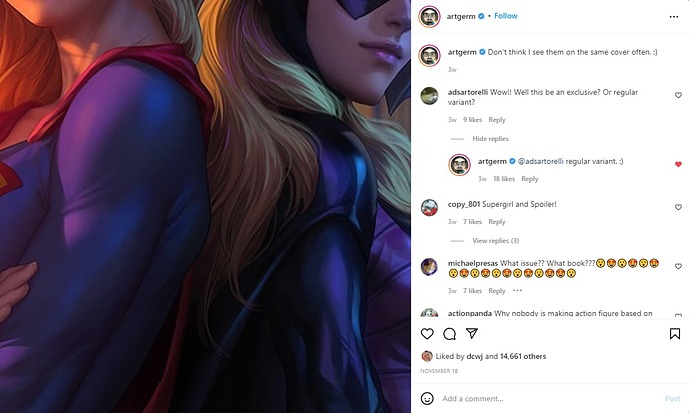 image1237×741 61.7 KB
Here’s what I have! It’s clearly Steph’s original Batgirl outfit, not her current one. No clue what title it’s attached to - the multiversal theory makes a bit more sense given the difference in Batgirl costumes.
3 Likes
millernumber1 December 9, 2021, 6:21pm #15

I’m ok with it being Cass and Steph as the main two Batgirls, though I’ve personally been pushing for Babs, Cass, and Steph as the League of Batgirls since 2014’s Future’s End Batgirl one shot, since I think that’s the best way to get the fandom all together instead of fighting with each other.

I did love Gotham Academy

Likewise! I still need to read Second Semester, but the original series was great, and a ton of fun.

I’m hoping Babs will play some role in the series, even if it’s just a den mother to Cass and Steph.

Second Semester was a little step down from the original series, partly because even though Adam Archer is a fine artist, he doesn’t have quite the verve of Karl Kerschle (who is writing and drawing a Maps backup for Batman #119-120, at least, maybe 121 too!). It does wrap up a bunch of questions I had about the first series, though, and is a good addition to the series.

I think Babs will be a pretty big presence, though more in an Oracle role. I love Oracle dearly, but I worry that setting Babs fans up to be against Steph and Cass fans will be bad for the series.

But I hope not. I really, really want this book to succeed and become another triumph for Steph, Cass, and Babs.

Regarding Kerschl, I dug his work on The Adventures of Superman (most of his issues aren’t in our library yet

) with GA being my second-favorite work of his. Good, good stuff.

I tried the first issue of Lumberjanes/GA, but I never read any Lumberjanes, so I was very confused, and the Gotham Academy stuff seemed very backseat. Maybe it got bigger in the later issues, but the art was also not something that drew me in.

I think I’ve read a few issues of that Superman stuff, though his style has evolved a lot since then. He did post this amazingly beautiful Superman fan comic the other day! Superman Short Story – 01 | karlkerschl

I kinda wish/hope that since Cloonan is working on Batgirls, we’ll get some of those GA characters!

I kinda wish/hope that since Cloonan is working on Batgirls, we’ll get some of those GA characters!

If Batgirls has an arc where GA characters are heavily focused upon, I will be in heaven.

I’d also be in heaven if we ever saw Gotham Academy in animation as a TV series and with character designs by Kerschl.