Guys, I don’t think Babs should be in a relation with Batman or Nightwing.

Batman is too much of a mentor—the power dynamic is too unequal for a relationship to feel natural.

Nightwing is too similar. The dynamic does not bring out interesting tension or contrast and, in the hands of the wrong writer, risks making Babs a second fiddle.

I think it would be best to have her with a normal but supportive guy—maybe even like a male oracle—or someone with powers that isn’t directly connected to the bat family who has a hard time with that aspect of her life. My two cents.

I pretty much agree. Not sure who Babs’ ideal love interest is, but dating inside the Batfamily feels a little incestuous to me.

I think the best would be someone untainted by Gotham. Someone that brings light to the book instead of darkness.

I have enjoyed BG most when she is having fun. I don’t think Nightwing brings that to the table.

Sorry, but I ship Batgirl and Nightwing. I remember Dick was so sweet in this issue. 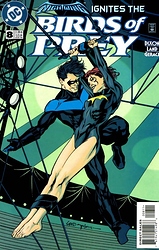 I agree. Did you see Babs and Ted Kord flirting in Birds of Prey? I thought that was cute, and I wish that they’d explored it more.

I hate the idea of Bruce and babs, really messed up if you asked me. However I like the dick and babs relationship. It works for me, but it would interesting to see babs in a relationship with someone else. Along as it works, then swing away

The relationship really flies in that issue

Babs and Dick - Definitely
Babs and Bruce - Not at all, he is way too old for her. That movie where they hooked up was a bit uncomfortable to watch.

Outside the bat family ? Honestly, Dick is the best choice, but maybe Conner Kent ?

I remember people shipping Jason and Babs- is that still a thing?

So, I don’t think that there’s anything incestuous about Babs and Dick dating because she’s not an adopted ward of the Wayne family, and they were very much just childhood friends. I also couldn’t disagree more with the concept of them being too similar. They are in fact, very different and complimentary. He is an idealist who keeps her hopeful and she is a pragmatist who keeps him grounded. He is always either living in the past or running from it whereas she is better at moving on and working with what she has going for her in the now. She can be a bit overly introspective and duty-oriented, and he helps take her out of herself with his joie de vivre and optimism. However, they also have many shared experiences and a deep friendship in common. They can definitely have and have had unhealthy moments, but I think these two were written for each other, and if DC was honest in their writing of these characters (instead of using their relationship to create drama) I think they would allow them to be together.

All that! Annnndddd too much History between the 2 to look beyond now! Babs or Kori is a Topic for a reason lots of fans have vested interest in this lil bit of “Soap-iness” With the Original Boy wonder and his 2 loves!

There’s always Jason Bard, her original romantic interest, back when she was noticeably between Batman and Robin in age and presented as her own character and not a romantic interest for one of the main characters. She and Jason were engaged once. Honestly, I’ve never seen a reason for Dick and Babs to be paired together besides convenience.

I like to think we haven’t been introduced to Barbara’s soulmate yet.

That idea feels the most comfortable, and in the hands of a great writer, could provide greater opportunity to tell a more layered story versus simple blog factory production line beats of some action framed between constant focus on some sort of intimate relationship.

So yes I tend to side with yeah, Grayson is 'aight, but he never lands past a sibling/peer like contemporary.

I ship her with Kalibak.

I like her with Nightwing well enough, but I wouldn’t mind seeing her with a different superhero partner.

…Huh. I just thought of someone potentially interesting. What about Cyborg? Both tech-y based heroes who have dealt with great adversity and deal with issues involving disability. They should at least interact more and at least be good buds.

The Dick/Babs ship only serves to shackle Dick to the Batfam further. That’s why they keep doing it. So yeah I agree she needs someone else.

You couldn’t be more incorrect about Dick. He does not live in the past. Dick’s story has always been about moving forward, evolving, and growing. The entire point to his character is that he’s the complete opposite of Batman and doesn’t allow his trauma to define him. He moves forward when he left the Batfam for college/Titans. He moved forward when he grew out of Robin and became Nightwing. Dick has always looked toward the future. He has never run from his past, he’s embraced it and used it to become a better man and hero. How is any of the living or running from his past? Don’t ever disrespect Dick like that cuz if anything it is Barbara who can’t let go of the past. She is the one who experiences an aggressive form of Ptsd every time joker shows up with a new plot, constantly acts like she has something to prove since getting out of the wheelchair, and struggled embracing her role as Oracle needing Dick to make her feel like Batgirl again in order to pull her out of her slump! Don’t play in Dick’s face like that cuz he doesn’t need Barbara or the Batfam, Titans, not anybody to be grounded. Dick needs NO safety net, he is everyone else’s!