Has anyone else read it? Do you agree with Cass’ decision? Puckett did a great job making the father a sympathetic character while simultaneously drawing a parallel to Cain.

I was gutted, but I think I ultimately agree with her choice. If we could know more about the dad’s history, my opinion might be different, but the 5-minute exchange wouldn’t have convinced me either.

I’m heading to bed, but if anyone is looking for a quick read, give it a go. I’m really loving this run.

I don’t recall this issue offhand, but I’m sure I’d enjoy a reread of it as this series is my favorite to bear the title of “Batgirl”.

It’s turning out to be mine, too.

I’m not sure where Cass stands nowadays, but this series is one of my favs in the Batfamily run from back then. I like the dynamic between her, Oracle and Spoiler.

So I gave it a read just now, and it’s another great, personal story from Puckett with emotional subtlety. I sometimes forget writers were capable of subtlety.

The real question is, does Cassandra agree with her decision? This guy is still a criminal, had taken the girl before, admitted to being a thief, and that “it’s all I know” line is probably an indicator that he wasn’t going to stop being a thief. The Mom that cares about money, she is morally in the wrong–but she hasn’t broken the law. Cass is following Batman’s lead, even though it doesn’t feel right leaving the girl in the care of an exploitative parent. What might hurt even more, is that our gal is uniquely qualified to confirm this; she doesn’t just think thieving Dad genuinely cares while Mama-Hoity-Toity really doesn’t–Batgirl knows.

It reminds me of Batgirl #16, where that little boy asks her to help his Dad. Seeing him get a beat-down was oh-so-satisfying. In both cases, she’s doing her job, trying to help a helpless kid, but this time, it’s kind of a “rock and a hard place” that hits home for her. The girl can live in luxury and be attended to, or she can live with love by being cared about. That’s something important for Cass to accept, not just because of similarity to her own childhood, but it’s likely to happen in her crime-fighting future.

Also, Cass should be wearing goggles when using a torch. I mean, really!

Thanks for giving it a read and chiming in!

Part of what I really love about Cass is how limited our access to her thoughts are. In another author’s hands, her literal silence might mean a waterfall of text boxes constantly spelling out what’s on her mind, but Puckett and crew leave most of it to our interpretation.

I’m not sure if Cass agrees with her own decision, but I wonder how much she recognizes the degree to which she’s projecting on the situation: 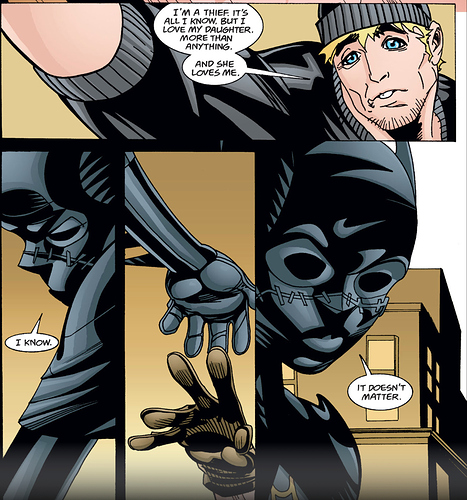 Cass believes Cain truly loves her, and as much as she tries to reject the sentiment, deep down, a part of her loves him, too. But Cain also repeatedly shot and beat her, and coerced her into murder. At what point can a person say “Love alone isn’t enough” or “If that was real love, then he wouldn’t [insert].”

In Cass’ life, the answer is more clear.

But with this dad, we just don’t know. Did he come by the Rolex from a slick pickpocket move, or is there a dead/injured man in an alleyway somewhere? The comparison to #16 is a great one, since that shows a similar story from a more b&w perspective. Easier to be the hero in those cases.

Also, Cass should be wearing goggles when using a torch. I mean, really!

Ha! Blame it on bad parenting?

Cass believes Cain truly loves her, and as much as she tries to reject the sentiment, deep down, a part of her loves him, too. But Cain also repeatedly shot and beat her, and coerced her into murder. At what point can a person say “Love alone isn’t enough” or “If that was real love, then he wouldn’t [insert].”

Which is why their dynamic was so interesting. Some, like Linkara of Atop the Fourth Wall, think David may’ve cared about Cassandra, but didn’t love her. I see plenty of evidence to suggest he did love her, but because he’s a committed assassin, his expression of that love, and desire that she get into the family business, had more horrible implications. Yes, he had been trying the “train’em young” strategy for some time before Cass was born, but it’s not uncommon to see posts on social media or otherwise hear from parents that they “didn’t know love” until their child was born. In Cain’s case, he molded her into the perfect weapon instead of looking up private pre-schools or getting Baby Mozart DVDs. Probably just well, I hear those don’t do much, anyway.

This is something that could be worked with and built upon for years, with the right writers–but we all know why that prospect has hit a snag.

If only we could see that theme explored more these days!

And I 100% agree that Cain loved Cass. Like you said, his expression of it took some horrible turns, but in Cain’s heart, I doubt that made them any less sincere.

Has Cain ever been given a backstory?

Pre-Flashpoint, I only recall that he trained Bruce Wayne, and a later retcon that his “create the perfect assassin from infancy” plan was done to serve the League of Assassins. As far as what he was like as a kid, how he got into the killing lifestyle, I don’t remember reading it in the Batgirl title. It’s been a while since I read most of them (reviewed a couple dozen issues last year for my YouTube show), so it’s possible there’s some dialogue or a brief panel I’m forgetting.

The most we got in Batman & Robin Eternal was that he was on the streets of Hong Kong when Mother took him in (and suddenly Chinese now, I guess?), he loved killing, had no personality and–well, that claim of him not loving Cassandra sure fits now.
[Angrily shakes fist at Tynion]

Hoo boy. I am super far behind and am gradually catching up, but I keep hearing bits and pieces of where certain characters were taken that make me appreciate my temporary hideout in the past.